It is an idea that may never have been tried in wide-scale vaccine distribution: Citing principles of equity and justice, experts are urging that people living in communities hardest-hit by the pandemic, which are often made up of Black and Hispanic populations, get a portion of the first, limited supply of coronavirus vaccines set aside just for them.

A committee of experts advising Dr. Robert R. Redfield, the director of the Centers for Disease Control and Prevention, is considering the idea. But as it comes into focus, its underlying concepts and execution must be further defined, and the approach may then face legal and political challenges, even as the medical system grapples with the anticipated logistical hurdles of distributing new vaccines.

The group that is formulating the allocation plan is the Advisory Committee on Immunization Practices, which consists of experts in medicine or public health who advise the C.D.C. on schedules for providing vaccine schedules for diseases like flu or chickenpox.

It will discuss a variety of ethical issues during its next meeting on Friday, but members say it will not vote on a final proposal until a vaccine receives either full approval or an emergency use authorization from the Food and Drug Administration, likely weeks or months from now. There are currently four vaccines in late-stage trials in the U.S.

The current plan under consideration draws heavily from several proposals, particularly one developed by the National Academy of Sciences.

Dr. Helene Gayle, the co-chair of the committee that devised that framework, noted that the issue her committee grappled with was racism, not race. Racism leads to social vulnerability, she said, with people holding low wage jobs that place them at higher risk of infection and living in crowded neighborhoods and households.

“Inequities in health have always existed, but at this moment there is an awakening to the power of racism, poverty and bias in amplifying the health and economic pain and hardship imposed by this pandemic,” said Dr. Gayle, a former infectious disease specialist at the C.D.C. who is now president and chief executive of The Chicago Community Trust.

Such impacts are seen in the way that some groups, including people living in crowded neighborhoods with jobs like nursing home aides — situations that tend to apply more often to people of color — are getting sick and dying from Covid-19 at a much higher rate than the rest of the population.

Dr. Eboni Price-Haywood, director of the Center for Outcomes and Health Services Research at Ochsner Health in New Orleans, said she often shows audiences a map of New Orleans that depicts areas of low income housing where people rely on public transportation, where there are increased numbers of multigenerational households with a grandparent as caregiver, and where there is a high density of poverty.

The map, she said, “overlaps with a predominance of Black households.”

If the C.D.C. committee follows the National Academy’s framework, 10 percent of the total amount of vaccine available would be reserved for people in hard-hit communities.

Their report said that because racial and ethnic groups including Black, Hispanic and Native American people are disproportionately affected by the pandemic, “Mitigating these inequities by explicitly addressing the higher burden of COVID-19 experienced by these populations is a moral imperative of any equitable vaccine allocation framework.”

“I see this as a seismic shift,” said Harald Schmidt, an assistant professor of medical ethics and health policy at the University of Pennsylvania. “We can’t go back to colorblind allocation.”

But priorities extend beyond those in hard-hit neighborhoods.

The C.D.C.’s committee suggests a framework that divides the U.S. population into four broad groups for vaccine allocation when supplies are short. A vaccine would be administered in phases.

The first phase offers a vaccine to health care workers, a large group that constitutes at least 15 million people and includes low-wage workers, such as nursing assistants and housekeepers in nursing homes. These groups often overlooked in discussions of health care workers, noted Dr. Grace Lee, a committee member from Stanford University.

“Most people think doctors and nurses, but we rely on a whole team of people to care for patients and to keep our health care systems working,” she said.

The second potential phase is made up of essential workers who are not in health care, a group that includes teachers. It also includes people in homeless shelters and prisons and staff who work there. And it includes those with medical conditions that place them at high risk and people older than 65.

There are an estimated 60 million essential workers who are not in health care — and it will be difficult to decide who among them gets priority without knowing how each vaccine candidate performs, Dr. Lee said.

Subsequent phases include people at lower and lower risk levels until the final phase, which includes everyone not offered vaccines in the previous phases.

But any move to weave justice and equity into the distribution of a coronavirus vaccine raises difficulties.

It’s not even clear that hard-hit communities that are heavily Black would want extra doses of a vaccine reserved for them, said Ellis Monk, a Harvard sociologist who studies race, inequality and health.

“Given the history of the United States medical establishment,” he said, many African-Americans have “a healthy skepticism about potentially being guinea pigs.”

Another is deciding what constitutes a hard-hit area.

In addition to the National Academies framework, the C.D.C. committee was influenced by proposals from experts at Johns Hopkins University and the World Health Organization.

The National Academies framework that the C.D.C. is considering favored an index, the Social Vulnerability Index, to decide which communities are hardest-hit by the virus. It was designed to help allocate federal aid during hurricanes and other disasters.

The index is based on socioeconomic status, household composition, race, ethnicity, language, housing and transportation.

Members of the committee said repeatedly that they want to be sure communities that who score high on the social vulnerability index have access to the vaccine.

But the Social Vulnerability Index is not the only measure being considered, said Dr. Beth Bell, a committee member at the University of Washington in Seattle.

The problem is that different indexes can lead to very different consequences. And any allocation plan that explicitly includes race as a criterion could be subject to legal challenges, Dr. Schmidt and his colleagues wrote recently in the journal JAMA.

An alternate measurement, the Area Deprivation Index, uses social indicators of health, such as crowding, to identify communities where needs are greatest, but does so without factoring in race.

The difference between the two indexes leads to stark differences in allocation, says Dr. Schmidt. When the first two phases of vaccines are distributed, 1.7 million more doses would be offered to mostly worse-off Black and Hispanic communities using the vulnerability index preferred by the National Academies than with the deprivation index, he and other colleagues reported in another paper.

The difference in the numbers of people offered the vaccine, Dr. Schmidt noted, is bigger than the population of Philadelphia.

“Normally, we make up scenarios like this for teaching purposes,” Dr. Schmidt said. “But for better or worse, this is pretty much the real picture.”

In principle, using equity and justice as a factor in vaccine distribution is laudable, said Dr. Michael DeBaun, vice chair for clinical and translational research at Vanderbilt.

But, he said, what if it turns out that a vaccine prioritized for hard-hit areas whose residents are mostly Black turned out to have serious adverse effects? What if those effects might have been predicted had the clinical trials included more people of color?

That impact “would be devastating to the trust in the C.D.C. and public health,” Dr. DeBaun said.

Acceptance among people of color also will depend on the political climate and “who’s in power,” Dr. Monk said. Trump administration officials have repeatedly tried to silence or override career scientists at the C.D.C. and F.D.A., fueling skepticism that vaccines are being rigorously tested, he noted.

Dr. Price-Haywood said that acceptance of a vaccine must be seen in the larger context of many Black people’s distrust of the medical establishment. That also is reflected in a reluctance to participate in clinical trials, with people asking “Is someone experimenting on me?”

“In addition to that, she said, “you have the sense that ‘’everything is being sped up,’” and that “‘you did this too fast.’”

Another potential problem will be the reactions of different states, which will be the ones distributing the vaccines using the C.D.C.’s guidance.

The allocation proposal, “is built on the assumption that people who for generations have been underserved and disadvantaged should get a leg up if we can afford it,” said Dr. Matthew Wynia, an ethicist and infectious disease physician at the University of Colorado. But, he said, leaders in some states may refuse.

“We have a very diverse country with different views on what is fair and in particular what is fair to communities long underserved,” he said.

There are no easy answers, said Dr. Schmidt.

“Getting it super-duper perfect could be an illusionary ideal,” he added. 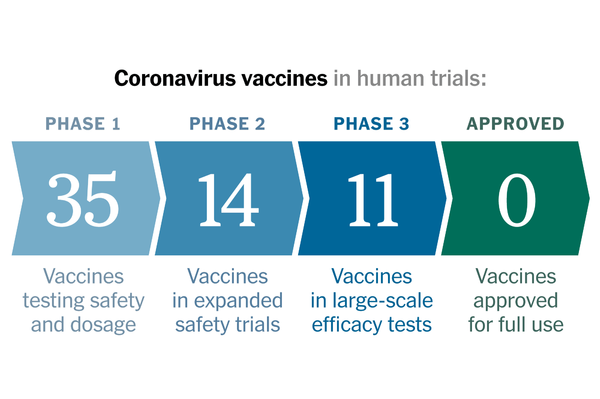