Why the US is NOT a good place to raise a child: Gun violence, sky-high cost of living and lack of paid parental leave make America the 18th choice for bringing up kids behind Canada, Australia and much of Europe

By Natalie Rahhal Acting Us Health Editor For Dailymail.com

The US ranked 18th in this year’s list of the best countries in which to raise a child, falling behind the UK, Canada, Australia and many European nations.

Despite its economic stability, the US scores relatively low for being family friendly and fails to get two out of 10 points for ‘safety’ in the US News & World Report’s 2020 rankings of the best countries, published Wednesday.

Chief among the factors that separate the US from the upper echelon of countries for rearing children – dominated by Scandinavian countries – are American policies that don’t require paid time off for working parents and the nation’s gun violence.

On the upside, the US is seen as having a well-established education system, but without better policies for caregivers, experts worry American kids and families may lose out. 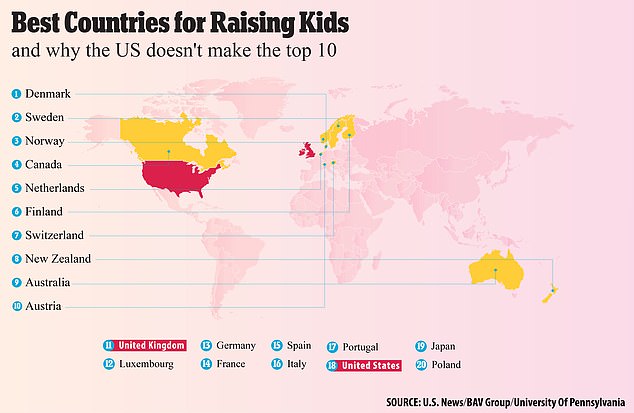 The US (red) barely made the top 20 places to raise children, falling at 18, well below the UK (red, right) and most of Europe, where employees are guaranteed paid parental leave

In US News & World Report’s annual overall rankings – compiled based on international perceptions of countries by the publication, the Wharton School’s marketing department and BAV group – America is the 7th best nation.

It gets nearly full marks (scored out of 10) for categories like entrepreneurship and cultural influence.

But when it comes to the factors that shape day-to-day living, the US falls short.

For matters of ‘citizenship,’ the US gets just a 5.4, comprised of sub-categories like gender equality, distribution of political power and its dismal marks for human rights (4.5), caring about the environment (0.9) and trustworthiness (1.6).

Even closer to home, the US eked out just over half of its possible points for quality of life, and its these factors that deeply affect the development of children.

The monthly cost of living for a four-person family in the US, excluding rent, is around $ 4,045.

Danes get a monthly subsidy of about $ 508 USD for kids under three, and of about $ 307 for those three and over.

Not only does the US government provide no assistance for the cost of childcare, American companies aren’t required to give employees paid time off to care for their children.

‘One of the biggest, gaping holes in [in the US] is the lack of paid parental leave,’ Dr Jody Heymann, a University of California, Los Angeles professor of public health and contributor to the UN’s report on family friendly policies, told DailyMail.com.

‘There are 187 countries with paid maternal leave, and the Us doesn’t have it.

‘Nearly half the world – and it’s nearly universal in wealth countries – has the opportunity for foad leave for dads.

‘This is a crucial gap.’

But in 2018, only 17 percent of Americans in the private sector had access to paid family leave, according to government data.

And Dr Heymann says it takes a toll on more than US families’ bank accounts, affecting the well-being of children too.

‘The first months and several years of life have profound impacts on children’s immediate and long-term health and development and we need to put [protections] in place in the US,’ she said.

THE REST OF THE WORLD SEES THE US AS ‘UNSAFE’ AMID GUN VIOLENCE AND SCHOOL SHOOTINGS.

Notably, the US got just 1.5 points for its perception of safety.

An oft-cited statistic: there were more mass shootings in 2019 than there were days in the year.

In 2019, there were at least 45 school shootings in the US and guns – accidentally or intentionally – are the second leading cause of death for children in the US.

The last school shooting in Denmark was in 2015.

Australia banned guns after a shooting that killed 35 people in 1996 and has had no school shootings since.

Every recent attempt to pass gun legislature in the US has died on the vine, including regulations proposed following the Sandy Hook Elementary School shooting that cost the lives of 20 children under age eight.

The US Constitution guarantees the right to gun ownership – though notably not to health care for adults or children – and some argued last month that an armed security detail at a Texas church saved lives after a gunman opened fire there.

But public health advocates widely slam firearm policies in the US, where a unique culture of violence and school shootings persists.

The perception that the US is not a good place to raise children presents problems for those kids, their families and the future of he nation, says Dr Heymann.

‘We should absolutely be concerned, because it is an incredibly important measure of how our country is doing now and will be doing over the coming decade,’ she says.

‘The extent to which we support the healthy development of all children, which we could do so much better at in the US, will affect the future quality of life of everyone who lives here.

‘For children themselves as they grow into youth and young adults and for everyone who can take part in the economy to be able to rely on our next generation.’

Regardless of the current posture toward attitude, Dr Heymann says that the desirability of the US as a place to live, work and raise a family has ramifications for international confidence in the health of the nation.

‘Do people want to come here to work, to live and to grow the country?’ she asks.

‘Is this where everyone wants to invest their most important human resources?

‘It’s a crucial indicator, but the good news is there are clear ways we can do better.’