When Ms. Mason was living at home during the first six months of the pandemic, she relied on her mother for food shopping and company. In the fall, she returned to an empty Boston apartment where she worked remotely. Taking public transportation to the grocery store and laundromat brought her unexpected stress.

“It was very difficult for me to get used to being alone again,” she said. “I spent a lot of weekends in bed if I didn’t have anything to do. I experienced a lot of loneliness.”

It’s not uncommon for young adults in their 20s to return to their parents’ home, as economic and social situations tend to fluctuate during this life period. But the pandemic changed the rules for many young adults, requiring them to live with their parents for much longer than 20-somethings of earlier generations, said Jeffrey Arnett, a professor of psychology at Clark University. Young adults were more likely than other adults to have lost their jobs because of the coronavirus and to feel depressed in response to the pandemic, he said. For some, it may have felt like a step backward.

“You felt like you were getting somewhere, or at least you were intending to,” Dr Arnett said. “And now here’s a year that just blows it all up — one that made it very hard to make progress toward an adult life for yourself.”

Young adults are discovering that after the second emptying of the nest, it’s not just parents who struggle. The first time they left home, it was exciting to escape high school and parental rules and move in to college dorms or apartments with friends. But young adults leaving the nest a second time during the pandemic often are returning to empty apartments where they must work or attend classes remotely. 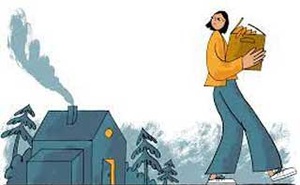 After moving back in with their parents during the pandemic, some young adults are struggling to adjust to life on their own. (Janik Sollner/The New York Times)

Marina Frattaroli, 23, moved home to Dallas for what was supposed to be a brief stay in 2019 after graduating, but the pandemic delayed her move out for a year. While living with her parents, Ms. Frattaroli was unemployed for part of the time, and she grew used to the “slow pace of life,” and spending her free time cooking, grocery shopping and reading. This summer, she’s going to work for a judge in Houston. Since leaving the nest again, it’s been difficult to juggle home life and law school, and she’s still struggling with lingering effects from a bout with Covid-19 two months ago.

The first time she left home, she and her friends had spent years planning for college. This time, she said, she thought leaving home again would be the same. “But that is not at all what it felt like,” she said. “I don’t think I was ready for it, or that the world even knew we had so much to transition from.”

Brynna Bantley, 27, was working as a personal chef in San Diego, but had to return home to Atlanta in July after she couldn’t find consistent work because of pandemic shutdowns. Ms Bantley said she’s been putting off her eventual move out of the house, in part to save money, but also because she’s anxious about leaving home. She worries about being able to support herself without her parents’ help and her ability to find steady freelance work in the hospitality industry. In college, she said, she felt she had “a purpose.” “Now if I move out, I don’t know if I’ll have as much of a directive,” she said. “You don’t know exactly what you’re going to do. It’s a little bit daunting.”

Erica Sandoval, a licensed clinical social worker and president of the New York City Chapter of the National Association of Social Workers, said young adults have always faced challenges when leaving home, but the pandemic has added an additional wrinkle of uncertainty to what their lives will look like going forward. “There are a lot of different emotions due to the fact that you’re really not sure what it’s going to be like,” said Ms. Sandoval. “The world is not the same.”

Having a plan can relieve anxiety. She advises young adults to start with a financial plan that takes into account how much you have saved in the bank, how much money you’ll be earning after leaving home and which bills you’ll be responsible for paying on your own. Set short-term and long-term career goals, and have a Plan B in case you need to adjust during uncertain times. Make a plan for health emergencies, too. “Who is the person who should be called, and how do you plan on checking with each other?” she said.

SET UP A SUPPORT SQUAD.

Young adults leaving family support systems behind should be proactive about setting up a support squad in their new city, particularly if they are struggling with mental health. The support team should include any friends, family and a therapist in the area. A pet can also be a great comfort, said Ms. Sandoval.

Try to build new relationships to add to the support squad, said Danielle Burks, a licensed clinical professional counsellor specialising in teens and young adults based in Chicago. Ms Burks suggests chatting with neighbours, looking for community events and heading to the local bookstore to meet new people. Apps like Bumble BFF and Meetup can help foster new relationships.

“Moving to a new place during this time, it can feel scary and lonely,” she said. “Maintaining current relationships, leaning in on those relationships is important.”

Julie Lythcott-Haims, a former dean of freshmen at Stanford University and author of the book, “Your Turn: How to Be an Adult,” said an easy way for young adults to create a routine in their new home is to think about three categories: bodies, bills and belongings. Schedule time in the mornings for self-care activities like exercise (bodies) and make room for household chores (bills and belongings) in the evenings. She also recommends the YouTube account “Dad, how do I?” which offers videos with tips on how to take care of many of these adult responsibilities, from changing a toilet seat to mowing the lawn.

Asking for help is also a key part of “adulting,” Ms Lythcott-Haims said. She said young adults should think of asking for help as an opportunity to learn and grow. She suggests adults first think through possible solutions to a problem on their own and then seek advice from parents or a mentor.

“Adulting means being more or less responsible for yourself,” she said. “But you aren’t meant to go it alone.”

FOCUS ON YOUR ACCOMPLISHMENTS.

Young adults can build confidence by reflecting on the fact that they got through the past year. Single out specific goals you accomplished during the pandemic — from completing a college course to simply surviving a difficult life period. “Try to offer yourself that reminder of what you did manage to do despite this tough time, because that memory, and doing the work of recalling it to memory, will help build that emotional resilience that will support you the next time something difficult happens,” said Ms Lythcott-Haims.

For some young adults, becoming closer with their parents was a meaningful pandemic accomplishment.

“If you asked me two or three years ago if I would ever move back in with my mom, I would have said, ‘There’s no way,’” said Coltrane Siegel, 28, who moved home to Northampton, Mass., during the pandemic, and recently moved back out again to live with their partner. Moving out has been an adjustment, but the change has created a new appreciation for the relationship.

“I do feel really grateful to have spent the past year living with my mom,” they said. “When I think back to some of the most memorable parts of the year, many of them were cool adventures we went on together, new foods we tried to cook and so many laughs.”