Whole Foods CEO claims he hardly drinks water, packs a rice cooker to make steel cut oats on the road – and only cheats on his strict vegan diet to drink beer

Whole Foods CEO John Mackey sticks to a strict diet of organic vegan meals hardly drinks any water and will not touch a dessert or snack.

The 65-year-old co-founder and head of the organic grocery giant told CNBC he grew up eating instant meals – and won’t touch the stuff now.

In fact, Mackey is so stringent about his eating habits that he claims to pack a rice cooker so that he make is his morning oats when he travels.

But some of his healthy eating choices buck traditional nutritionists’ advice – like Mackey’s insistence that he gets enough water from fruits and vegetables to largely skip drinking it on its own. 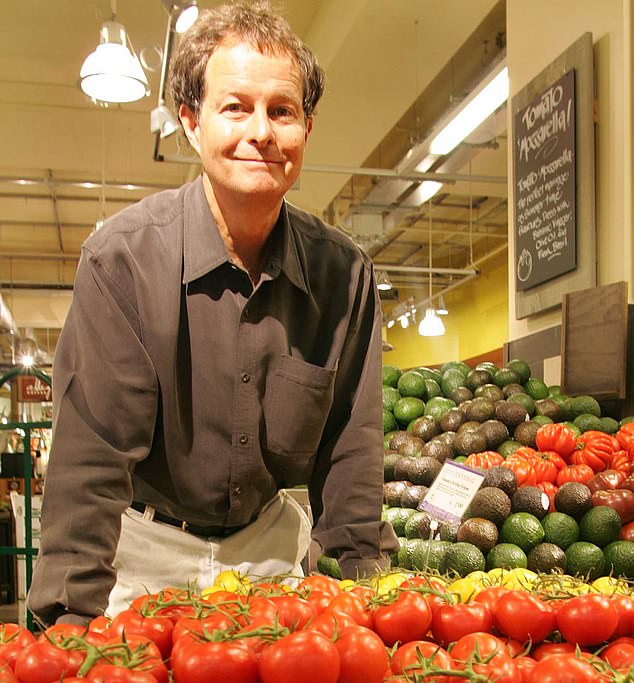 John Mackey, the 65-year-old CEO of Whole Foods says that he eats only three organic, vegan meals a day, never cheats on his strict diet regimen, and gets almost all the water he needs from fresh fruits and vegetables.

‘A plant-based diet is pretty high in water,’ Mackey told CNBC’s Make It.

‘So, the actual truth is I don’t need to drink water most of the time.’

The classic rule of thumb for hydration is ‘8×8’ – eight glasses containing eight ounces of water – a day, but everyone’s needs vary based on their size, metabolism and activities.

Mackey says he squeezes his hydration out of the 15 servings of fresh fruit and vegetables he estimates he eats over the course of the day.

These are spread out over three daily meals: breakfast around 6 am, lunch around 11 am, and dinner, co-cooked by him and his wife, Deborah, after leaving the office at 7 pm.

Breakfast is always either steel cut oats or a smoothie made with in-season fruits raw cacao, flax seeds, raw cacao or walnuts – to get his first dose of omega-3 – and some fiber-rich greens, like kale, collard greens or spinach.

The oats are mostly reserved for travel days when he cooks them in the rice cooker he boasts to lug with him on trips.

His 11 am lunchtime is strategic.

Whole Foods’ headquarters in Austin has a buffet straight out of the chain’s stores, and Mackey doesn’t want to wait too long in line to pile veggies together to make a large salad for lunch.

Whether or not his strict diet encourages Mackey’s health, it’s certainly good for his wallet.

Even when travelling, CNBC reported that the frugal Mackey tries to stay at hotels near Whole Foods so he knows his preferred lunch will be available – at no cost.

But even Whole Foods’ dressings aren’t quite perfect for his strict rules and discerning tastes.

Mackey, author of the The Whole Foods Diet, keeps homemade dressing in his office fridge.

Mackey refuses to eat frozen or processed meals, and sticks to the organic produce his multi-billion-dollar chain is known for.

‘We’ll chop up a bunch of different veggies and throw it in the steamer,’ he says of the dinner preparation routine he shares with his wife.

‘And then we’ll have some kind of lentil or beans with it and a nut sauce.’

Mackey’s habits are for his health – but he hasn’t always eaten so clean.

Raising him in the 1950s and 1960s in Texas – a state known for barbecue, big servings and being the tenth-most obese in the nation – his mother took a very different approach to meals.

‘My mother was very taken by processed foods,’ Mackey said.

‘[She] could fix dinner quickly.’

Studies have shown that processed foods are high in bad cholesterol and fats and actually cause people to overeat.

Mackey is having none of it.

Even his sleep hygiene is unflappable. The CEO puts his phone into ‘do not disturb’ mode at 9 pm, unplugging from work altogether, until he starts his regimen again at 5 am for meditation, spiritual reading and affirmations.

But even Mackey has his vices: he admits to the very occasional beer or alcoholic drink, and Medjool date dessert.