The US special presidential envoy for climate met Prime Minister Sheikh Hasina on Friday to officially invite her to the Leaders’ Summit on Climate called by Biden.

Prior to his meeting with Hasina, the US special envoy met Foreign Minister AK Abdul at the state guesthouse Padma in the afternoon, which was followed by a joint news briefing.

“We are excited in the United States about the prospect of moving to this cleaner energy, this new future that protects our world for our children, grandchildren and future generation as we live up to our global responsibility to lead and do what young people around the world are asking us to do – which is to behave like adults and get the job done,” Kerry said at the briefing.

Conveying Biden’s greetings on Bangladesh’s 50th anniversary, Kerry noted that he had visited the country as secretary of state.

He also mentioned that the US has returned under Biden’s leadership to the Paris Agreement. “Paris was the beginning. We always knew we were gonna have to measure where we were,” he said.

Kerry regretted that the previous president, Donald Trump, pulled out of the Paris Agreement. “But while he did that, governors and mayors stayed in that agreement. And we have continued to work,” he said.

“And now that we have President Biden back who is deeply committed to his decision, I believe we can make unparalleled progress on a global basis,” he added.

The day after taking office, Biden brought the US back to the Paris Agreement, which Donald Trump withdrew from four years ago.

Subsequently, Kerry, who signed the Paris Agreement on behalf of the US in 2015, was given a new role as special climate envoy to Biden.

“No one country can solve the problem of the climate crisis and no country doubts there is a crisis,” the special envoy remarked.

“Migration is already happening because of climate change. So we know from the scientists that we all must take action,” he said.

Kerry said the US dealt with the challenge of helping to bring technology to the places that don’t have it but need it.

“Equally importantly we are delighted that we have the ability to work together now and tensely going forward in order to bring technology, research, development, finance to the table to do what we know we must do,” he said.

Before Bangladesh, Kerry visited the United Arab Emirates and India. Both countries have pledged to raise ambition in tackling the effects of climate change and try to do more to address this crisis, he said. 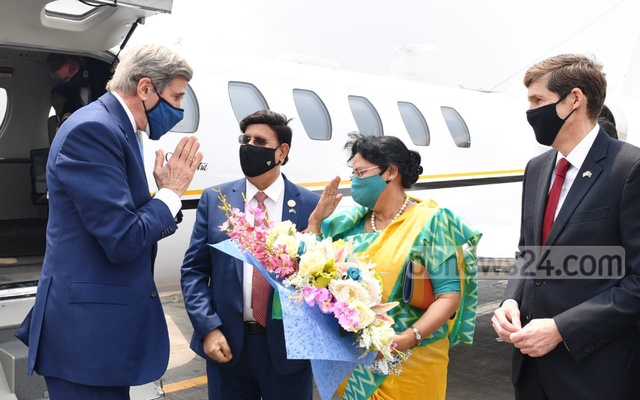 Foreign Minister AK Abdul Momen and his wife Selina Momen receive US Special Presidential Envoy for Climate John Kerry in Dhaka on Friday, Apr 9, 2021. US Ambassador Earl Miller joins them at the airport.

They also agreed to work in partnership “with us to accelerate the transition between the energy future”, according to him.

“With the ability to create tens of millions of jobs, in the deployment of these technologies in the creation of this new energy future,” he said.

President Biden understands this and so he has put $ 2 trillion on a growth plan in front of the US which will have the country go to zero carbon in its power sector by 2035 and deploy 500,000 electric vehicle charging stations, Kerry said.

Kerry’s visit is significant for Bangladesh because Biden’s call for a global conference for climate change comes at a time when Bangladesh leads the Climate Vulnerable Forum or CVF, the forum for countries at risk in the change.

The foreign ministry said Momen sought from Kerry US support for increasing global climate ambition and commitment to accelerate implementation of the Paris Agreement, hoping that under the leadership of the US, the developed countries would come forward with ambitious actions to limit the global warming at 1.5 degrees Celsius.

While discussing about the upcoming COP26 in Glasgow in November this year, the foreign minister reiterated the significance of the promised international financial flow at and beyond $ 100 billion annually to support sustainable development and energy transformations of the developing economies.

He stressed that the funding should be distributed at 50:50 ratio between mitigation and adaptation.