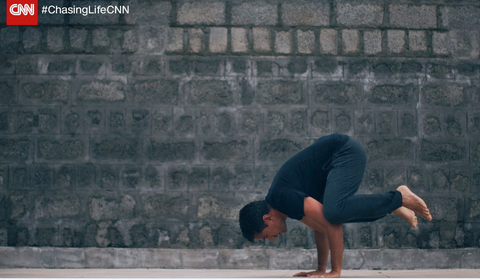 The show — which is available on the streaming platform CNNgo — was produced by the same division that created Anthony Bourdain Parts Unknown, and it was clearly designed to capitalize on that profitable model of personality-driven TV.

While Bourdain promoted the idea that Americans can learn from culinary traditions of other countries, Gupta’s premise is that we can learn from their health care lore.

At the start of each episode, Gupta tells viewers: “I want the same thing you do: the secret to living longer, healthier and happier.”

As entertainment, it works. Following Bourdain’s formula, the series is filled with charming people, thrilling scenery, and eye-popping cultural rituals.

We see Gupta immersing himself in a scorching Japanese bath, getting a foot-pressure massage in India, milking goats in Italy, taking a high-altitude run in Bolivia, and on and on.

Gupta — once named among People magazine’s “Sexiest Men Alive” — also gets plenty of chances to take his shirt off.

But does this travel documentary do a good job of conveying health care information?

Despite the resources that went into this programming, viewers learn little about what evidence exists that the practices depicted are effective or safe.

In Norway we see Gupta slug down cod liver oil, which he calls that country’s “secret weapon” against seasonal affective disorder — depression that hits in the months when it’s totally dark. No mention of whether there’s evidence this stuff actually improves symptoms. (A 2015 review concluded there’s no high-quality evidence that fish oils help with depression.)

In Turkey, people with mental disorders such as Down syndrome and autism are shown engaging in an Islamic whirling dervish meditation dance. Gupta says we don’t know why this ritual “works” for these people. But does it really? What’s the evidence? We aren’t told.

After watching some of the show’s clips, Canadian cardiologist Christopher Labos, MD, who has a degree in epidemiology and biostatistics and was a member of HeathNewsReview.org’s review team, provided this reaction:

A lot of these segments are very interesting, but they aren’t science-based. … I would have liked to see him actually explore this stuff, hold up the stuff that does work and disprove that stuff that doesn’t. … The truth is, there is no secret to “living longer, healthier and happier.” We already know what we have to do: quit smoking, eat more fruits and vegetables, eat less junk food, exercise more, maintain a healthy body weight. … But re-inforcing these fundamentals probably wouldn’t make for a very entertaining TV show.

What producers apparently thought did make for good TV was playing up purported benefits without telling viewers about potential harms.

Savoring goat cheese in Italy, Gupta asserts that “eating foods that are more alive — like raw cheese — is not only going to help your digestion but also help the rest of your health.” What he doesn’t say is that the CDC calls unpasteurized milk products “one of the riskiest” things you can consume, due to the potential for foodborne illness.

In the same episode Gupta says studies show wine is “good for our health,” and drinking one or two glasses a day is “a pretty enjoyable way to fight disease.”

Labos called this “really glossing over the evidence.”

The idea that red wine is good for the heart is really not supported by good evidence, and in fact, the sugar found in alcoholic beverages will almost certainly make you gain weight, alcohol itself increases your risk of cancer, and the idea that there are healthy antioxidants in red wine has been studied in studies like InCHIANTI, which turned out negative. Drinking alcohol is probably a net negative for your health, but I didn’t get that sense of nuance from the clips.

In the episode on Bolivia, the show suggests that parasitic infections contribute to very low rates of heart disease in the remote Tsimane tribe. CNN tweeted: 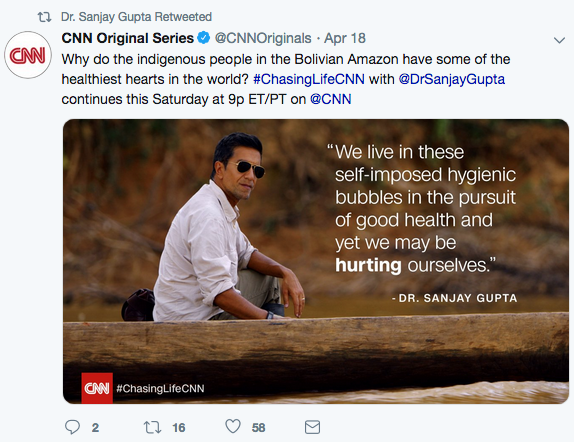 Labos said he had “a few issues” with promoting idea that parasitic infections might actually be good for us:

1.  Most of the low rates of heart disease claimed for the tribe can likely be explained by their healthy diet and high levels of physical activity. In fact that would probably explain lots of it. If they started eating junk food and sitting around all day, their rates of heart disease would almost certainly go up. I don’t think the parasites would do much good then.

2. There’s a popular logical inconsistency in this segment. The tribe actually has a lower life expectancy than the U.S. So they die earlier. Given that the most important risk factor for heart disease is age, an older population (like the U.S. population) will have higher rates of heart disease simply by definition. The basic point is that if you die young, you won’t live long enough to have a heart attack.

3. As for parasites being good for your heart, I think Chagas’ disease [a common parasitic infection of the heart] proves that that is not true. Parasites can actually be very dangerous for your heart.

Lack of skepticism for yoga, ayurveda

At times the lack of skepticism is glaring. In India Gupta nods agreeably as Prime Minister Narendra Modi offers a defense of his government’s promotion of the Hindu practices of yoga and ayurveda, a health system based on herbs and minerals.

Gupta doesn’t appear to raise an eyebrow when Modi asserts that yoga can bring health care spending to zero and rejects the need for objective evidence of a benefit. Viewers aren’t told how Modi’s embrace of yoga and ayurveda is intertwined with the oppression of India’s minority Muslim population and that a key Modi political backer runs a massive ayurveda business.

Buried in a story that ran online, Gupta reported there’s “hardly any” scientific evidence to back up ayurveda, and “much of the impact may just come from the thought that goes into creating your meals” along with fewer calories being consumed and a lack of processed foods and added sugars.

Such nuances barely come across on the TV show.

Appeals to tradition and nature

Appealing to tradition — the reasoning that something must work because it’s been done for generations — pops up a lot. With the foot-pressure massage: “They’ve been around so long, there’s got to be something to it.” With the traditional Japanese diet: “There’s are reason why foods like bitter melon have been preserved and passed down for generations in Japan. They intuitively knew these foods were good for you.”

Likewise an appeal to nature — that something must be healthy because it is natural — is a common refrain.

Timothy Caulfield, a professor of health law and policy at the University of Alberta, produced a six-part medical myth-busting documentary series on Netflix, “A User’s Guide to Cheating Death.”

Caulfield said the show skirts the complexity of evidence.

While the show doesn’t come out with strong endorsements of the many alternative practices they explore, there is this vague support for the embrace of science-free perspectives. We see Gupta asking if “organic” goats’ milk is “chemical free” (What, Dr. Gupta, do you think milk is made of?) and supporting “hope rooted in ancient tradition.”

Caulfield said pop culture is already inundated with what he calls “wellness woo.”

In this era of misinformation, Gupta should have used this space to embrace and encourage critical thinking. Instead we got a show the kind of does the opposite, inviting the viewer to ignore the science and embrace the experience. That kind of thinking — which props up the value of testimonials and anecdote – is exactly what has allowed anti-vaxx sentiments to thrive, bogus diet fads to take root and the science-free concept of “wellness” to grow into a multi-trillion dollar industry.

You’ve probably seen CNN’s “Facts First” ad campaign, which uses the metaphor of an apple to underscore the network’s commitment to bringing viewers fact-filled political reporting. “There is no alternative to a fact,” its copy says.

Caulfield wonders why CNN doesn’t apply the same ethos to health care as it does to political news.

Why not explore what the science actually says and present a full and frank analysis of that evidence — explain how and why the evidence gets twisted and what viewers can do to navigate through the noise? Instead, the show seems to be asking viewers to do the opposite. Ignore the science. Follow your gut and intuitions. In the political space CNN has argued this approach is highly problematic. But it is OK when it comes to science and health?

The hitch is, gathering facts and exploring evidence requires journalists who are skilled in covering health care. Unfortunately, CNN now has far fewer of them after announcing a “restructure” last week that “ultimately impacts 6-7 employees” in its health unit. Gupta still has his job.

Why CNN didn’t skip the nutty globe hopping and save a job or two is anyone’s guess.