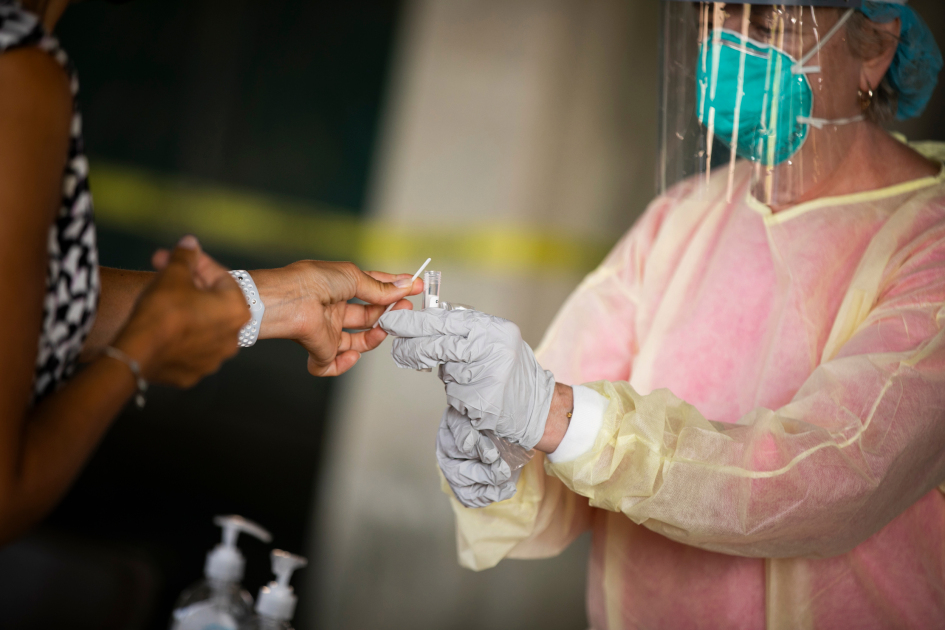 Scientists have created candidate vaccines, which eventually could protect billions of people from COVID-19, with astonishing speed, compressing scientific efforts that usually take years into months. But the leader of a key drug trial said Tuesday that the blistering research pace has nonetheless been too slow to catch the coronavirus.

“We are now five months into it, and a large-scale phase 3 trial launched yesterday, which is remarkable,” said Lindsey Baden, associate professor of medicine at Harvard Medical School (HMS). He also is a principal investigator of the first U.S. vaccine to enter such trials, some of which will happen at Harvard-affiliated Brigham and Women’s Hospital. “It is fast, but we need to be as fast as this virus is. … With four million infections, 150,000 deaths in this country alone, we have to move faster.”

Baden is a principal investigator for the Brigham’s trial of a messenger RNA-based vaccine, whose promising early results in 45 volunteers prompted federal officials to approve it for large-scale trials. The trials of the vaccine from Moderna Inc. and the National Institute of Allergy and Infectious Diseases will involve 30,000 people at 89 locations around the country. Early results showed that the vaccine was well-tolerated by subjects receiving it — though there were passing side effects such as chills, headaches, and injection-site pain — and it induced an immune response in volunteers.

The new trial will test that immune response on many more healthy subjects, seeing whether the vaccine protects from infection, and, as secondary goals, lessens severity of illness and reduces chances of death. The study will also probe the duration of any protection the vaccine provides.

Baden and others involved in developing and testing other vaccine candidates said getting one approved for wide use is unlikely before early next year. Dan Barouch, the William Bosworth Castle Professor of Medicine and professor of immunology at HMS and Beth Israel Deaconess Medical Center, said a candidate vaccine could be ready for emergency authorization by late fall, but only if everything goes as well as possible between now and then. Barouch’s adenovirus-based vaccine is being developed and tested in conjunction with Johnson & Johnson.

Trials of other promising vaccines are underway at the University of Oxford and in China.

Baden and Barouch spoke at an online public briefing on vaccine progress by the Massachusetts Consortium on Pathogen Readiness, or MassCPR, an HMS-led, multi-institution collaboration aimed at better understanding the SARS-CoV-2 virus and developing treatments and vaccines to protect against COVID-19.

The briefing included a discussion of how the human immune response works, of the challenges faced by high-risk communities, and of three major vaccine development efforts, along with a Q&A session.

HMS Dean George Daley, who hosted the briefing, said the rapid development of several vaccine candidates — a process that typically takes three to nine years — was made possible by “countless unglamorous hours in the lab” over earlier years and was evidence of the importance of supporting basic research. Despite the speed at which progress has been made toward a COVID-19 vaccine, he pointed out that globally in just seven months, some 15 million people have been infected and 600,000 have died.

“As the pandemic has caused grave human suffering, scientists have been working tirelessly to crack the biology and the behavior of the virus and develop treatments and vaccines,” Daley said. “They’ve done so with unprecedented speed and a true spirit of international cooperation and collaboration.”

Bisola Ojikutu, assistant professor of medicine and of global health and social medicine at HMS, said trials should include significant numbers of members of minority groups and, whenever a vaccine is ready, distribution efforts should ensure that the communities most at risk aren’t in the background. Ojikutu said that hospitalizations, a measure of severe COVID-19, are 4.6 times higher among Latinx Americans than among whites, while those among Blacks and Indigenous people are 4.7 times and 5.3 times higher, respectively.

Ojikutu said that efforts to tend to high-risk communities have hurdles to clear that include historical incidents of abuse, such as the Tuskegee syphilis study, in which 600 Black men with latent disease were observed without informed consent and never offered treatment when the disease became active. Other concerns include a vaccine’s safety, cost, and side effects.

Ojikutu said a lack of trust is reflected in a recent Associated Press study that asked respondents whether they would agree to get a COVID vaccine. While 56 percent of white respondents said yes, only 37 percent of Latinx respondents did, and just 25 percent of Blacks. Ojikutu said experts are looking to successful public health campaigns for other conditions, such as the HIV Vaccine Trials Network, which increased minority participation in trials from 17 percent between 1988 and 2002 to 33 percent between 2002 and 2016.

Strategies for recruiting minorities into trials include first acknowledging there is a trust problem, Ojikutu said, but also actively engaging the community, partnering with community health centers, holding virtual town halls and other informational outreach, and increasing the diversity of those working on the effort.

The experts also discussed Barouch’s adenovirus vaccine, which uses an altered cold virus to present the immune system with SARS-CoV-2’s characteristic spike protein and generate an immune response. They also discussed another effort, supported by the Gates Foundation, that seeks to generate an immune response using a protein from part of the spike. That protein-based vaccine, according to Nicole Frahm of the Bill & Melinda Gates Medical Research Institute, would be cheaper to produce and distribute and so better able to reach disadvantaged countries and populations.

Though much has been learned in the months since SARS-CoV-2 exploded globally, many important questions remain, participants said. One key question is how durable immunity is. Barouch said that trials in nonhuman primates showed that the immune response can be both robust and lasting, but evidence also has emerged in humans to cast doubt onto how lasting the immunity gained from infection will be. Questions remain about how long any immunity received from a vaccine will last, which is something the trials, coupled with the passage of time, should illuminate.

“We believe that vaccines should proceed in parallel, since it is not yet clear which vaccine will be most protective and most deployable,” Barouch said. “There are 7 billion people in this world. Therefore we need multiple vaccines to be successful.”