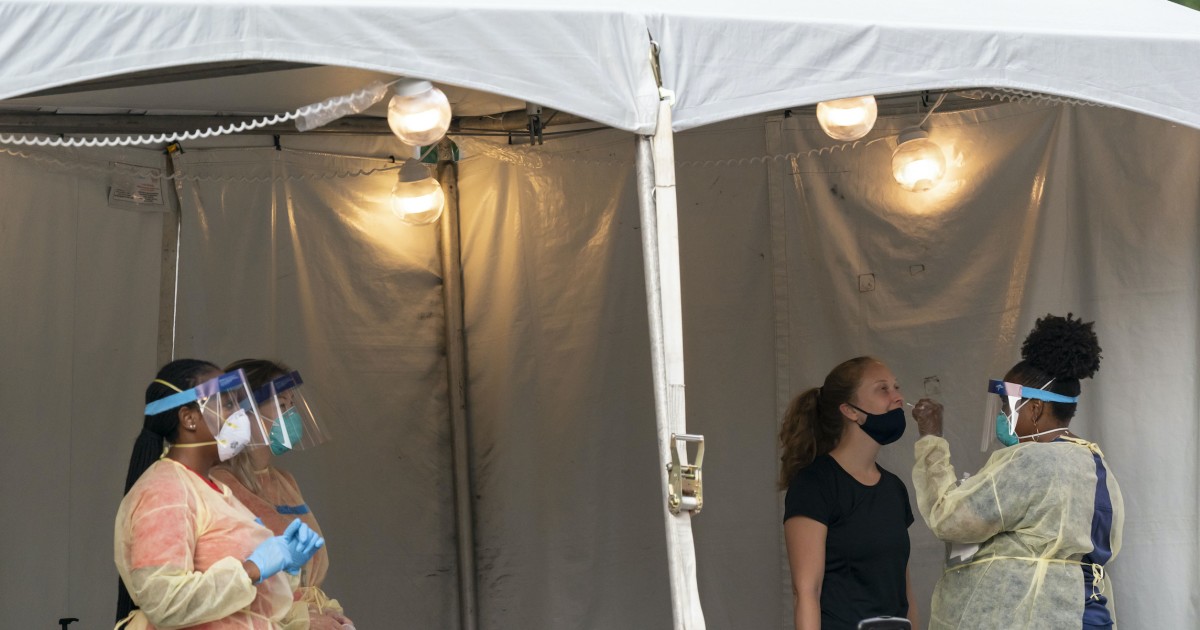 The Trump administration fought back against accusations that it pressured the Centers for Disease Control and Prevention to revise its recommendations in order to limit access to coronavirus tests.

“Let me tell you right up front that the new guidelines are a CDC action,” said Adm. Brett Giroir, the Trump administration’s testing coordinator, Wednesday. “As always, guidelines received appropriate attention, consultation, and input from task force experts, and I mean the medical and scientific experts.”

The CDC changed its testing guidelines Monday to say that asymptomatic people “do not necessarily need a test” even if they were exposed. The new recommendations are a reversal from previous CDC guidelines, which said asymptomatic people should be tested so as to limit transmission to vulnerable populations.

Giroir said the intention was to do more “appropriate testing, not less testing.” He also said that the new guidance “cannot be interpreted that we are inhibiting local public health.”

The CDC also dropped its recommendation that people returning from overseas or out-of-state travel quarantine for 14 days. Yet the CDC’s website still states that if a traveler was exposed to the virus, that person poses a risk to others for 14 days after exposure. It also advises people to “follow state, territorial, tribal and local recommendations or requirements after travel.”

A federal health official told CNN that high-ranking members of the Trump administration pressured the agency to make the changes.

“It’s coming from the top down,” the official said.

President Trump has argued that less testing would mean fewer cases and has said that he told administration officials to do less testing.

The changes received a tough rebuke from House Speaker Nancy Pelosi. “The CDC guidelines that they put forth are scary and dangerous,” the California Democrat said.

“I was under general anesthesia in the operating room and was not part of any discussion or deliberation regarding the new testing recommendations,” Fauci told CNN Wednesday.

“I am concerned about the interpretation of these recommendations and worried it will give people the incorrect assumption that asymptomatic spread is not of great concern. In fact, it is,” he added.

Dr. Wesley Farr, a physician specializing in infectious diseases and a lecturer for the University of West Florida’s Department of Public Health, said Giroir’s explanation of the changes made sense.

“My first impression, based on the news reports, was that I was surprised they would recommend not testing,” Farr said. “But as I read the CDC’s guidelines on its website, I think I understand it.”

Farr said that there are two rationales for the testing change. The first is resource management. People who have COVID-19 but are asymptomatic are more likely to have a negative result on a test. More such tests burden the laboratories that are processing them. In many areas of the country, labs have a two-week backlog.

Research has found that people who are asymptomatic can still spread the virus. A negative test, though, can cause people who have been exposed to be much less cautious than they should be. That is the second reason for the change, Farr said.

“We don’t want to give exposed, infected people false assurance that they are not able to spread it,” he said. “It is important to maintain that 14-day self-quarantine if there has been a significant exposure.”

Other outside experts have argued that mass-testing people, regardless of whether they have symptoms of COVID-19 or exposure to known carriers, would allow for a faster return to normal life. The Trump administration has rejected that strategy.

“It is inherently self-contradictory. It is the exact opposite of what the CDC has been saying,” Cuomo said during a Wednesday call with reporters. “So either the CDC is … admitting error in their first position or this is just political dictation.”

New Jersey Gov. Phil Murphy announced Wednesday that he will permit gyms to reopen at 25% capacity on Sept. 1. Exercise class sizes will be scaled down to maintain distance between participants and all members and staff must wear masks at all times.

“Gyms are among the most challenging indoor environments to prevent [COVID-19] transmission,” Murphy said. “But, given where we are in this fight, we believe we are ready to take the next step forward.”

Coronavirus deaths jumped 1,213 Tuesday, pushing the total number of fatalities due to COVID-19 to about 179,200.

More than 5.8 million cases have been confirmed in the United States. The number of new cases reported is still high, with a seven-day average of about 42,000.

“We’ve got four executive actions that actually the president took,” Meadows said. “We’re going to take a few others because if Congress is not going to work, this president is going to get to work and solve some problems. So, hopefully, we can help out the airlines and keep some of those employees from being furloughed.”