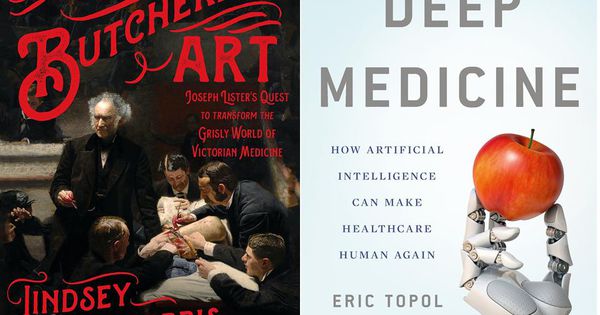 The small tower of books on my nightstand grew taller last month after I asked recipients of my monthly newsletter for summer-reading suggestions. As the recommendations poured in, two works of medical nonfiction stood out.

Judging by their covers, these books appear to take place in different worlds – one set amid the backdrop of a dingy 19th-century operating theater and, the other, situated in some utopic future where man and machine coexist in medical harmony. Reading them back to back, however, reveals a shocking truth: Today’s medical practice bears a striking resemblance to the world of medicine two centuries ago.

I began with Eric Topol’s new release, recommended to me by more than a dozen readers. For the preface to his third book on medicine’s digital revolution, Eric made an interesting choice. He selected Dr. Abraham Verghese, the physician and bestselling author who has described, nostalgically, the “The Doctor,” an iconic 19th-century painting that depicts a physician sitting watch over a patient with visible empathy. With his deep interest in bedside medicine, Abraham’s voice might seem a cacophonic addition to a book about the future of AI in healthcare. On the contrary, Abraham brought harmony to Eric’s message.

Eric, a cardiologist and molecular medicine professor, is nothing like the hundreds of AI-hype mongers I encounter at most med-tech conferences. For nearly a decade now, I’ve listened to promoters and proponents of machine learning say the AI revolution is only a year away. And then, twelve months later, healthcare delivery looks markedly similar to the year before.

Eric’s take is more modest. He’s careful not to over-promise on the potential impact of healthcare IT. More important, he’s as concerned about medicine’s humanity as he is about its technology. As a guest on season one of the Fixing Healthcare podcast, Eric told me, “The United States is the only country that does not provide healthcare to all of its citizens. That needs to be fixed.”

He said this first, before addressing any of the various applications that might someday come to define healthcare’s high-tech future.

His writing, like his research, spares no detail. Deep Medicine overflows with examples of AI pilot programs meant to relieve doctors of burdensome and monotonous tasks, thus freeing them to spend more time with patients. Although he and I are both bullish on the future of healthcare technology, we differ on one key point. Eric believes AI will assist, but not replace, clinicians. I respectfully disagree.

Artificial intelligence tools are already more accurate than physicians when it comes to visual tasks like reading radiographs and pathology slides, and they’ll only improve from here. In the future, computers will be able to quickly and precisely read thousands of images in minutes at no added cost, making it extremely likely that AI will replace many humans currently working in radiology, pathology and even dermatology. I agree with Eric that there will be a need for doctor oversight and a bit of “human touch” in these fields, but not much.

It wouldn’t make sense or cents. For example, before robotic options came along, measuring components of human blood used to be an arduous task, requiring a veritable army of technicians and clinicians. Now a single doctor stands watch over a bank of machines that can test and report the results of thousands of samples with far greater accuracy, in a fraction of the time and at a dramatically lower cost. As AI technologies become more sophisticated, I can’t see why other areas of diagnostic precision will fare differently.

As Eric rightly points out, the scientific advances of modern medicine have been breathtaking. But as I picked up the second book on my recommended reading list, I was both surprised and disturbed by how many of the problems in medicine today mirror the failings of yesteryear.

My Fixing Healthcare co-host, Jeremy Corr, recommended The Butchering Art by Lindsey Fitzharris, who will join our podcast in June.

Lindsey is a well-versed medical historian who earned her doctorate from the University of Oxford. In her debut book, she takes us back to the fabled Victorian era where she paints an unexpected picture—not of lords or ladies or gentlemanly physicians, but of medicine’s gruesome past. There, in 19th-century England, our protagonist Joseph Lister is struggling to prevent grisly post-operative deaths from infection.

In an opening narrative, Lindsey describes Lister observing the miracle of ether, the first effective anesthetic introduced into modern practice. The before and after visuals are striking: Limb amputation, which once resembled a scene out of a modern horror movie, became painless and seemingly safe. But alas, rather than saving more lives, ether sent mortality rates skyrocketing. Though doctors could effectively numb the patient, no one had yet discovered the cause of infection, nor would they begin to embrace Lister’s tenets of antisepsis and hygiene until much later in his life. Instead, doctors of the era had a phrase, “laudable pus,” meant to suggest that infection was an inevitable part of the surgical healing process.

Lindsey is a powerful writer, detailing with precision the squalid conditions of London’s one-room dwellings, packed with people, adjacent to streets overflowing with human waste. She tells of doctors walking from the morgue to the delivery room, proud that their unwashed coats were stiffened by blood and bodily fluids.

I couldn’t put the book down. Despite knowing all along that it was bacteria causing so much death and despair, I kept reading with eager anticipation, waiting for Lister to make his scientific discovery and for history to prove his detractors wrong.

Viewed from a distance, medicine today is light years ahead of where Lindsey’s story leaves us. In Lister’s time, a hospital admission was a near-certain death sentence. Today, hospitals are the sites of modern miracles, where doctors cure cancer and reverse the ravages of heart attacks and strokes. Nevertheless, as I finished these two books, I was left with the nagging sensation that medical history continues to repeat itself in more ways that we care to admit. Here are three examples:

Two Centuries From Now, How Will Historians Look Back On Today’s Medicine?

These two provocative hardcovers raise important questions about the future of medicine and how coming generations might view healthcare’s current era. Will advances in health-IT and genomics someday make today’s medical practice seem as arcane and barbaric as those portrayed in The Butchering Art?

Will historians look back incredulously at our use of knives and chemical poisons to treat heart disease and cancer? Will they laugh at the thought of people leaving their jobs and homes to visit the doctor’s office for problems that could be solved through video visits? Will they scoff at America’s continued obsession with medical intervention and our reluctance to embrace preventive medicine? Will deep learning ultimately save healthcare or will doctors revolt against future technological advancements?

Both Deep Medicine and The Butchering Art are books about those on the leading edge of science trying to push forward a stubborn medical culture, which resists change and remains unwilling to address its faults. If the past indicates the future, I worry doctors will remain as slow to adapt in the future as they were in the past.