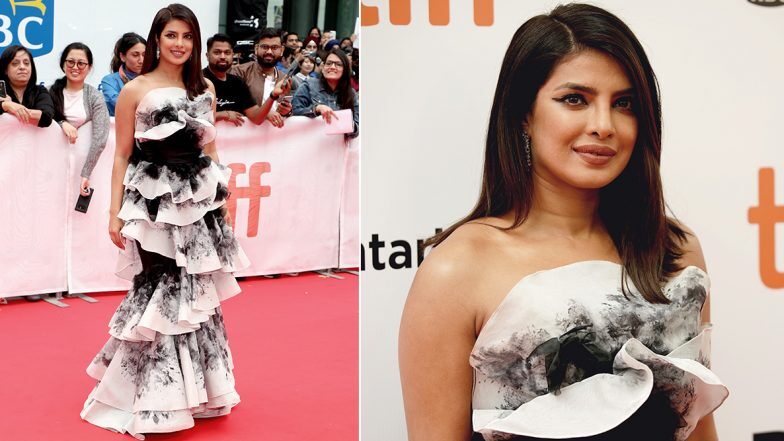 Global icon Priyanka Chopra Jonas rules when it comes to fashion. She has once again made heads turn at the red carpet of the Toronto International Film Festival (TIFF) 2019. Priyanka walked the red carpet of the prestigious film festival in a Marchesa Fall 2019 black-and-white frilled gown for the premier of The Sky Is Pink. She walked the red carpet alongwith her co-star Farhan Akhtar and director Shonali Bose. They were accompanied by Farhan’s girlfriend, Shibani Dandekar. Priyanka Chopra-Farhan Akhtar’s The Sky Is Pink Gets A Standing Ovation At TIFF 2019 – Watch Video.

Priyanka Chopra Jonas was an absolute stunner at TIFF 2019. Her look was simple yet chic. She looked gorgeous in those layered frilled dress, kept her hairstyle simple, minimal makeup and accessories. Farhan Akhtar looked dapper in a suit whereas Shonali Bose wore a bright pink coloured saree. Take a look at the pictures from TIFF 2019 red carpet.

Earlier Priyanka Chopra Jonas took to Instagram and shared a picture captioning it as, “Tonight at Roy Thompson Hall in Toronto we introduce #theskyispink to the world at @tiff_net. What an exhilarating moment…I could not be more proud of this film. Are we going to see you tonight??!! ? @shonalibose_ @faroutakhtar @rohitsaraf10”. Rohit Saraf and Zaira Wasim are playing the role of Priyanka and Farhan’s children in The Sky Is Pink.

Ahead of the premiere Priyanka Chopra Jonas told AFP, “People get surprised when they see The Sky is Pink and they’re like, ‘this is not a Bollywood movie.’ Bollywood is not a genre!” She also said, “It really is my quest to educate people in that.” The Sky Is Pink is slated to hit the screens on October 11, 2019.