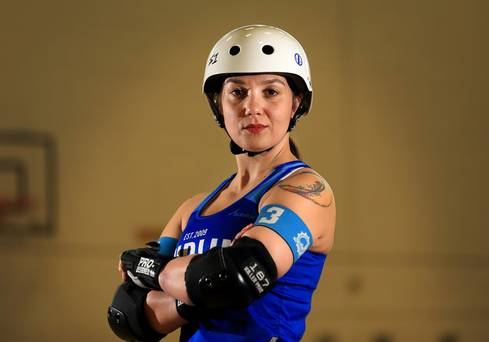 If you look a little harder, you might find that there’s a more unusual activity out there that might be just the thing to keep you fit while having fun at the same time. We chatted to some trailblazing women who’ve found their niche in some truly unusual activities…

She’s known as ‘Valdemort’ and is one of the fiercest contenders on the Dublin roller derby scene, jetting around the world with the city’s A -Team. Yet just six years ago, bank worker Val Nicosia couldn’t even stand up on a pair of roller skates. It was a random chat at Comic Con with Scottish comic book artist Gary Erskine – who wrote Roller Grrrls about the contact sport – that inspired Val to get her skates on.

“I had this notion I wanted to skate along Venice Beach, like the girl in the Lucozade ad – it looked so cool,” says the 33-year-old. “Gary told me there was a club in Dublin and two weeks later, I turned up for a starter free-for-all. I was like Bambi – I couldn’t stand, never-mind turn on skates. I’d done martial arts when I was younger but gave it up. For years, I didn’t find anything else that appealed to me.” Val’s tale of falling out of love with sport is a common one. Alarming figures show half of all girls quit sport before the age of 14 – three times the dropout rate of teenage boys. Some think sport just isn’t for them. But the truth is, they probably haven’t found the right one.

Recent Trinity graduate Imogen McGuckin’s mother Jennifer – a keen fencer – first handed her a sword when she was 16 and they joined a local club together. But Imogen, now 22, quit after a few months as there was nobody her age doing it. During her first year studying English, she started dating a guy who was a keen fencer.

“I joined Trinity Fencing Club on a whim so we’d have more in common,” remembers Imogen. While the romance floundered, she fell head over heels with the sport.

“We broke up but the club members were so lovely, I wanted to stay. The camaraderie and the brilliant coach Colm Flynn kept me there and I fell in love with it.”

Despite being a relative novice at 19, Imogen is now ranked number two in Ireland in women’s sabre – one of three fencing weapons.

“Before fencing, I never had an enthusiasm for sport,” she says. “I’d played hockey and did horse-riding when I was younger, but didn’t enjoy or put work into them. I found sabre suited me much more than foil, which my mother played. More aggressive and assertive people pick up sabres, foil is for more calculated, methodical people, while épeé is a waiting game.

“Mum is glad I found something I love so much. You don’t have to be a traditionally sporty person to be good at fencing – I wasn’t particularly sporty. It really brought on my love for sport.”

Postwoman Sarah McCord admits she was too lazy and hungover to bother with sport while in her 20s and most of her 30s. “I played a bit of football as a teenager, but I’d dropped out, like a lot of girls,” says Sarah. “Then I was more interested in going drinking, having a good time at weekends. I was hungover so I wasn’t getting up to go and do sport.”

But Sarah’s discovery of yoga in her mid-30s led her to sign up to a tai chi class, where her teacher Younis Fakhfakh spotted her potential and encouraged her to train in budo taijutsu, a martial arts fusion. Now she’s close to achieving her black belt and Younis is urging her to lead a women-only course.

“I don’t want to be a fighter or even go into competitions, although I could, but it’s more of an internal martial art – it’s not aggressive,” explains Sarah (39), who trains every Saturday in the Phoenix Park with Younis’s group for three and a half hours. “You can apply the training to so many parts of your life. It’s taught me I can stay calm and figure things out. It’s a great way to deal with stress. It’s physical, but concentration and focus is a huge part of it.

“I’m fitter and I know I can defend myself – not that I expect someone to attack me. It gives me confidence to handle things, be it a physical confrontation or a mental one. I know to stay relaxed and not panic. When you’ve been in a lock, pinned to the ground and don’t freak out, that translates into handling everything life throws at you.”

Katey Harvey (29) from Bray has been obsessed with WWE wrestling since she was 10.

“All the boys and girls on my street would pile into someone’s sitting room every Saturday at 7pm and watch WCW on Channel 5,” says Katie, who runs Fight Factory, Ireland’s first pro-wrestling gym. “I loved the likes of Chyna, one of the first girls who broke the mould. We played wrestling on the road, and set our alarms for late night WWE pay-per-view fights and talk about it in school.”

By the time Katey was 14, wrestling was no longer “cool”. “Everyone stopped watching it but me – I’d go to NWA Ireland shows in Bray with my two brothers.”

Wrestling took a back seat when Katey went to college to study TV and film. One day in the pub, they were throwing around ideas about a subject for a documentary module.

“I mentioned the wrestling school and a friend Paul was like, ‘you watch wrestling?’. He was mad into it too so we headed down to the school to ask if we could make a documentary. After filming a few sessions, we started training as wrestlers and the documentary never got made. I was 21 and it’s become my life.”

Ruth McGuigan stumbled into a game of water polo at her local pool when she was 13.

“The water polo crowd were in when I went for a swim, so I jumped in and it was the best thing I ever did,” says Ruth, who coaches the Irish girls’ national team and runs her own recycling company. “You don’t have to be a brilliant swimmer. Throw a ball into the pool and it comes alive – it’s much more craic. What you miss in swimming, you make up for in mental agility. There’s pressure, but it’s shared, and it’s social as well as competitive. I never did a solo competitive sport.

“You’ve a community of girls around you who chat about everything. Role models are so important. Women used to leave their activities to their children, while men kept up with sports. Now our ladies leave the buggies by the bank and their girls want to jump into the pool like mammy, the way boys used to want to be like daddy.”

All five women agree sport has enriched their life in many ways beyond health and fitness. “Wrestling has literally given me everything,” says Katey. “My partner Phil was my coach – we run the school together. I’ve met all my best friends wrestling. We’re each other’s family. It hit home in January when I broke both my arms wrestling, had major surgery and had to move home to my mother’s. The loneliness hit me not training, but every Friday, the guys piled into a car and drove out to me with snacks and DVDs and got me through this awful time. I’d be lost without my family.”

Skater Val, who moved to Ireland from Italy 15 years ago, also thanks sport for her ‘family’.

“Spending so much time together, we bond in ways you don’t with other people,” she says. “The support and friendship is amazing. My colleagues at the bank think I’ve the best life ever, always jetting off. The madness and the endorphins from training perfectly balances all the sitting at the desk at work. I ask myself so many times what I did before roller derby. I did the usual – cinema, reading, the gym once in a while, but this gave me a whole new life that I wouldn’t change for the world.”