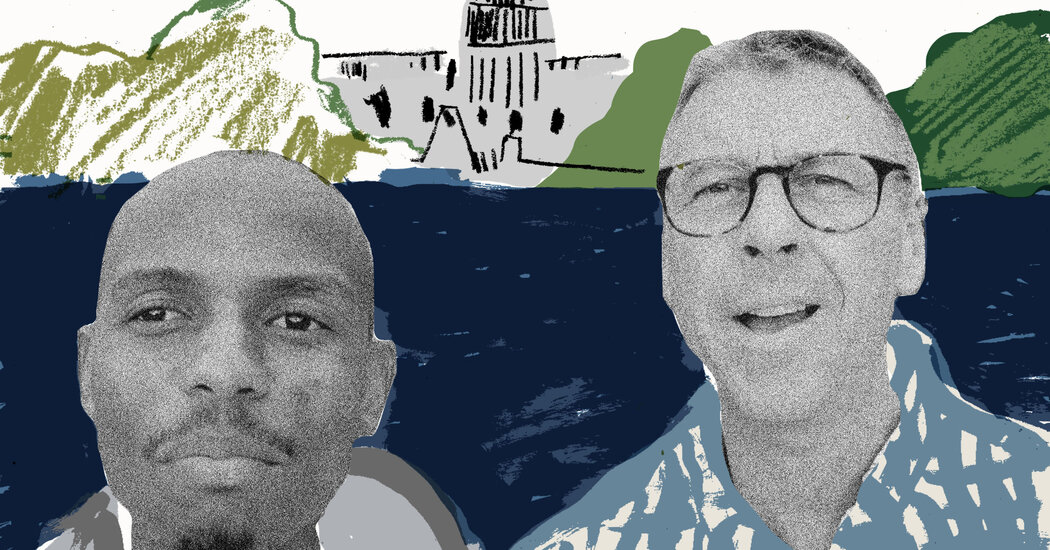 When my son’s life was stuck in neutral last fall, I decided to take him on a cross-country road trip. I thought an adventure would give him new experiences and perspectives, open his mind to possibilities.

Driving coast-to-coast helped change my own stalled life 30 years ago. There’s a reason stories of the road have long been a fixture of America.

And it would be good to spend some time together; we don’t get to see each other much. We have a unique relationship. Indeed, we don’t fit most conventional ideas of family. We’re not bonded by DNA or formal paperwork, but in our hearts and minds we’re father and son.

We met years ago through an online mentoring program: a middle-aged, gay, white atheist in a comfortable Boston suburb and a straight, Black, evangelical teenager living with his mom in a South African settlement. We were an unlikely match, to say the least, but something clicked. I saw him as a delightful goofball bubbling with the hopes and dreams of youth. In me, he saw a window on a different world.

When the mentor program folded, our relationship grew. Knowing that his aspirations were out of reach given his circumstances, I put him through college — helping a naïve kid from a farm school navigate some pretty rough roads. I became a coach, cheerleader and enforcer. He called me his best friend ever. He called me dad.

Gradually he was transformed. His shyness and insecurity fell away, replaced by bold confidence. He saw for himself a path to a bright future and knew he’d get there. We were thrilled when he landed a job after graduation. It was just an office gig, but it was experience — in a year he’d get something better.

But South Africa’s economy has scant opportunities for young people, and one year became four. He turned grouchy and tired and bitter. His idealism and ambition had withered; his spark was fading.

We’d worked so hard. He’d come so far. When he was in college, he had soared. I would not let him crash back to earth, defeated.

I was sure the trip would be cinematic, like old Kodak ads marking the times of our lives. We’d had only a few brief visits over the 10 years we’d known each other, and I relished the chance to be an in-person dad for a couple of months to my son, who’d turn 27 along the way. I pictured sun-filled days marveling at the majestic sights of America. Trading glances over inside jokes. Singing to the radio in perfect pitch. And heartfelt talks brimming with fatherly wisdom as we sped across a sagebrush desert.

What I didn’t anticipate were the screaming matches. Conflict isn’t my style. I grew up in New England in a family of Catholics from Eastern Europe: the trifecta of repressed silence. We don’t bask in good feelings. And bad feelings are simply shoved under the rug — which by now looks like the Himalayas. When things get really tough, we walk away. Sometimes forever.

But escape wasn’t an option this time. Early in our relationship, my son told me that if I ever left him his life would crumble. I promised that would never happen.

So we fought. It was only twice, but each was enough to register on the Richter scale.

Things were fine at the start. From the Statue of Liberty to the Lincoln Memorial. Through the Shenandoah Valley, Charleston and Savannah. A soccer match in Atlanta and birthday dinner in Montgomery. It was three weeks of smiles, selfies and souvenirs. It was everything I’d hoped it would be.

And then, on a steamy night in New Orleans, a snide comment from him set things off. It quickly escalated into a sidewalk scene to rival any “Real Housewives” episode. For 10 minutes we yelled at each other as tourists eyed us warily and moved out of the line of fire. We argued in disconnected bursts about respect, expectations and attitude. Finally, panting and spent, we hugged and then ducked into a nearby bar — and were soon bopping along to a tight blues band.

And we kept on bopping. Through more music in Memphis. Barbecue in Fort Worth. Star-filled Santa Fe skies. The Grand Canyon and Hollywood Boulevard and Big Sur.

Then Yosemite: a battle as epic as the scenery. After two fun-filled days we were heading back for T-shirts and a last look. I can’t remember what lit the fuse. As the car barreled along the winding road, a decade of things held back finally exploded, the volume cranked up to 11. If I’d missed a curve and we hurtled down the mountain, we wouldn’t have even noticed. The small space was thick with anger and resentment, frustration and disappointment. For half an hour we brawled, until finally reaching the valley.

I was furious and exhausted. Worried. Frightened. So much came out that couldn’t be taken back, things that probably shouldn’t have been said. It was bad.

After buying our mementos in silence, I pulled over for a final glimpse of El Capitan: solid, immovable, breathtaking. We lay in a meadow at the base, pointing out climbers as they inched toward the sky, small spots of color on a vast wall of stone. Then we headed to Tahoe, the morning’s conflict fading in the rearview mirror.

The next day, on the long drive to Idaho, we had a deep, honest talk about his life and the difficulties he faces. About what he’d learned so far from the trip — and what he might take home to turn things around. We never mentioned the argument.

Sometimes the best part of travel isn’t the postcard scenes, but the quiet spaces in between — when the bits and pieces of experience are sifted and sorted. Rolling across the stark emptiness of Nevada, I looked at my son, snoring softly and trusting that he’s in good hands. This stranger who dropped into my world and gave me a crash course in parenting like no other. Who taught me long overdue lessons about myself. And life. And love.

It’s always amazed me that no matter how much he disappoints me or ticks me off or drives me crazy, I don’t love him any less. And here, a day after the biggest fight I’d ever had — our bond wasn’t diminished at all. It was actually stronger.

This isn’t the case in every relationship, I know. Some arguments end things. But regardless, they move the ball. With so many people throughout my life — friends, lovers, family — the ball hasn’t moved. It’s right where I left it. When I closed the door and walked away. Unwilling to fight, to risk, to trust.

My son’s situation requires him to have courage every day. It was time for me to show some of my own.

Michael Beckett is a writer working on a memoir about his role as a surrogate dad.