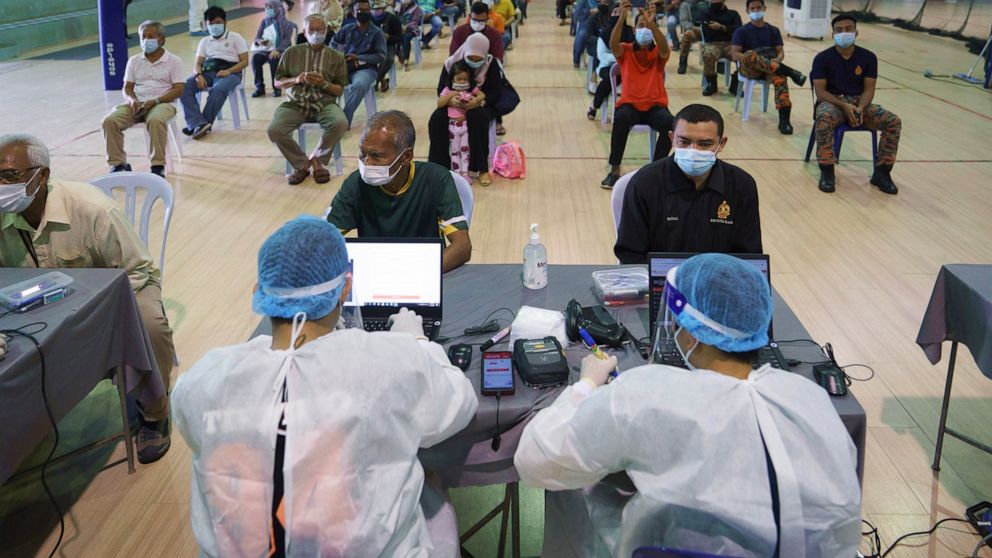 Attorney General Aaron Frey said Tuesday he issued the advisory in response to reports of improper administration of the vaccines. Officials in Maine, including Democratic Gov. Janet Mills, recently chastised MaineHealth for providing coronavirus vaccinations to out-of-state consultants hired to fight an effort to unionize nurses.

MaineHealth has called its decision to vaccinate the consultants a mistake. Frey said providers are required to follow the state’s protocols about who is eligible for the vaccine. Maine is still in an early stage of rolling out the coronavirus vaccine and is focusing on older residents and health care providers.

Frey said providers who ignore the state’s protocols risk hurting the public trust in the response to the pandemic.

— COVID-19 bill would scale up ability to spot virus mutations.

— Latinos in U.S. face fear and other barriers to getting COVID-19 vaccines

— Pandemic stresses take a huge toll on college students, who struggle to pay for food and housing as jobs and internships dry up

HERE’S WHAT ELSE IS HAPPENING:

COLOMBO, Sri Lanka – Sri Lanka announced Wednesday its restriction on travelers from Britain entering the country due to the new variant of the coronavirus has been lifted immediately.

The foreign ministry said passengers from Britain no longer must submit to a 14-day quarantine and PCR tests.

Sri Lankan health authorities have found patients with the British variant from several parts of the country despite the restrictions.

LOZNICA, Serbia — Dozens of Bosnian Serb medical workers have crossed into neighboring Serbia for vaccination as Belgrade seeks to show solidarity in the region after launching mass inoculation in the country.

The vaccination on Wednesday took place in three Serbian towns that are close to the border with Bosnia. Officials say several hundred health staff from Republika Srpska, which is the Serb-run half of Bosnia, will receive jabs daily.

More than 2,000 Bosnian Serb health workers have applied for vaccination in Serbia, which has mainly used China’s Sinopharm vaccines, along with Russia’s Sputnik V and to a lesser extent Pfizer-BioNTech jabs.

So far, Serbia has vaccinated more than 600,000 people and has started administering second doses. The Balkan country has been among the top countries in Europe when it comes to vaccination rate.

Health Minister Alain Berset said Wednesday that the federal government also is proposing to reopen museums, libraries and some other leisure facilities, with mask-wearing and distancing rules, and allowing groups of up to 15 people to meet outdoors. He said a final decision will be made next week.

Restaurants, bars, sports facilities and cultural institutions in Switzerland have been closed for weeks, though the country didn’t shut down skiing — unlike its neighbors. Berset said it has been able to halve new infections in a month but needs to be cautious in reopening — with new steps being taken roughly every four weeks.

President Guy Parmelin said that “lifting all the measures in one go would be unrealistic and dangerous at this point — it would risk quickly reducing the nothing the results we have obtained until now.”

BRUSSELS — The European Union announced that it has agreed to buy a further 300 million doses of Moderna’s vaccine against COVID-19 and was injecting almost a quarter of a billion euros (almost $ 300 million) into efforts to counter the threat of coronavirus variants that are spreading on the continent.

The news came hours after Pfizer and BioNTech said they had signed a deal to deliver an additional 200 million doses of their vaccine to the bloc.

The EU Commission said its second contract with Moderna provides for an additional purchase of 150 million doses in 2021 and an option to purchase an additional 150 million in 2022. Should the EU have enough supplies by then it will consider donating the vaccine shots to lower and middle-income countries.

COPENHAGEN, Denmark — Denmark could reopen large part of the society if people get tested twice a week, the Danish government said Wednesday as it announced it had bought 10 million of a new type of quick coronavirus tests.

Health Minister Magnus Heunicke said Denmark has bought 10 million of the new tests where the cotton swab isn’t being stuck so high up in the nose but only a few centimeters. The first batch of 400,000 had already arrived. The name of the test was not immediately available.

“They are just as good and accurate as the ones” we have been using, Heunicke said.

The Dutch government also said it is pumping more than 8.5 billion euros ($ 10 billion) into schools and universities to support students and teachers hit by the coronavirus pandemic.

Denmark has been keeping all shops except food stores and pharmacies closed as well as banning public gatherings of more than five people. Cafes and restaurants also remain closed but can still sell takeout food. Gyms, public libraries, beauty parlors and hairdressers are shut until Feb. 28.

BRATISLAVA, Slovakia — Slovakia is asking other European Union countries to deploy their medical personnel in the hard-hit country to help treat COVID-19 patients as its hospitals struggle under the load.

The government has initially requested a deployment of 10 doctors and 25 nurses to work in intensive care units for at least one month.

Slovakia has the most COVID-19 deaths by size of population in the world amid a surge of a highly contagious coronavirus variant first seen in the U.K. Another 105 people died Tuesday, giving the nation of 5.4 million a total of 6,168 confirmed virus deaths.

BERLIN — Germany’s health minister says variant of the coronavirus first detected in Britain now accounts for more than a fifth of all positive tests in his country.

Scientists say the variant first found in Britain appears to spread more easily and is likely more deadly than the original virus. Spahn said it can be expected that the U.K. variant will become the dominant variant in Germany soon.

Germany has seen over 66,000 deaths in the pandemic and recently put strong controls on its borders with Austria and Italy’s Tyrol region to try to keep virus variants from spreading further.

ZAGREB, Croatia — Croatia’s health minister says around 1 million doses of Russia’s Sputnik V coronavirus vaccine could be imported into the European Union nation even without its approval from the bloc’s drug regulator.

Health Minister Vili Beros said Wednesday that because Croatia, like many other EU countries, is struggling to get agreed doses of EU-approved vaccines, Croatia’s drug agency will decide on the effectiveness of Sputnik V.

Sputnik V has yet to be approved by the European Medicines Agency.

Beros said the final decision on the procurement of the Russian vaccine will depend on how quickly it could arrive in Croatia.

LONDON — British regulators have approved the world’s first coronavirus human challenge trial, in which volunteers will be deliberately exposed to the virus to study how infection spreads.

The government said Wednesday that the U.K.’s clinical trials ethics regulator has approved the trial and it will start within a month. The aim is to develop more effective vaccines and treatments for COVID-19.

Researchers are seeking up to 90 volunteers aged 18-30, who will be exposed to COVID-19 “in a safe and controlled environment.” The study will try to determine the smallest amount of virus needed to cause infection.

Young people are being asked to volunteer because they have the lowest risk of serious illness from the coronavirus. Participants in the study will be monitored 24 hours a day.

PRAGUE — Coronavirus infections in the hard-hit Czech Republic are rising and putting hospitals under even greater pressure, even as new cases are falling in some parts of Europe.

Three Czech counties on the borders with Germany and Poland have been under a complete lockdown due to a high occurrence of a contagious coronavirus variant first discovered in Britain. Health Minister Jan Blatny said Wednesday that if infection trend continues, the lockdowns might need to be expanded to other parts of the country in the coming weeks.

With 6,171 COVID-19 patients in hospitals and 1,196 in intensive care, the country’s health system is reaching its limits, Blatny said.

He said the ministry is considering ordering medical students to work in hospitals and planning to ask neighboring countries to treat Czechs once the hospital capacity reaches 90%.

STOCKHOLM — The Swedish government warned Wednesday of possible local lockdowns for the first time in the pandemic as it fears a new wave following an increase of cases in some regions after weeks of a relatively stable spread of the coronavirus.

“The situation is still serious,” Social Affairs Minister Lena Hallengren said. “There is a clear risk of a third wave.”

In recent weeks, nationwide numbers in Sweden have been dropping slowly but certain regions are now on the rise.

She added that Sweden didn’t plan a shutdown today but “we do not intend to wait until it is too late.”

Last month, the Swedish parliament adopted a temporary COVID-19 -pandemic law that would allow the closing of shopping centers and shops and a halt to public transport and public activities to curb the spread of the virus. Those breaking it would face a fine.

Sweden has so far adopted mild coronavirus restrictions without enforced lockdowns and relied mainly on citizens’ own social distancing and other measures to fight the pandemic.

UNITED NATIONS — British Foreign Secretary Dominic Raab says he will urge the U.N. Security Council to adopt a resolution calling for cease-fires in conflict zones to allow the delivery of COVID-19 vaccines.

Britain holds the council presidency this month and Raab is chairing a virtual high-level meeting of the U.N.’s most powerful body on the problem of ensuring access to vaccines in conflict areas on Wednesday. Diplomats said 11 foreign ministers are expected to speak, including U.S. Secretary of State Antony Blinken.

Britain says more than 160 million people are at risk of being excluded from coronavirus vaccinations because they live in countries engulfed in conflict and instability including Yemen, Syria, South Sudan, Somalia and Ethiopia.

“Global vaccination coverage is essential to beating coronavirus,” Raab said ahead of the meeting. “That is why the U.K. is calling for a vaccination cease-fire to allow COVID-19 vaccines to reach people living in conflict zones and for a greater global team effort to deliver equitable access.”

Mexican Foreign Minister Marcelo Ebrard said that Mexico will stress the importance of equal access for all countries to COVID-19 vaccines at the council meeting.

TOKYO — Months after other major economies, Japan has begun giving its first coronavirus vaccines to front-line health workers. Many are wondering if the campaign will reach enough people, and in time, to save a Summer Olympics already delayed a year by the worst pandemic in a century.

Despite recent rising infections, Japan has largely dodged the kind of cataclysm that has battered other wealthy countries’ economies, social networks and healthcare systems.

But the fate of the Olympics, and the billions of dollars at stake should the games fail, makes Japan’s vaccine campaign crucial. Japanese officials are also well aware that China, which has had success eradicating the virus, will host next year’s Winter Olympics, something that heightens the desire to make the Tokyo Games happen.

WELLINGTON, New Zealand — A lockdown in the New Zealand city of Auckland will end at midnight, the government announced Wednesday after concluding a coronavirus outbreak had been contained.

The nation’s largest city was put into lockdown on Sunday after three unexplained cases were found in the community. It was the first lockdown in six months in a nation which so far has managed to successfully stamp out the spread of the disease.

The move to end the lockdown came as health authorities said the outbreak had grown by three cases to six in total. But Ardern said the additional cases were to be expected because they involved close contacts.

The office of President Nayib Bukele says the shipment of AstraZeneca vaccine will arrive on a flight from an Indian plant where it is produced.

The country has recorded about 58,000 coronavirus infections and 1,758 deaths from COVID-19 so far in the pandemic.