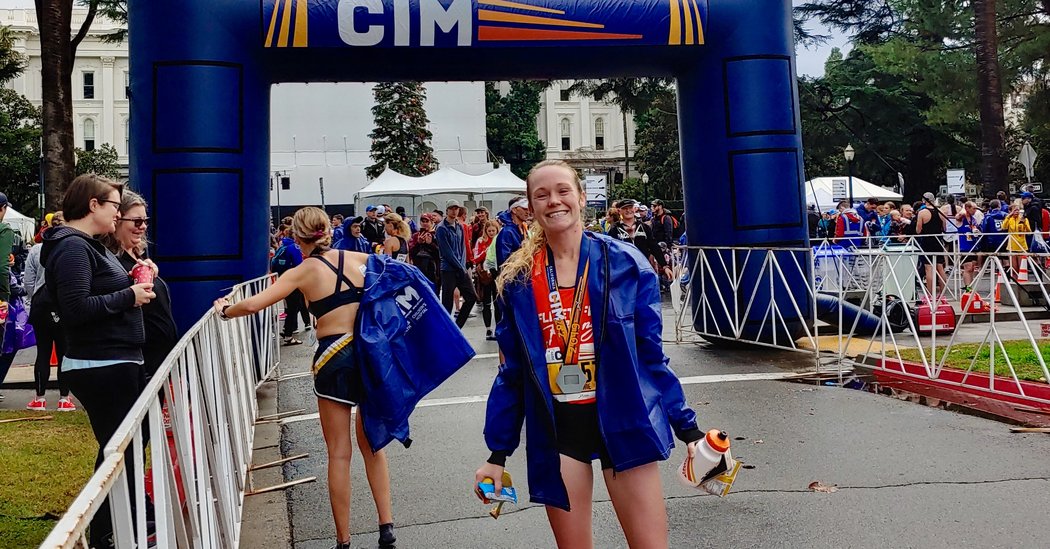 Welcome to the Running newsletter! Every Saturday morning, we email runners with news, advice and some motivation to help you get up and running. Sign up here to get it in your inbox.

When a few hundred runners line up to compete at the U.S. Olympic Marathon trials in Atlanta on Feb. 29, Jamie Adkins will be one of them — she squeaked her way in, finishing just two seconds ahead of the cutoff time in a popular qualifying race last weekend.

At the California International Marathon in Sacramento on Sunday, Adkins, whose full-time job is not running, was the last woman to finish in under two hours, 45 minutes, the time needed to qualify to run in the Olympic Marathon trials. Race organizers put up a finish line video — zip ahead to about 14:30 to see the final batch of women qualifiers come in. I’ve watched it about a dozen times and I still worry each time that Adkins isn’t going to make it.

“It was super cool, a mass of girls at the finish line, all just watching the clock and jumping up and down,” she said.

Adkins, 25, an occupational therapist from Colorado Springs, played soccer growing up and ran for her high school track and cross-country teams, but said she didn’t take it too seriously. She walked onto the University of Southern Indiana track team and ran in one national championship, in her senior year: the 10,000 meters at the 2016 N.C.A.A. Division II Outdoor Track & Field Championships, where she finished 12th.

Adkins expected that to be it for her running career, but then realized that there were still ways she could be competitive. She ran the 2017 Indianapolis Monumental Marathon in two hours, 59 minutes, seven seconds. When she moved to Colorado, she thought she was “going to be done with competitive running and do other things, like rock climb and hike and camp.”

But she met a group of fast runners through the Colorado Running Company, a running store in Colorado Springs. “They talked me into trying to actually train for the Boston Marathon instead of just running it,” she said. She trained with a group of the women who were aiming to make the 2:45 Olympic trial qualifying standard but caught strep throat a week before the 2019 Boston Marathon and finished in just over three hours.

She got talked into trying again by her friends and her boyfriend, and signed up late for the California marathon, known as CIM. That meant she missed getting an elite runner bib, and the 2:45 pace group was for runners with elite starts only. Instead, Adkins lined up with the general runner crowd, about 10 seconds behind the elite women’s pack (that’s why her chip time, which measures from when she crossed the starting line herself to her finish, is two hours, 44 minutes, 48 seconds). Only gun time — the time the race starts, not the moment you cross the start line — is considered valid for qualifying purposes.

“It was quite easy to find just a massive pack of girls all running in sync,” she said.

Her plan was “to just hang onto that group,” she said. “At about mile 23, I thought, ‘Oh man, this is where it hurts.’” At that point, the group that was still in the hunt to qualify for the Olympic marathon trials started to break apart.

“I was a little afraid to try to go,” Adkins said. “What if I trip and fall? What if I don’t make it? What if my legs just give out?” Then she got down to one mile, a half mile. Then at the 800 meter mark, “I was just like yelling at myself to keep going with just everything I had, and then there was a 400 meter, a 200 meter, and then you make that turn and see the finish. I was all out, everything I had for that last bit for sure.”

According to the Sacramento Running Association, which puts on the race, 72 women and 37 men ran under the trials qualifying time. While the qualifying window is open until Jan. 19, and runners can also qualify to run in the trials with a half marathon time, CIM is a popular qualifying spot because it’s a fast course and because so many runners shoot for the same standard, which means runners keep pace with each other to make that time.

Adkins said she is not looking forward to running another marathon so soon (when I talked to her Wednesday, she said she was still having trouble walking), but she is looking forward to the experience of competing in a fast field, even if she won’t actually be able to qualify for the Olympic Marathon team. That’s because the Olympic team qualifying standards for the Tokyo Olympics require an even faster “A” level standard time of 2:37 for women (it’s 2:15 for men).

“I’m most looking forward to just the experience in getting to run with the most talented distance runners in the country,” she said. “That’s an honor to me to be out there.”

Do you have stories about squeaking your way into a race? Let me know on Twitter! I’m at @byjenamiller.

Forward it to your friends, and let them know they can sign up here.