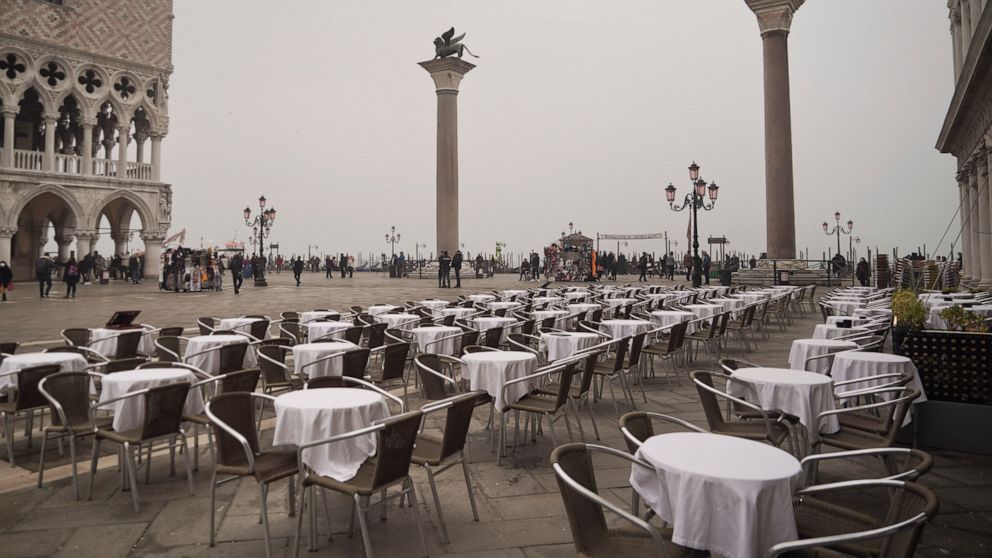 SEOUL, South Korea — The U.S. military says one of its soldiers based in South Korea tested positive for a new virus, the first U.S. service member infected.

A U.S. military statement said Wednesday that the 23-year-old man is in self quarantine at his off-base residence.

It says the soldier was originally based in Camp Caroll in a town near the southeastern city of Daegu, where most of South Korea’s virus cases are clustered.

South Korea said Wednesday it had almost 1,150 cases of the new coronavirus, the biggest outbreak outside mainland China.

About 28,500 U.S. troops are stationed in South Korea as deterrence against potential aggression from North Korea.

THIS IS A BREAKING NEWS UPDATE. AP’s earlier story is below:

South Korea has reported 169 more cases of a new virus, mostly in the southeast city of Daegu and nearby areas, bringing its total number of infections to 1,146.

China on Wednesday reported another 406 cases of the new virus, along with 52 additional deaths, all of them in hard-hit Hubei province and all but 10 in the epicenter of the city of Wuhan.

South Korea’s Centers for Disease Control and Prevention said Wednesday that 134 of the new cases were confirmed in Daegu, where the government has been mobilizing public health tools to contain the virus. Another 19 cases came from the neighboring North Gyeongsang Province towns.

The country has also reported 11 fatalities from the virus, mostly at a hospital in the county of Cheongdo, near Daegu. Many of the cases have been tied to a Daegu church and authorities were tested its local members.

The U.S. Centers for Disease Control and Prevention earlier called for Americans to be prepared for the illness to spread there, adding new urgency to response efforts that had long focused on China and its Asian neighbors.

Chinese officials have reported a slowing in the number of new cases in recent days but it still has most of the world’s 80,000 cases and 2,700 deaths.

New outbreaks were being reported, however, in places as far-flung as Italy and Iran, France and Algeria, and Spain’s Canary Islands. The tiny Persian Gulf nation of Bahrain counted 17 cases, including a school bus driver who had transported students as recently as Sunday.

The head of Iran’s virus task force tested positive for the virus just a day after urging the public not to overreact about its spread. Iraj Harirchi posted a video online later, promising authorities would bring the virus under control within weeks.

But a ministry spokesman, Kianoush Jahanpour, said it could take at least until the Persian New Year’s holiday on March 20, or as long as late April, to contain the disease. “We don’t expect a miracle in the short term,” he said.

The World Health Organization said the fatality rate for the new COVID-19 illness was between 2% and 4% in Wuhan, the city where the illness was first detected late last year, and 0.7% elsewhere in China.

The reason for the discrepancy was partly because the disease hit Wuhan early and fast, when “people didn’t know what we were dealing with, were learning how to treat this,” Dr. Bruce Aylward, a WHO envoy who led a team just back from China, told reporters Tuesday.

At the beginning of the outbreak, “people were finding severe disease, that’s why the alarm bell went off,” Aylward said. But now with more aggressive testing, mild cases are being diagnosed and isolated.

In Italy’s north, where more than 200 people were sickened, a dozen towns were sealed off and police wearing face masks patrolled. Italian Health Minister Roberto Speranza huddled in Rome with counterparts from bordering countries — France, Switzerland, Austria and Slovenia — as well as with those from Germany and Croatia, two countries whose citizens are among frequent visitors to Italy.

Among the shared views emerging from the meeting, Speranza told reporters, was this one: “Closing borders is inappropriate” as a response. Italian officials reported 322 cases of the virus overall, including 11 deaths.

Croatia and Austria reported their first cases of the virus. And an Italian doctor staying at a hotel in the Canary Islands tested positive for the virus, prompting the quarantine of hundreds of guests.

Croatia, Hungary and Ireland advised against traveling to Italy’s affected area, one of a number of government moves seeking to limit further exposure.

Uncertainly remained over how best to stem the spread of the illness. Italy had taken Europe’s most stringent preventative measures and yet became home to the biggest outbreak outside Asia. Experts in Japan, with one of the world’s most sophisticated health systems, acknowledged the country’s handling of a virus-stricken cruise ship was flawed and could have allowed the problem to magnify.

Japanese officials said they would urge a change to the country’s deeply ingrained work culture in a bid to stem the illness. The government urged employers to allow workers to telecommute and have more flexible hours, simple moves Japanese Prime Minister Shinzo Abe expressed hope could help control the spread.

Japan’s case total of 860, third highest behind China and South Korea, includes 691 passengers and crew from the Diamond Princess. Four former passengers on the ship have died and more than a dozen people who were evacuated by their home countries later tested positive for the virus. Six government officials involved in the quarantine effort also became sick.

Overnight, 445 Filipinos who were mostly crewmembers on the ship flew home to begin a quarantine at an athletic facility in a northern province. Eighty Filipino crew members who tested positive for the virus stayed behind in hospitals in Japan.