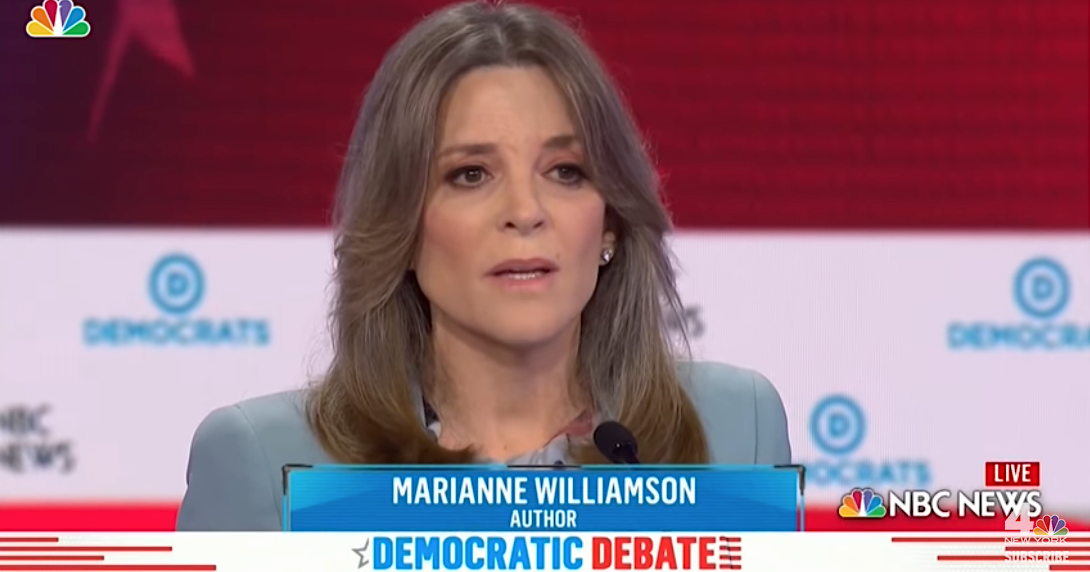 During night 1 of the second Democratic debate this week, presidential hopeful Marianne Williamson cut through the noise and garnered national attention. The self-help author and AIDS spiritual guide called out the “dark underbelly of American society, the racism, the bigotry” and claimed that her opponents’ wonkiness won’t combat the “dark psychic force of the collectivized hatred that [President Trump] is bringing up in this country.” She then went full throttle in support of reparations for slavery. (The CNN clip below features both memorable exchanges, at the beginning and at the 8:30 mark.)

Many Americans hadn’t heard of Williamson before these debates. She made a name for herself as a guru among the HIV community during the epidemic’s worst days (before lifesaving treatment arrived in 1996) and has published best-selling books and made numerous appearances on The Oprah Winfrey Show.

What belief system does Williamson espouse? Well, that’s complicated, as are most questions about spirituality, religion, disease and health care. But here’s a primer on Williamson’s philosophy, including relevant links, curated through the lens of health, HIV and politics.

Williamson, 67, grew up in Houston in a Jewish family. As a young adult finding her way in New York City and performing as a cabaret singer, she came across the 1976 spiritual guidebook A Course in Miracles, written by Helen Schucman, a psychology professor at Columbia University who claimed the book was simply a transcription of divine messages she had received from Jesus (Christian leaders have countered that it was possibly a demon masquerading as Jesus).

The book’s message that reality is an illusion and that love and forgiveness produce miracles transformed Williamson. “Before the Course, I felt like I was on a desperate journey to find God,” she told The New York Times in a recent in-depth profile. “But as much as I climbed up this huge flight of stone steps in front of a cathedral, my knees bloody and my elbows bloody, the cathedral door was locked. And when I read the Course, I thought I understood the key.”

In the 1980s, she moved to Los Angeles and taught classes based on the book. This, of course, coincides with the beginning of the AIDS epidemic. Williamson became an early advocate. She founded Project Angel Food to deliver meals to people with AIDS, as well as the Manhattan and Los Angeles Centers for Living, which offered non-medical support groups for people with HIV and other life-altering illnesses (at this time, her sister was diagnosed with breast cancer).

If you ever read an article saying that I told people with AIDS they didn’t have to take their medicine because positive thinking would cure it; or that I ever told people who got sick that negative thinking caused it; please know both those things are complete and utter lies.

“It was like a war zone in ways that many people today cannot even imagine,” she told LGBT newspaper The Washington Blade in an interview last week. “It took a while before the diagnosis of the virus was anything other than a death sentence. And so all we had was our love for each other, but love for each other was so prevalent. People were so willing to do anything.… [In the introduction to] my new book, Politics of Love, I talk about it…in terms of my experience having been through a collective trauma. That’s what is was. It was a collective trauma.… it’s an experience like no other. And I’m glad for people who have never experienced it. Don’t get me wrong. But those of us who did experience it, it imprints them.”

While involved in AIDS activism, Williamson published her first book, 1992’s A Return to Love: Reflections on the Principles of A Course in Miracles. It became a mega best seller. Since then, her shamanistic star has continued to rise.

Today, the presidential candidate faces criticism that she is anti-science and has said, for example, that people with HIV have invited the disease into their lives. She refutes this (see her tweet from June, above), though she does seem to teach that we “manifest our own realities” (see her lecture video below).

In the Blade article, a longtime friend of hers recalled that Williamson gave men with HIV money to buy meds and took them to medical trials for new drugs. In the same interview, Williamson acknowledged not being familiar with Trump’s “Ending the HIV Epidemic: A Plan for America” initiative, though she added, “I support any initiative and from any administration…that would be in support of ending that epidemic.”

In an interview with HIV Plus magazine from earlier this year, Williamson expands on her ideas about AIDS policies and funding. “For a country, as much as for an individual, how you spend your money is an expression of your values,” she says. “So what does money translate into with AIDS policy? It translates into more science, more scientific research, more medicine, more doctors. It’s not a mystery here, so when you have a $ 2 trillion dollar tax cut, where 83 cents of every dollar went to the very richest corporations and individuals… then what you’re doing is squeezing a huge amount of public treasury into the hands of a very few people, leaving less and less money available for the humanitarian and deeply democratic causes that would truly enable people to thrive.”

Cancer survivor Anne Stockwell conducted another insightful interview in Whole Life Times. Stockwell asked Williamson whether cancer is a manifestation of inner anger and if not, then why so many people think Williamson promotes similar beliefs.

“Anyone can be taken out of context,” Williamson replied, “but what I have said is that thought is the creative consciousness for all experience. But that doesn’t mean that the person who contracts the illness is necessarily the one whose consciousness was wrong-minded. For example, a child gets a brain tumor that we know is related to a carcinogen that’s in the river near where that child lives. Did the diseased condition come from consciousness? Absolutely—the fact that we put short-term economic gain before the health and well-being of the living things on this planet.”

This may sound reasonable to many, but not to Lindsay Beyerstein, who offers a counter point to this cancer anecdote in City and State New York. “That argument conflicts with her theology’s core contention: If the child’s cancer is real (and not just an illusion) and the poisoned water is the real cause, then her claim that only love is real can’t be true. Never mind that it was the chemical executive’s actions that caused the pollution, not his thoughts,” writes Beyerstein. “Williamson claims that ‘disease is loveless thinking materialized,’ noting that lovelessness can be collective, like racism, which does indeed harm people’s health and shorten their lives. But this doesn’t explain how children are born with diseases that have no environmental or social cause, such as cystic fibrosis.” (Beyerstein’s piece also links Williamson’s philosophy to Christian Science and a much older, female-centric health tradition called New Thought.)

In a Slate article, journalist Shannon Palus delved into the science-versus-shaman aspect of Williamson’s teachings. The result? “What I found about her positions was not straightforward. To call her a ‘wacko,’ as The Daily Beast does, or ‘just a skip and a hop away from a 14-part tweet thread about chemtrails,’ as Jezebel does, is to ignore a more complicated—and, I think, dangerous—force. She’s not necessarily against science; she’s just willing to prioritize feelings, hers or yours, over science or facts. Which, frankly, seems to be part of her appeal…. But the problem with Williamson is that, in extending the cozy affirmativeness of the self-help world to a broader sphere, she ends up overprioritizing feelings.”

In this aspect, Williamson might have more in common with Trump than she and her followers care to admit. Both prioritize emotions. It’s just that one goes for fear, and the other for love.