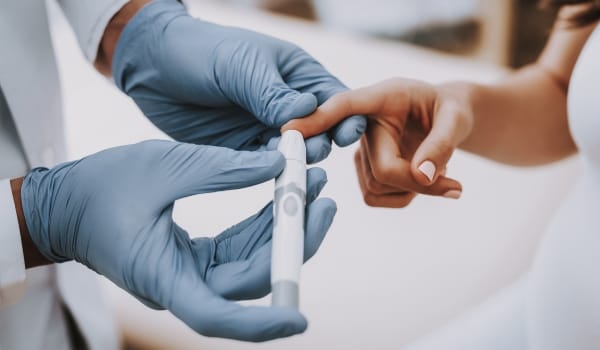 When John Kelly took part in a traditional rite of passage for the Irish – a year-long backpacking trip around Australia – he had no idea that a quarter of a century later he’d be exporting innovative Australian medical technology to the world.

“I visited in my early twenties and loved the quality of life. So I moved here permanently in my late twenties and continued my career in the medical device industry,” explains Kelly.

In the following years, the success of his two employers – ResMed and Unilife Corporation – in developing easy-to-use medical devices inspired Kelly to create a game-changing medical device of his own.

The experiences of his daughter had highlighted how costly and time-consuming the process of blood test diagnosis was for both patient and medical practitioner. Typically, one trained medical professional was required to extract the blood and send it to a laboratory to be analysed by another trained medical professional. Then, the patient was required to make another appointment to learn the results regardless of the outcome.

With this in mind, Kelly resigned from his position as Unilife Corporation’s Chief Operating Officer in 2008 and launched a start-up called Atomo Diagnostics the following year. His goal was to create a simple and accurate blood test that was as straightforward and immediate as a home pregnancy test.

Six years later Atomo Diagnostics has two rapid test products in market. The innovative design of the device is easy to use compared with competing products and makes it possible to test on-the-spot, allowing for self-testing in the future. With all of the various testing elements integrated within the one device rather than ‘bits in boxes’, the error margin is significantly reduced.

While it didn’t take particularly long for validation via government grants, private funding, accolades and industry interest, in the early days Kelly was very aware he was taking a huge gamble.

“There’s no way of knowing if these things are going to be a waste of time, effort and money until you’ve at least got a working prototype,” notes Kelly. “During that initial phase the company was funded with my money along with IDE’s, a product development company I partnered with to produce the device. If the assumptions in the business plan, of which there were many, had been wrong I would have lost several hundred thousand dollars and 18 months of my life.”

Kelly believes federal government grants and tax breaks played a crucial role in the success of what was to become the AtomoRapid™ platform. Funding at key stages of the business, from concept to commercialisation, were critical in getting the idea off the ground.

“Commercialisation Australia provides funding to businesses when they really need it and if they hadn’t provided it to Atomo who knows if we’d have been able to develop the concept, prove it in the market and get the private investment we subsequently got,” said Kelly.

Kelly took several personal measures to increases his chances of success. Despite having undergraduate qualifications in mechanical engineering and a Masters in systems engineering under his belt, Kelly embarked on an MBA at the University of Sydney in the hope of broadening his skill set and better support his company.

“I had the technical background but I felt I needed to round out my executive management skills. The MBA certainly provided that, along with allowing me to expand my network, which turned out to be useful. One of my classmates now sits on the board of Atomo.”

Improving the accuracy of testing

Following a huge amount of time and investment, by 2013 Atomo Diagnostics had a rapid blood test ready for testing in the field and had convinced diagnostic industry multinational BBI Solutions to help commercialise it. Seeing the opportunities to positively impact accuracy of HIV testing, the company decided to test first in the South African cities of Johannesburg, Cape Town and Pretoria. According to Kelly, errors with the existing tests result in tens of thousands of people being incorrectly diagnosed as negative for HIV each year. Those people then go without treatment and have a higher risk of unknowingly pass the disease on to others.

“We picked Africa because it has the highest disease burdens globally for HIV and malaria. It was not hugely profitable compared with other tests and other developed markets, however HIV and malaria have the biggest impact on global health and deserved our focus,” Kelly says.

Up against a number of competing rapid testing products, Kelly says healthcare professionals who used the all-in-one AtomoRapid™ HIV test found it far more straightforward than the ‘bits in a box’ tests sold by other companies.

“The feedback was fantastic – one woman who’d been testing people for 15 years used the AtomoRapid™ platform for one day then told her boss she never wanted to use anything else ever again,” says Kelly.

“It has made testing simpler and more accessible by combining the lancet [needle], capillary tube [storage unit] and test strip [results] into one device”, said Phillip Smith, project leader for mobile services at the Desmond Tutu HIV Foundation in South Africa

“Our counsellors found it was simpler to use than traditional tests and had a much clearer test strip, making it easier to identify the outcome. The device is so straightforward we’re now investigating the feasibility of allowing self-testing.”

Collaboration across the globe

Across the other side of the globe in New York, the Atomo products have also been turning heads. At the 2014 Medical Design Excellence Awards the AtomoRapid™ HIV (1&2) integrated rapid antibody test won ‘Best in Show’, with the judges declaring that the product was ‘earth-shaking in its potential significant impact on third-world detection of infectious disease, global public health and individual healthcare’.

The award is the latest in a bevy of accolades for the device ranging from the 2012 Engineers Australia Bradfield Award to taking out first place in Anthill’s SMART 100 Australian Innovations for 2014.

“We’ve just launched an AtomoRapid™ platform that tests for malaria in Africa, we’ve done a deal with a US company about adapting the platform for use as a home test for blood coagulation, we’re talking to some pharmaceutical companies about developing custom diagnostics for things such as allergies and kidney function, and we’ve recently signed a Memorandum of Understanding with a large listed Chinese healthcare company that want the rights to use our technology in their country. And that’s just what we’ve achieved with the current platform,” he says, hinting at big future plans for Atomo Diagnostics.

“Once we develop it further, particularly if we can incorporate multi-sensor technology, we can start doing things such as genetic testing or testing for a range of different diseases, rather than just one.”

If successful, these developments would mean a global game change for patients and the healthcare industry alike.

This post was previously published on australiaunlimited.com and is republished here under a Creative Commons license.

If you believe in the work we are doing here at The Good Men Project and want to join our calls on a regular basis, please join us as a Premium Member, today.

All Premium Members get to view The Good Men Project with NO ADS.

Need more info? A complete list of benefits is here.