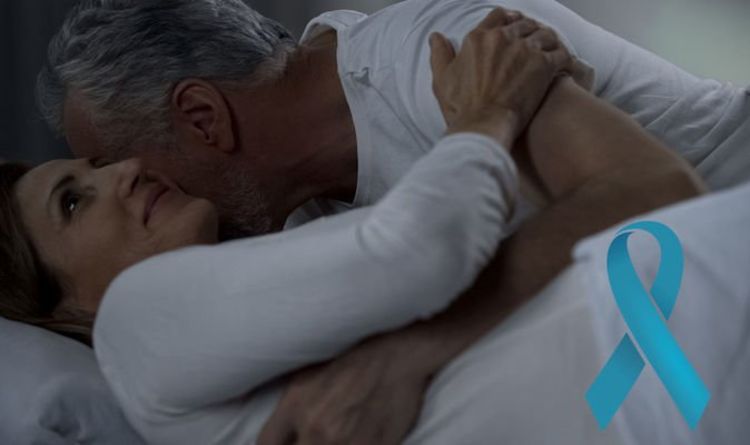 Prostate cancer occurs when cells multiply uncontrollably, forming a tumour, in the prostate gland. And painful sex could indicate you have the disease.

The prostate is a small gland at the base of the bladder.

It surrounds the first part of the tube that carries urine and semen out of the body – otherwise known as the urethra.

Cancer Research UK add: “To cause symptoms, the cancer needs to be big enough to press on the urethra.”

The charity notes the following urinary symptoms could be a sign of prostate cancer. These include:

It’s important to note that the above symptoms can also be due to an enlargement of the prostate gland – a normal development of ageing.

Other symptoms of prostate cancer, as pointed out by the Cleveland Clinic, include blood found in semen or urine, as well as frequent pain or stiffness in the lower back, hips or legs.

Additionally, the chances of developing prostate cancer is much higher if a close relative – such as a brother – has the condition.

Cancer Research UK state that those who have inherited the BRCA2 gene are five times at greater risk of developing the disease.

The NHS adds: “Prostate cancer can be strongly influenced by genes and can run in families.”

If you’ve had a close relative with cancer, the NHS recommends speaking with your GP so that you can be referred to a local genetics service.

The genetics service will determine whether or not you have inherited one of the genes that increase your chances of cancer, including BRCA2.

The NHS would like to stress that a positive result doesn’t mean you have cancer, or that you most definitely will get cancer.

The genetic test only reveals if you’re at a higher risk of developing the disease.

Armed with this information, you can take steps to manage your risk of cancer.

One such step would be to make sure you’re not overweight, with a BMI (Body Mass Index) below 25.

Another would be to eat a healthy, balanced diet and keeping active.