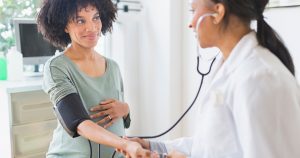 Although it’s relatively uncommon, affecting just 3.4 percent of pregnancies in the U.S. each year, preeclampsia is a complication that can have serious long-term health effects for mom and baby. The condition is characterized primarily by higher-than-normal blood pressure during pregnancy, and may also involve elevated levels of protein in urine and a decrease in blood platelets.

Preeclampsia typically occurs after 20 weeks of pregnancy, about half-way through a woman’s second trimester. Without proper medical attention, it can increase the mother’s risk of organ damage and seizures, among other serious outcomes, and potentially lead to stillbirth.

We spoke with Jennifer Guggenheim, MD, an OBGYN with Presbyterian/St. Luke’s Medical Center, to learn more about the risks and causes of preeclampsia, as well as the treatment options you need to know about.

It’s possible for preeclampsia to develop without any symptoms at all, in which case it will likely be detected only during routine screenings. Although a case of asymptomatic preeclampsia is often less severe than one that presents with symptoms, the condition is progressive, so even mild cases should be closely monitored by a healthcare provider.

Your doctor will track blood pressure throughout your pregnancy. A level that exceeds 140/90 millimeters of mercury (mm Hg) on two different occasions at least four hours apart is considered abnormal and requires attention. Blood pressure readings greater than 120/80 mm Hg may not signal preeclampsia, but they’re not normal for pregnant women, which may prompt your doctor to watch your levels more closely.

Some women with preeclampsia do present with outward symptoms, including:

“For patients who have any of these symptoms, it’s worth calling their physician’s office,” Dr. Guggenheim says. “It’s so much better to call with a concern than to miss something and end up in trouble.”

“It’s not totally clear why some women develop preeclampsia,” Guggenheim says. The cause may have to do with improper development of the placenta, the organ responsible for providing a growing fetus with, blood, oxygen and nutrients. When the blood vessels that supply the placenta are too narrow or don’t function properly, which is common in women with preeclampsia, blood flow to the baby may be limited.

Despite the lack of a definitive cause of preeclampsia, there are factors that predispose women toward the condition. Many of those risk factors are unmodifiable, meaning there isn’t much a woman can do to prevent them, but it’s helpful to be aware of them:

There are also a host of risk factors that are within a woman’s control. “If they already have hypertension,” Guggenheim says, “women should get it under control prior to pregnancy. If they’re overweight, weight loss would be advised.”

It may not be possible to reverse certain conditions, but managing them is a crucial step. If you plan to get pregnant, speak with your healthcare provider about existing conditions like obesity and hypertension, as well as kidney disease and diabetes.

Be Clear about Complications

Preeclampsia poses risk to moms-to-be during and after pregnancy. Although 75 percent of cases of preeclampsia are considered mild and the condition typically subsides six weeks after childbirth, there is still the potential for long-term complications, including brain, kidney and liver damage, organ failure, stroke and heart disease. Eclampsia, which is a condition characterized by seizures, is another potential complication stemming from preeclampsia. Although rare, preeclampsia-related death is possible, and is responsible for an estimated 10 to 15 percent of maternal deaths worldwide.

The baby faces risks too, including impaired growth, preterm delivery and even death. Infants born to mothers with preeclampsia may be at an increased risk of blindness, epilepsy, learning disorders and cerebral palsy.

There’s one sure cure for preeclampsia: delivery. If a woman has carried her child for 37 weeks (or longer) without serious preeclampsia-related symptoms, her doctor will likely induce delivery. Mothers with severe symptoms may be induced after 34 weeks. But if the condition is detected early in the pregnancy, delivery may not be feasible.

“Preeclampsia with severe features is managed differently,” Guggenheim explains. “Those patients are typically hospitalized, and we would deliver them when the risk outweighed the benefits of keeping the patient pregnant.”

If your doctor deems early delivery unsafe, they may recommend bed rest or hospitalization, in which case mother and child can be monitored closely. They may also prescribe medications including blood-pressure lowering drugs, corticosteroids to improve liver and platelet function and promote fetal lung maturation and anticonvulsant medicine to prevent seizures.

Preeclampsia, while generally rare, can pose serious risks to you and your baby. If you suspect a problem, speak with your healthcare provider soon to help ensure your delivery is a happy and healthy one.

Sign up for the latest in health and wellness, news and updates.