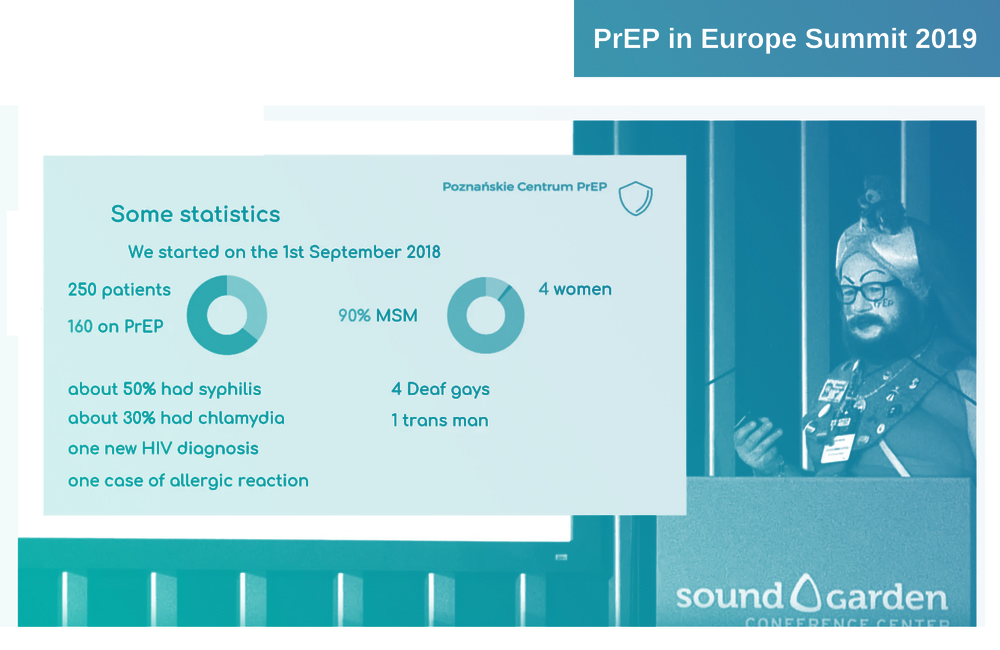 Poland might seem an odd location to hold the recent PrEP in Europe summit, given that it may be the most Catholic country in Europe and is governed by a socially conservative party that is hostile to LGBT rights. Schools do not provide sex education, dedicated sexual health services barely exist and emergency contraception is only available with a doctor’s prescription.

Nonetheless, the meeting heard from several dynamic Polish PrEP activists and clinicians, showing what can be achieved even in such a difficult environment.

PrEP advocacy can be held back in challenging contexts such as Poland by a range of concerns. The LGBT community may be focused on political homophobia and basic rights, rather than PrEP and sexual health. Many existing clinical services may be unwelcoming and stigmatising to minority groups.

When a person is taking more than one drug, and drug A interferes with the functioning of drug B. Blood levels of the drug may be lowered or raised, potentially interfering with effectiveness or making side-effects worse. Also known as a drug-drug interaction.

When a person is taking more than one drug, and drug A interferes with the functioning of drug B. Blood levels of the drug may be lowered or raised, potentially interfering with effectiveness or making side-effects worse. Also known as a drug-drug interaction.

In relation to medicines, a drug manufactured and sold without a brand name, in situations where the original manufacturer’s patent has expired or is not enforced. Generic drugs contain the same active ingredients as branded drugs, and have comparable strength, safety, efficacy and quality.

Breakdown product of creatine phosphate in muscle, usually produced at a fairly constant rate by the body (depending on muscle mass). As a blood test, it is an important indicator of the health of the kidneys because it is an easily measured by-product of muscle metabolism that is excreted unchanged by the kidneys.

There is often a lack of detailed local data, making it hard for activists or policy makers to demonstrate that there is a need for PrEP. Moreover, there may be concern that public discussion which highlights HIV in marginalised groups may further stigmatise them. There can also be worries that raising a demand for PrEP could restrict the supply of antiretrovirals for people with diagnosed HIV (at the moment, there is good access to HIV treatment in Poland).

Dr Bartosz Szetela of Wroclaw Medical University said that the current situation was one of PrEP availability, but not PrEP access. It has been included in the Polish AIDS Society guidelines since 2014, but there is neither a national programme nor reimbursement.

A number of gay or gay-friendly doctors have created clinics that now provide PrEP. These are independent clinics, both in the commercial and non-profit sectors. Szetela estimated that there are currently around 2000 PrEP users in the country (three-quarters using clinics and one quarter buying PrEP online), who are almost all men who have sex with men. However, this is just 3% of his target.

Facilitators of access so far include a website (www.prep.edu.pl) outlining medical guidelines and listing clinics and pharmacies. The tipping point came in 2017 when generic medication (at a monthly cost of €30) supplanted the branded product (monthly cost €800).

One of those clinics was set up in the regional city of Poznań by the activist Paweł Ziemba. It is open one afternoon a week in a rented clinical space. It has been promoted by distributing vouchers for free consultations during outreach at gay clubs and places where people meet for sex, by running PrEP and STI workshops, by collaborating with local community organisations, and by word of mouth recommendations.

When recruiting staff, he said that the clinicians having a ‘common language’ with clients was more important than their medical specialisation. They must have an open attitude and having a sense of humour can also help – Ziemba is a Sister of Perpetual Indulgence and delivered his presentation in a nun’s outfit.

Since the clinic opened a year ago, around 250 people have been seen, of whom 160 are on PrEP. Undiagnosed STIs are very common when patients arrive (about 20% have chlamydia and 40% syphilis), both because the clinic is reaching those at risk and because of the expense of testing for STIs in Poland. User charges at the PrEP clinic include €12 for a doctor’s consultation and €5 for the minimum tests of HIV and kidney function (creatinine). However, testing for six STIs costs a further €72 even though the laboratory provides these at a reduced rate.

The activist Łukasz Sabat outlined his learning from a series of awareness-raising projects over the past two years. He started by putting Polish subtitles onto videos created in the United States by The PrEP Project. They were informative but not adapted to the Polish cultural context and didn’t reach a large audience. Talks in gay bars were well attended and generated good discussion, but were time consuming to organise and difficult to scale up.

Sabat then successfully ran to become Mr Gay Poland in 2018 in order to give PrEP ‘a face’. He shared his personal story in Poland’s leading gay magazine, generating considerable interest and discussion – including hostile and prejudiced reactions. “Poles are not used to talking about sex openly,” he said.

He has since run a series of question and answer sessions on Facebook and Instagram (easy to organise and to repeat, benefiting from personal interaction, but the recordings are not easy to widely share). His most recent project is a YouTube channel for PrEP and sexual health, with original content in Polish, providing short and simple explanations of complex topics, with a light, humorous and sex-positive tone. Producing the videos takes a lot of time but they have been viewed over 40,000 times.

He said that the three main things he has learnt are the importance of being personal (someone the audience can relate to), to brace for the impact of public exposure, and to be ready to interact with people one-to-one.