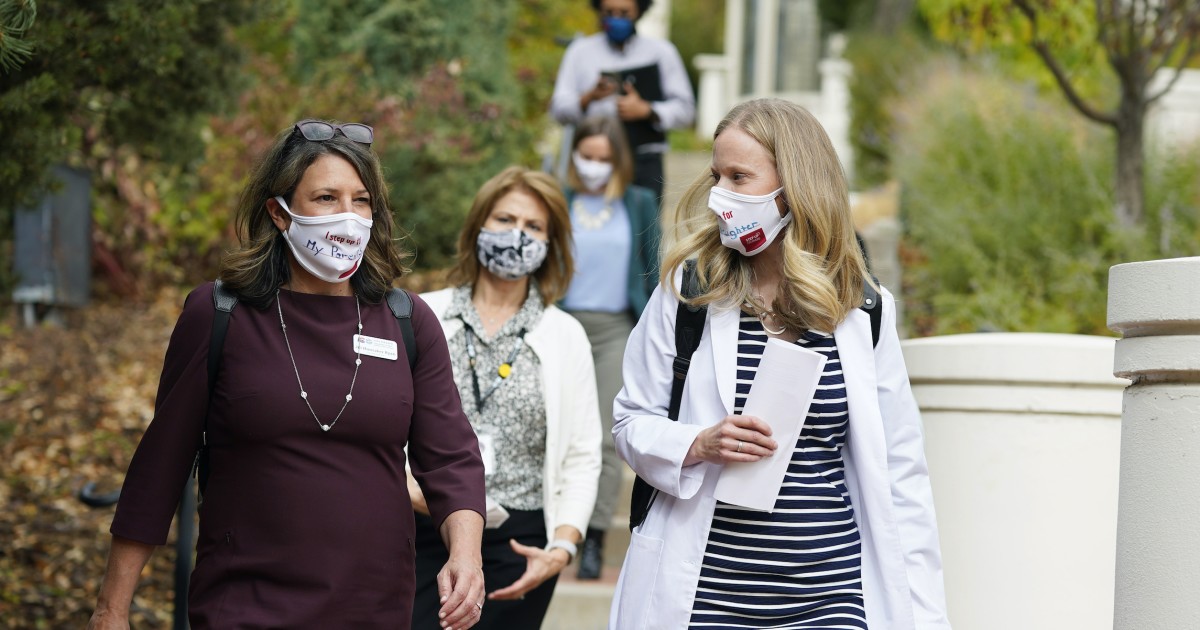 The United States is going deeper into a third surge of coronavirus infections, driven mostly by states in the Midwest that have reported record-high infection rates.

States in the Midwest, such as South Dakota, Wisconsin, and Nevada, have reported skyrocketing test positivity rates. The weekly average rate in South Dakota exceeds 37%, and the rates in Wisconsin and Nevada are about 25% and 46%, respectively.

The weekly average of new daily cases in the U.S. was above 58,300 as of Monday, a level not seen since early August, and is climbing toward the summer peak, with 67,200 new cases on July 22.

Dr. Francis Collins, the head of the National Institutes of Health, attributed the surge to noncompliance with public health guidelines.

“All of this, I’m afraid, happens because we have not succeeded in this country in introducing really effective public health measures,” Collins told NPR’s Morning Edition on Tuesday.

Health experts at the World Health Organization said North America and Europe should follow the lead of countries in Asia, South Asia, and the Western Pacific and lead and keep COVID-19 restrictions in place, Reuters reported. Authorities in Australia, China, Japan, and South Korea successfully quelled outbreaks in the spring by instituting lockdown procedures. Their populations had shown “higher levels of trust” in their governments who had kept up measures longer, according to Mike Ryan, the emergency expert for the WHO’s European region.

“In other words, they ran through the finish line and beyond, and they kept running because they knew the race wasn’t over, that finish line was false. Too many countries have put an imaginary finishing line, and when they cross this, may have decelerated some of their activities,” Ryan said.

The WHO’s Europe division reported that over half of all European countries have seen a 50% rise in cases. To date, more than 40.5 million cases and 1.1 million deaths have been reported globally.

New York Gov. Andrew Cuomo said Tuesday that he would meet with New Jersey Gov. Phil Murphy and Connecticut Gov. Ned Lamont to discuss the rising cases in both states. Despite the increase, New York has kept New Jersey and Connecticut off the list of states under its travel advisory. Cuomo added the talks with other governors would not lead to another round of quarantine measures.

“There is no practical way to quarantine New York from New Jersey and Connecticut,” Cuomo said. “It would have a disastrous effect on the economy. And remember why we’re fighting this public health pandemic or are also fighting to open up the economy.”

Researchers at the Imperial College London, with funding from the British government, will begin purposely infecting young, healthy volunteers with the coronavirus in order to accelerate the process of finding a safe and effective vaccine. Proponents of the experiment said it could be run safely with a controlled amount of the virus. Opponents said that deliberately infecting healthy people with a deadly virus is uncharted bioethical territory, Nature reported.

“Deliberately infecting volunteers with a known human pathogen is never undertaken lightly. However, such studies are enormously informative about a disease,” said Peter Openshaw, an immunologist at Imperial College London and investigator on the study.

The trial will need approval from Britain’s Medicines and Healthcare products Regulatory Agency before enrolling volunteers, and independent experts will monitor the trial when it begins. The research team will first enroll fewer than 100 young, healthy volunteers, the portion of the population least likely to experience severe illness. The findings may not fully apply to the people at greatest risk of severe illness from COVID-19: older people and those with underlying health problems.

The pandemic has left nearly 300,000 more people dead in the U.S. than would be expected in a typical year, with over two-thirds of all excess deaths due to the coronavirus, according to the Centers for Disease Control and Prevention.

The CDC also found that the virus has hit younger adults from 25 to 44 years old especially hard. Their excess death rate is up 26.5% over the rate reported in previous years, the largest change for any age group, and a surprise as the elderly have proven to be the most vulnerable population.

President Trump has not met with the White House Coronavirus Task Force recently, according to Collins. He told NPR on Tuesday that it’s been “quite some time” since Trump met with health experts on the task force, adding that the president primarily is getting his information from Vice President Mike Pence and Dr. Scott Atlas, a former radiologist at Stanford who now advises the president. Atlas, who is not an epidemiologist, appears to have become Trump’s lead adviser. He generated controversy recently when he met with scientists involved with the Great Barrington Declaration, a document that outlines a “herd immunity” strategy for dealing with the pandemic. Many public health experts have been highly critical of the document.

Hawaii reported a 15.1% unemployment rate for September, the highest of all states. The national average was 7.9% last month, the Labor Department reported Tuesday, as coronavirus cases have recently surged in the state.

A majority say Trump is interfering with the coronavirus efforts of the Food and Drug Administration and the CDC.

A recently released Kaiser Family Foundation survey found that, by a margin of 55% to 39%, most respondents think Trump is intervening in the FDA’s review of a coronavirus vaccine. A similar margin of people, 54% to 40%, say he is swaying the CDC as it issues coronavirus guidelines. The poll surveyed 1,207 adults from Oct. 7-12.

The drama in the White House seems to have taken a toll on the trust in the FDA. Sixty-two percent of respondents were either very worried or somewhat worried that the FDA would rush to approve a vaccine.