This story is about something really creepy and disgusting. It is about routinely using people as batteries to power devices.

What comes to my mind is the prospect of an ironic ending to the famous depiction of evolution, the one where the neanderthal gradually turns into a straight-walking modern man, etc. It looks like if our self-appointed global managers with eugenicist tendencies get their way, the next phase of human evolution could be a battery!

A biological battery powering the digitized system of domination! Not a metaphorical battery where the masters get to syphon off people’s life energy and turn it into profits — but a literal battery!

The concept of Human Battery puts the transhumanist slogan about the need to merge with machines — or be left behind in the evolution of the human species — in a sinister context. (Not that the slogan needed any additional context to sound like eugenics. Seriously who are you, Mr. Transhumanist, to consider yourself in charge of human evolution? Who appointed you?) But here is the context: What if “being left behind” means being turned into batteries?

Now, an important philosophical distinction: My indignation is over the scope and the intention of their proposal. If this were merely about a neat little invention, a useful little emergency device that allows you to charge your phone from your body when you are stuck in the middle of nowhere, and your phone has just died — fine, that can be reasonable!

If it were simply about the existence of an emergency device that we could use once in a blue moon, on our terms, when needed, it wouldn’t be a problem. But in the realistic world we are living in, this is going the way of the Matrix! Human batteries are a very “neat” foray into the twisted world of “human capital” and “impact investment,” not to mention good ol’ energy harvesting! To quote my 2020 article about the “Great Reset for Dummies:”

“Let’s talk about “human capital.” In the new world, “human capital” is not just a metaphor for HR or labor. Microsoft, for example, has a patent for a method of transforming human behavior into cryptocurrency, which is done through an unspecified device coupled with a server that registers body activity and “mines” crypto.

Since under the New Normal, digital and crypto are supposed to become mainstream, this looks suspiciously like a tool that can be used both to tightly control the behavior of the poor who may depend on this for income — and to literally mine the bodies of otherwise “useless” welfare dependents / UBI recipients for energy.”

“Furthermore, this patent could potentially be used to create a new financial instrument because, if mined for energy, these people become “assets” that could possibly be bunched together into virtual portfolios and virtually traded. See how neat?

Now, we are talking proper serfdom! And yes, this sounds very sci-fi but let’s not forget how some billionaire “visionaries” think — not like normal people, or else the workers at Amazon warehouses wouldn’t be wearing diapers to skip bathroom breaks. Also let’s not forget that today, there is trading of very theoretical items as well as betting on weather.”

I mean, we shouldn’t be surprised by the intention to abuse us, this is how our civilization has been functioning for a long time. But it doesn’t make our pain today any less!

In their clever and “prophetic” 2015 article, the World Economic Forum “repackages” what sounds a bit like feudalism and makes it sound like a fun activity for the peasants. (It’s easy to be prophetic when you hold the policy makers by the balls! Oops, I said the quiet part out loud, sorry.)

Via tricky language, the WEF narrative transforms our basic human existence and the things we do every day as happy, yokeless people, for our joy and on our own volition — in other words as useless eaters — into potentially useful energy-generating activities, that corporations, the bureaucrats, and the rich investors can exploit.

They subtly reframe the normal things that we do for ourselves — in the manner of “none of your Davos business” — as “human energy powered activities,” an economic area that they can then parasitically tap into (first, with their gentle pinkie, and then with their entire army of bulldozers). Here’s from the horse’s mouth:

“Human power used to be all the rage. 150 years ago [roughly around the time when slavery and serfdom were abolished in both of my homelands, America and Russia?], products that relied on human energy such as the bicycle, pedal-powered lathe or sewing machine could be found in most households [a great exaggeration about the availability of bicycles, but fine]. But as electro-mechanical motors developed, reliance on human-powered products gradually diminished.”

“Today, human power is not appropriately recognised for its potential as an alternative solution to our growing energy needs. Indeed, as we search for more renewable energy sources, is it possible to abandon using traditional electricity for certain tasks and return to human power? [yay, feudalism!]

The way that more and more products are becoming digital and even internet-connected makes this a challenge. But humans emit energy that can easily be harnessed from our everyday behaviour.”

And here is a sweet incentive: “Human-powered products also have the potential to encourage us to become more physically active … Using human-powered products as a countermeasure to our increasingly sedentary lifestyles could create a credible new perspective towards exercise as an alternative energy source.

In some respects, human-power can be seen as the cleanest renewable energy source available, with great potential for helping people stay healthy and have fun.” [Awwww, how about introducing a Ministry of Fun? A human-energy-powered Ministry of Fun? Just a thought.]

The article then talks about a concept, appropriately called, “parasitic harvesting”: “Generating power from people’s normal activities such as walking is known as parasitic harvesting. One example of this in action is … a handheld tube-shaped device that clips to your belt and backpack and generates electricity as you move around, using a magnet weight, spring, and inductive coil.”

What a great idea! Given how subtle our cellular processes are, and how electromagnetic frequencies are such an important language for our bodies, it makes so much sense to walk around with a magnet and inductive coils on our body, while also bathing in the electromagnetic soup from the 5G towers and digital devices!

Sadly, it sounds like they’ve lost their marbles. Either that or, like any literal or metaphorical slave owners, they only care about our well-being to the extent that our well-being impacts their profits.

Are they planning to make everyone so sick that we will all need mothership-reporting medical wearables to keep us alive? Oh … and … sorry … a grandma killer question … what happened to our “fun” and “healthy” physical activity during the lockdown?

“New Wearable Device Turns the Body Into a Battery”

And here is a neat little video from 2021, accompanied by a touching, inspirational soundtrack:

The article, titled, “New wearable device turns the body into a battery” explains the invention further:

“Researchers at CU Boulder have developed a new, low-cost wearable device that transforms the human body into a biological battery. The device, described today in the journal Science Advances, is stretchy enough that you can wear it like a ring, a bracelet or any other accessory that touches your skin. It also taps into a person’s natural heat — employing thermoelectric generators to convert the body’s internal temperature into electricity.”

According to IEEE Digital Library, “not only can wearable devices use vibration energy to charge their own batteries, but they could one day have a big impact on our communities.”

“That’s the conclusion reached by a group of international researchers experimenting with kinetic energy harvesting. The group – comprised of researchers from the University of New South Wales and the University of Queensland – sees potential to use the method as a valuable tool for things like urban planning and development by detecting people’s modes of transportation [emphasis mine].”

From Body Activity to Crypto

Speaking of paying, let’s please revisit the Microsoft patent: Here is the summary: 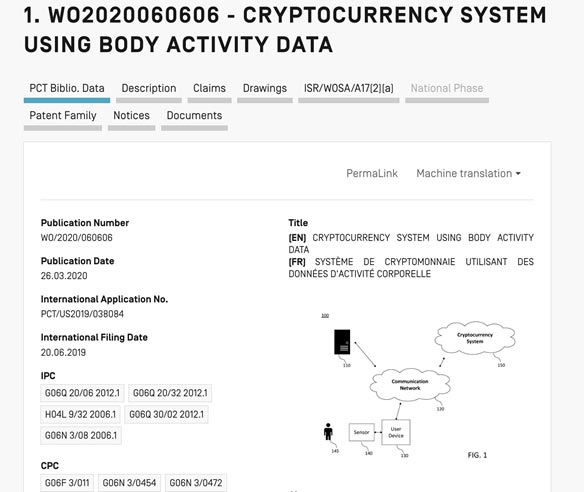 “A virtual currency (also known as a digital currency) is a medium of exchange implemented through the Internet generally, not tied to a specific government-backed “flat” (printed) currency such as the U.S. dollar or the Euro, and typically designed to allow instantaneous transactions and borderless transfer of ownership.

One example of virtual currency is cryptocurrency, wherein cryptography is used to secure transactions and to control the creation of new units …”

“A brain wave or body heat emitted from the user when the user performs the task provided by an information or service provider, such as viewing advertisement or using certain internet services, can be used in the mining process.

Instead of massive computation work required by some conventional cryptocurrency systems, data generated based on the body activity of the user can be a proof-of-work, and therefore, a user can solve the computationally difficult problem unconsciously. Accordingly, certain exemplary embodiments of the present disclosure may reduce computational energy for the mining process as well as make the mining process faster.”

By the way, the word “mining” is very appropriate here. Isn’t it the mechanism that turns vibrant land into wasteland? And will our master care when it happens to our bodies?

An Elephant in a China Shop?

For living beings, electricity is a very important language that our bodies use for internal and external communications, and for many critical functions. Lots been said and written about it but perhaps “The Invisible Rainbow” by Arthur Firstenberg is an excellent starting point.

Modern scientists are babies when it comes to understanding the subtleties of our bodies and our interaction with the world. Why do they assume that the energy that our body emits is a “waste”? How do they know it’s a waste? How do they know that is serves no purpose? Is there such a thing in nature as “waste”? Oh and how long until we are instructed to keep ourselves in shape to be efficient batteries for our feudal masters?

The New Face of the Old Domination System

According to the WEF viewpoint, we are not just living our lives. We produce and spend energy. We don’t just go about our day and do various things because we want to do them. We move around as power generators, as human machines, on a giant conveyor. We must be efficient.

They, the hungry messengers of the spirit of domination, are annoyed with every moment and every inch of our free and independent existence! And of course they have been annoyed with it for centuries — and throughout the centuries, they’ve being abusing different groups of people, with the same existential cruelty, trying to put people to use, without any respect for the spirit. Our independent existence is their lost profits! How dare we!

They don’t want to leave any room for our unmonetized, unmonitored freedom. These people are mental. They are pathetic, anxious, greedy, sorry, mechanical zombies. At the root of it, they are not even scary, just pathetic (although they are capable of creating great carnage, and that’s the scary part about their spiritual illness).

I am not angry, anger is not productive. But I am surely appalled! Their plight is in defiance of how we as human beings are intended to live, in harmony with the spirit, with nature, and with each other. They have really lost their marbles somewhere down the road! They are out of their minds, these messengers of the ghost of domination!

And it’s time to remember that we are the children of spirit and Earth, just like many who came before us and faced the Machine. I, for one, am disgusted with the psychopaths but I am not afraid because we are love, and where there is love, there are no human batteries and no fear.

To find more of Tessa Lena’s work, be sure to check out her bio, Tessa Fights Robots.