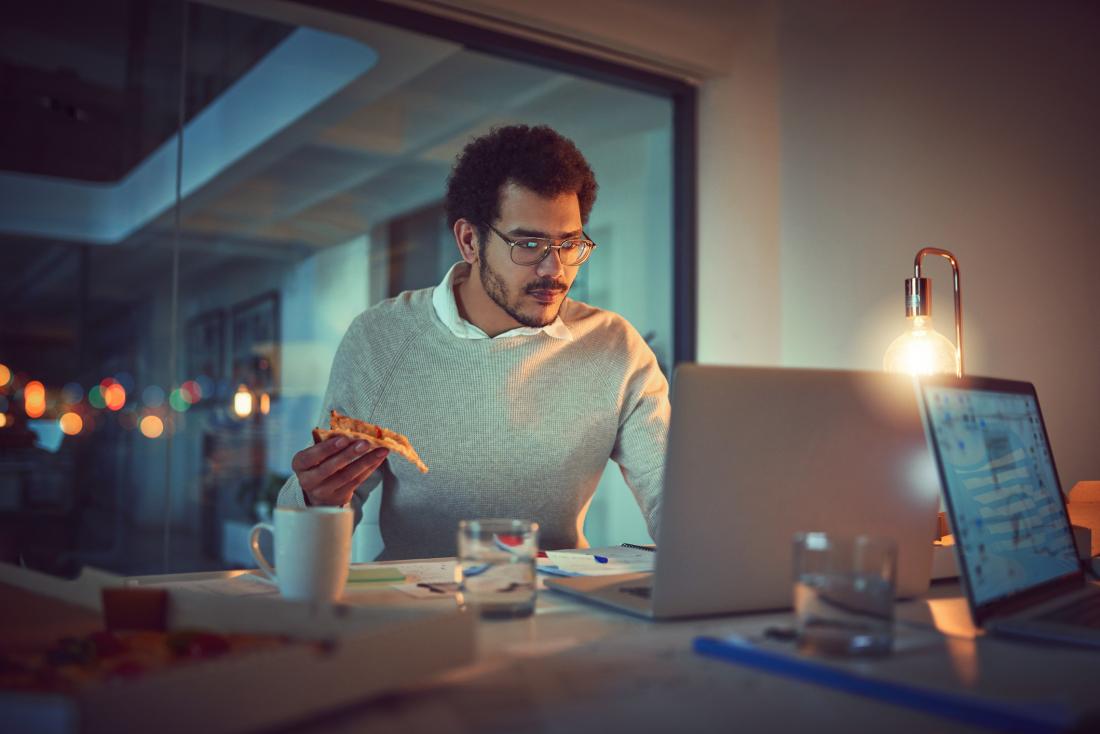 Researchers have long been aware that stress can lead to addiction and increase the risk of disease. Studies have also shown that chronic stress can change eating patterns and affect food choices. Although some people eat less while under stress, most tend to overeat and increase their intake of high-calorie foods.

When stress occurs, the adrenal glands release a hormone called cortisol, which increases appetite and motivates a person to eat, especially foods high in fat, sugar, or both. In combination with high insulin — one of the hormones that control food intake, high cortisol levels are a key factor in so-called stress eating.

Eating patterns vary from person to person, but some research suggests that a person’s biological sex may affect their stress-coping behavior. A Finnish study, which included almost 7,000 adolescents, showed that females were more likely than males to overeat when under stress and had a higher risk of obesity.

Professor Herbert Herzog, head of the Eating Disorders laboratory at the Garvan Institute of Medical Research in Darlinghurst, Australia, recently led a team of researchers conducting a study in mice to understand what controls stress eating. The researchers published their findings in the journal Cell Metabolism.

“This study indicates that we have to be much more conscious about what we’re eating when we’re stressed to avoid a faster development of obesity.”

A part of the brain called the hypothalamus plays the most significant role in controlling food intake, while scientists have implicated the amygdala in emotional processing. In this study, the researchers made a discovery: an insulin-controlled molecular pathway in the brain that may lead to excessive weight gain.

“Our study showed that when stressed over an extended period and high-calorie food was available, mice became obese more quickly than those that consumed the same high-fat food in a stress-free environment,” says Dr. Kenny Chi Kin Ip, lead author of the study.

The molecule at the center of this pathway in the brain is called NPY. The brain produces this molecule naturally during stressful times, and the study showed that NPY stimulates the intake of high-calorie foods in mice.

“We discovered that when we switched off the production of NPY in the amygdala, weight gain was reduced. Without NPY, the weight gain on a high-fat diet with stress was the same as weight gain in the stress-free environment,” explains Dr. Ip.

The researchers analyzed the nerve cells that produced NPY in the amygdala and found that they had receptors for insulin, a hormone that the pancreas produces, which helps the body store and use glucose.

In a stress-free environment, after a meal, the body produces insulin, which is responsible for delivering the glucose from the bloodstream to the cells so that they can use it for fuel. It also signals to the hypothalamus that it is time to stop eating.

By comparing mice under stress with those that were stress-free, the researchers showed that the production of insulin increased only slightly during stressful times. However, when they compared stressed mice on a high-calorie diet with stress-free mice on a normal diet, they found that the levels of this hormone became 10 times higher in the former group.

These high levels of insulin caused the nerve cells in the amygdala to become desensitized to insulin and to boost NPY levels.

The research team was surprised to discover that insulin had such a significant effect on the amygdala. The results show that insulin does not only regulate functions in the peripheral regions of the body, but it may also affect important pathways in the brain. The team hopes to investigate these effects further in the future.