How do genes influence our sexuality? The question has long been fraught with controversy.

An ambitious new study — the largest ever to analyze the genetics of same-sex sexual behavior — found that genetics does play a role, responsible for perhaps a third of the influence on whether someone has same-sex sex. The influence comes not from one gene but many, each with a tiny effect — and the rest of the explanation includes social or environmental factors — making it impossible to use genes to predict someone’s sexuality.

“I hope that the science can be used to educate people a little bit more about how natural and normal same-sex behavior is,” said Benjamin Neale, a geneticist at the Broad Institute of M.I.T. and Harvard and one of the lead researchers on the international team. “It’s written into our genes and it’s part of our environment. This is part of our species and it’s part of who we are.”

The study of nearly half a million people, funded by the National Institutes of Health and other agencies, found differences in the genetic details of same-sex behavior in men and women. The research also suggests the genetics of same-sex sexual behavior shares some correlation with genes involved in some mental health issues and personality traits — although the authors said that overlap could simply reflect the stress of enduring societal prejudice.

Even before its publication Thursday in the journal Science, the study has generated debate and concern, including within the renowned Broad Institute itself. Several scientists who are part of the L.G.B.T.Q. community there said they were worried the findings could give ammunition to people who seek to use science to bolster biases and discrimination against gay people.

“I deeply disagree about publishing this,” said Steven Reilly, a geneticist and postdoctoral researcher who is on the steering committee of the institute’s L.G.B.T.Q. affinity group, Out@Broad. “It seems like something that could easily be misconstrued,” he said, adding, “In a world without any discrimination, understanding human behavior is a noble goal, but we don’t live in that world.”

Discussions between Dr. Neale’s team and colleagues who questioned the research continued for months. Dr. Neale said the team, which included psychologists and sociologists, used suggestions from those colleagues and outside L.G.B.T.Q. groups to clarify wording and highlight caveats.

“I definitely heard from people who were kind of ‘why do this at all,’ and so there was some resistance there,” said Dr. Neale, who is gay. “Personally, I’m still concerned that it’s going to be deliberately misused to advance agendas of hate, but I do believe that the sort of proactive way we’ve approached this and a lot of the community engagement aspects that we’ve tried were important.”

The moment the study was published online Thursday afternoon, the Broad Institute took the unusual step of posting essays by Dr. Reilly and others who raised questions about the ethics, science and social implications of the project.

“As a queer person and a geneticist, I struggle to understand the motivations behind a genome-wide association study for non-heterosexual behavior,” wrote Joe Vitti, a postdoctoral researcher at the Broad Institute, in one essay. “I have yet to see a compelling argument that the potential benefits of this study outweigh its potential harms.”

In a way, the range of opinions by scientists who also identify as L.G.B.T.Q. underscores a central finding of the study: Sexuality is complicated.

The study analyzed the genetic data of 408,000 men and women from a large British database, the U.K. Biobank, who answered extensive health and behavior questions between 2006 and 2010, when they were between the ages of 40 and 69. The researchers also used data from nearly 70,000 customers of the genetic testing service 23andMe, who were 51 years old on average, mostly American, and had answered survey questions about sexual orientation. All were of white European descent, one of several factors that the authors note limit their study’s generalizability. Trans people were not included.

The researchers mainly focused on answers to one question: whether someone ever had sex with a same-sex partner, even once.

A much higher proportion of the 23andMe sample — about 19 percent compared to about 3 percent of the Biobank sample — reported a same-sex sexual experience, a difference possibly related to cultural factors or because the specific 23andMe sexual orientation survey might attract more L.G.B.T.Q. participants.

Despite its limitations, the research was much larger and more varied than previous studies, which generally focused on gay men, often those who were twins or were otherwise related.

“Just the fact that they look at women is hooray,” said Melinda Mills, a professor of sociology at the University of Oxford, who wrote a commentary that Science published alongside the study.

There might be thousands of genes influencing same-sex sexual behavior, each playing a small role, scientists believe. The new study found that all genetic effects likely account for about 32 percent of whether someone will have same-sex sex.

Using a big-data technique called genome-wide association, the researchers estimated that common genetic variants — single-letter differences in DNA sequences — account for between 8 percent and 25 percent of same-sex sexual behavior. The rest of the 32 percent might involve genetic effects they could not measure, they said.

Researchers specifically identified five genetic variants present in people’s full genomes that appear to be involved. Those five comprise less than 1 percent of the genetic influences, they said.

And when the scientists tried to use genetic markers to predict how people in unrelated data sets reported their sexual behavior, it turned out to be too little genetic information to allow such prediction.

“Because we expect the sum of the effects that we observe will vary as a function of society and over time, it will be basically impossible to predict one’s sexual activity or orientation just from genetics,” said Andrea Ganna, the study’s first author, whose affiliations include the Institute of Molecular Medicine in Finland.

While many genetic variants tend to have the same effect in both men and women, Dr. Mills said, two of the five variants the team found were discovered only in males and one was discovered only in females. One of the male variants might be related to sense of smell, which is involved in sexual attraction, the researchers report. The other male variant is associated with male pattern balding and sits near genes involved in male sex determination.

In a finding that could be especially sensitive, the researchers found that whether someone ever engaged in same-sex sexual behavior showed genetic correlations with mental health issues, like major depressive disorder or schizophrenia, and with traits like risk-taking, cannabis use, openness to experience and loneliness.

They emphasized that the study does not suggest that same-sex sexual behavior causes or is caused by these conditions or characteristics, and that depression or bipolar disorder could be fueled by prejudicial social experiences.

“We are particularly worried that people will misrepresent our findings about mental health,” Dr. Neale said.

“That right there is the big issue with looking for the genetics of sexual orientation — social context could be a big part of the expression of the trait,” said Jeremy Yoder, an assistant professor of biology at California State University, Northridge, who is gay and follows genetic research in the field.

Dr. Neale said younger study participants were much more likely than older ones to report same-sex sexual experiences, possibly reflecting increased social acceptance. He and others noted that older participants came of age when homosexual behavior was criminalized in Britain and that for much of their life homosexuality was classified as a psychiatric disorder.

Dr. Reilly and others said such stark differences between older and younger participants show the trickiness of trying to draw representative biological information from a study population so strongly influenced by society’s changing attitudes. People steeped in a culture that demonized same-sex intimacy might only have the gumption to reveal it in a study if they were risk-takers to begin with.

Later, the researchers compared the genetic underpinnings of whether people ever had same-sex sex with their answers to what proportion of same-sex partners they had. They found there was little genetic correlation between answers to the “ever-never” question and whether someone ended up having a bisexual mix of partners, said Dr. Neale, who sees those results as a genetic reflection of the variety of sexual orientations within the expanding alphabet of the L.G.B.T.Q. community.

The researchers also looked at answers to other questions in the 23andMe survey, including people’s sexual identity and what gender they fantasized about. There, they found considerable genetic overlap between those results and whether people ever engaged in same-sex sex, suggesting that these aspects of sexual orientation share common genetics, they said.

Dean Hamer, a former National Institutes of Health scientist who led the first high-profile study identifying a genetic link to being gay in 1993, said he was happy to see such a large research effort.

“Having said that, I’d like to emphasize that it’s not a gay gene study — it’s a study of what makes people have a single same-sex experience or more,” said Dr. Hamer, now an author and filmmaker. The gene he identified was on the X chromosome, one of the sex chromosomes, a location the new study did not flag as being significant for same-sex sexual behavior.

“Of course they didn’t find a gay gene — they weren’t looking for one,” Dr. Hamer said.

Experts widely agree that the research was conducted by first-rate scientists.

“I kind of held my breath when I first saw the study — I thought, oh no,” said Dr. Mills of Oxford. “But it’s the top geneticists and some of the top social scientists in the field working on this, so if somebody was going to do it, I’m glad they did it.”

Indeed, Dr. Neale, who also consults for several pharmaceutical companies, said one reason his team did the study was to ensure less careful researchers would not tackle it first, “given how sensitive and hot-button this topic really is and how personal it is.”

Robbee Wedow, a member of the research team who also belongs to Out@Broad, served as a kind of bridge, organizing meetings between the researchers and their Broad Institute critics.

“I grew up in a highly religious evangelical family,” said Dr. Wedow, a research fellow with the Broad Institute and Harvard’s sociology department. “Being confused about not being attracted to women and being attracted to men, being convinced it was a sin and that I would go to hell.”

For a long time, “I definitely tried to pray it away, tried to like girls, tried to have girlfriends,” he said. “This wasn’t something I, of all people, would have chosen. There must be some sort of biological background.”

He concluded: “Saying ‘sorry, you can’t study this’ reinforces it as something that should be stigmatized.”

Outside L.G.B.T.Q. groups that were consulted did not seem as strongly concerned as some of the Out@Broad members, he said. Zeke Stokes, chief programs officer at GLAAD, who was shown the findings several months ago, said, “Anyone who’s L.G.B.T.Q. knows that their identity is complicated and to have science sort of bear that out is a positive thing.”

Related
Opinion | Steven M. Phelps and Robbee Wedow
What Genetics Is Teaching Us About Sexuality 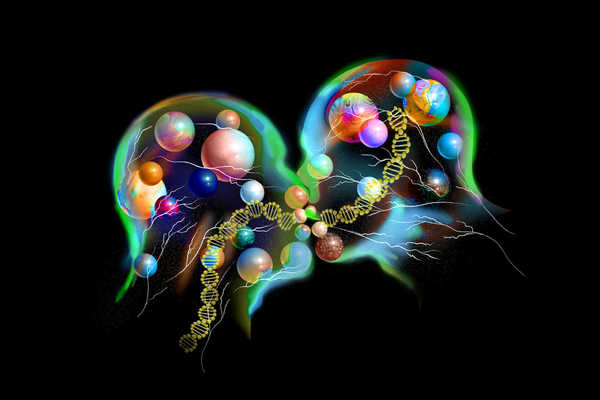