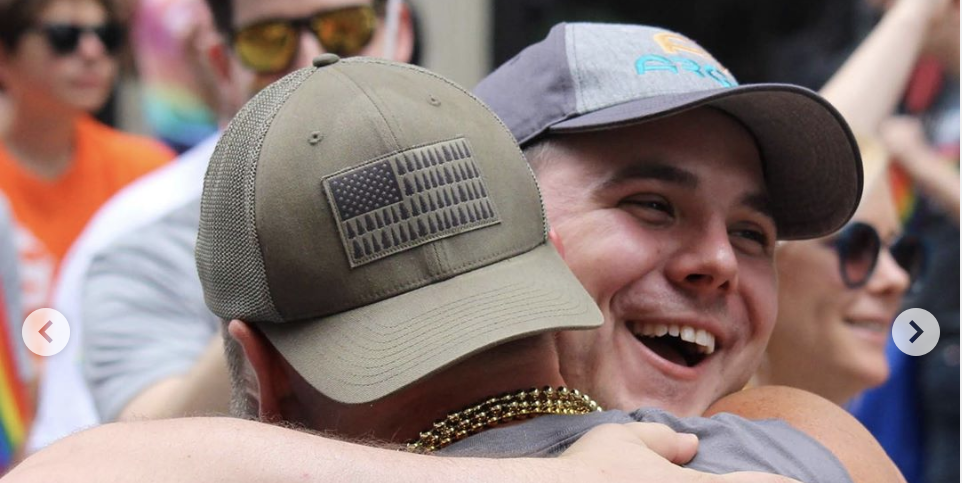 A man found himself going viral this week after attending Pittsburgh Pride, where he offered free “Dad Hugs” to anybody who might want one. Scott “Howie” Dittman decided to tag along to the parade with his friend Denna, who was going with LGBTQ ally organization Free Mom Hugs.

“Taking some time out to make people smile today,” Howie wrote on his Instagram, sharing a photo with the first young woman to accept one of his hugs at the event. “This young girl cried and hugged me for so long.”

Howie told BuzzFeed News about the emotional responses he received from a number of young people. “It was an honor to be involved in that, but it was terrible at the same time,” he said. “”You could tell they hadn’t had something as simple as a hug from their dad in a long time… That broke my heart.”

The sad truth remains that a great many LGBTQ people still find that their biological families are unaccepting of their identities, to the point where a large number are kicked out of their homes. “As a result of family rejection, discrimination, criminalization and a host of other factors, LGBTQ youth represent as much as 40 percent of the homeless youth population,” state research by advocacy group The Trevor Project. “Of that population, studies indicate that as many as 60% are likely to attempt suicide.”

And while a hug might seem like a small thing, such a simple sign of acceptance and affection can make a massive difference to the most vulnerable and marginalized members of the LGBTQ community.

In a Facebook post following the parade, Howie reached out to parents of LGBTQ children and urged them to try to empathize with their situation. “Imagine that, parents,” he wrote. “Imagine that your child feels SO LOST FROM YOU that they sink into the arms of a complete stranger and sob endlessly just because that stranger is wearing a shirt offering hugs from a dad. Think of the depths of their pain. Try to imagine how deep those cuts must be.”

Howie says the post prompted over one thousand people to reply: “”I’ve had so many parents reach out to me saying they’ve been crying for days, saying they’ve been those parents, and they’ve reached out to their children they haven’t talked to in years… How do you even describe the feeling that gives you?”