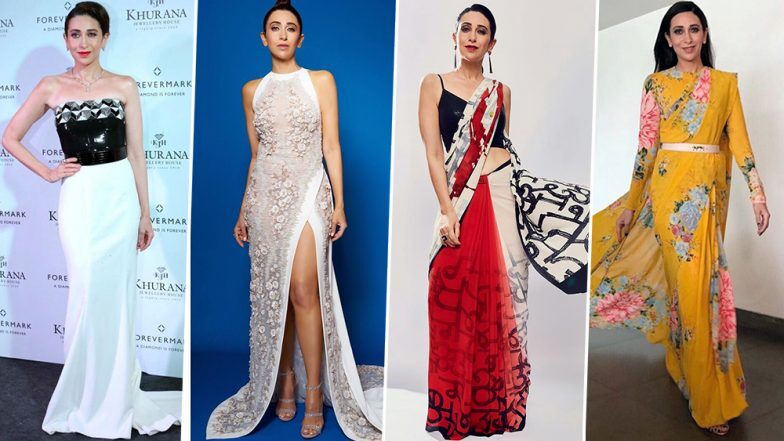 Karisma Kapoor celebrates her 45th birthday today and it’s time we start grooving to  Tan Tana Tan Tan Taara. Bollywood’s first ever fashionista, Lolo was always a step ahead when it came to fashion. She was a style icon of the 90s and nothing much has changed since then. On days when sister Kareena Kapoor Khan isn’t wooing your hearts with her impeccable style file, Karisma is busy ruling them with her ravishing choices. When a stunner like Bebo seeks inspiration from her elder sister, you know the latter knows her game and is damn good at it. Kareena Kapoor Khan and Taimur Enjoy a Lazy Evening with Karisma Kapoor in London (View Pic).

Karisma was always an inspiration to so many. From her mini dresses in the past to her elegant choices in present, her personal style file is as remarkable as her career in B-town. Her fashion choices though conventional, are peculiar in varied ways. From nailing a Sabyasachi Mukherji saree to a monochrome off-shoulder gown by Amit Aggarwal, there’s a rarely a silhouette left that she hasn’t experimented with. We are a fashion devotee and she’s nothing less than a Goddess for us. Though Lolo is missing from the Bollywood scenario for the longest of time now, we’re thankful for she keeps making appearances that are striking and eye-popping.

On that note, let’s quickly go through some of her best sartorial moments from the recent past that we believe will be etched in our minds forever. We admire this Kapoor scion and our love for her cannot be even. 20 Years of Biwi No 1: Karisma Kapoor Shares a Throwback Picture With Salman Khan and It is Full of 90s Nostalgia.

While there are no reports about her Bollywood comeback, she’s gearing up for her debut web series, Mentalhood on ALTBalaji. The actress plays a doting yet crazy mother, Meira Sharma in her first ever web series and we are eager beaver for it. If there’s a thing called a ‘girl crush’ then we have it on her and we believe the reasons for same are justified. Lastly, Happy Birthday Karisma and if you are reading this, we hope you realise how much dote on you.