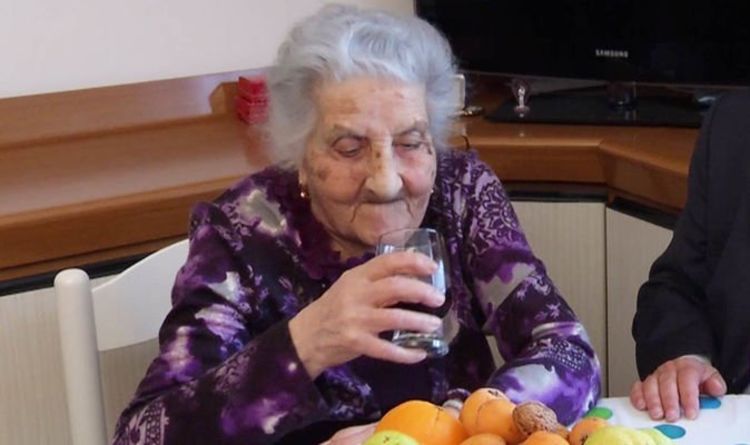 The island of Sardinia is a region of the world dubbed a “Blue Zone” by researcher due to the sheer number of centenarians and supercentenarians that reside there. The average life expectancy on this Italian region is 82 years, with 22 people out of every 100,000 living past 100. Magdalena Sata was one of those lucky few, but she claimed her longevity was achieved by more than just the warm climate.

During the filming of Amazon Prime’s “Steps to the Future” the elderly woman was questioned on how she managed to live for so long.

The narrator revealed in 2004: “Longevity is not only inherited, but lifestyle also plays a very important role.

“A diet based on Mediterranean products explains part of the Sardinian’s longevity.

“Magdalena Sata has just celebrated her 100th birthday and this woman, who is still strong, has had the same diet her entire life.

The presenter went on to reveal one thing Ms Sata would not go without at meal time.

He added: “This red wine – Sardinian wine – every centenarian drinks one glass of it during a meal.

“This wine contains 60 to 70 percent of polyphenol, which is a substance found in plants which protects cells.”

Polyphenols are phytochemicals that have natural antioxidant properties.

While they are present in wine, they can also be found in other foods and drinks such as tea, coffee, chocolate, fruit, vegetables and olive oil.

Polyphenols play an important role in maintaining your health and wellness.

They give foods their vibrant colours and contribute to bitterness, astringency, flavour, aroma, and oxidative stability.

Antioxidants as a group help protect the cells in your body from free radical damage and therefore control the rate at which you age.

If your body does not get adequate protection, free radicals can become rampant, causing your cells to perform poorly.

This can lead to tissue degradation and put you at risk of diseases such as heart disease, cancer, and Alzheimer’s disease, for example.