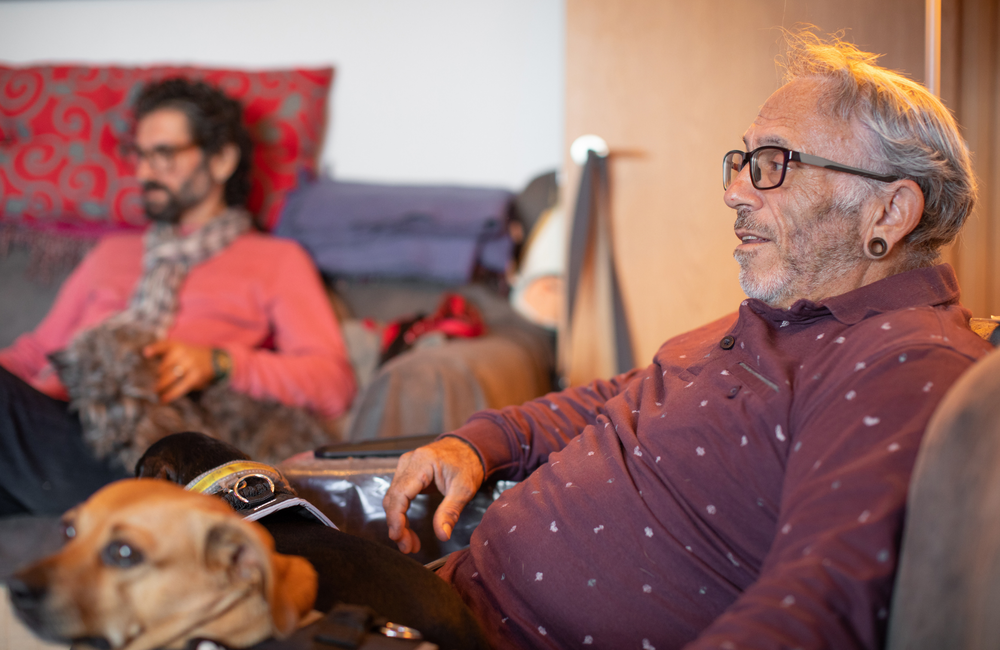 Resources, protective factors and personal strengths contribute towards the development of resilience in middle-aged and older men who have sex with men, according to a recent research report by Dr Renato Liboro and colleagues from the Centre for Addiction and Mental Health in Toronto, Canada.

According to the authors, resilience can be defined as a “positive adaptation within the context of significant adversity,” and can develop at the individual and community levels. Resilience enables individuals to withstand and overcome life challenges, such as living with HIV or being at-risk for acquiring it.

This research focused on the experiences of men who have sex with men (MSM, including transgender men), over the age of 40, to highlight those factors that play a role in the development of resilience as individuals age, both for those living with HIV and those who are HIV-negative.

An umbrella term for people whose gender identity and/or gender expression differs from the sex they were assigned at birth.

Social attitudes that suggest that having a particular illness or being in a particular situation is something to be ashamed of. Stigma can be questioned and challenged.

A person whose gender identity and expression matches the biological sex they were assigned when they were born. A cisgender person is not transgender.

In the language of healthcare, something that happens in a “community setting” or in “the community” occurs outside of a hospital.

The study used a strengths-based approach to better understand how many HIV-positive older individuals have developed resilience to ageing with HIV not only to survive its clinical and social impacts, but also to live full, meaningful lives. Similarly, the researchers interviewed those who have remained HIV-negative despite encountering sexual and social risk factors and living through the height of the epidemic in Toronto.

Interviews were conducted with 55 MSM in Ontario (78% resided in downtown Toronto), aged 40 or older, with an average age of 54. Three-quarters of the participants were living with HIV. Most men identified as gay (78%) and White (49%). Black (16%), Asian (15%) and other racially diverse and immigrant men were also represented in the study. The study included perspectives from three transgender men.

For both HIV-negative MSM and those living with HIV, LGBTQ spaces, community-based organisations (including AIDS service organisations, community clinics and homeless shelters) could be used by men when needed and provided safe, inclusive spaces. These resources were frequently cited as providing essential services, and occasionally as being lifesavers for the men.

Both groups also spoke about the importance of excellent healthcare providers they could easily speak to, such as openly gay or non-judgmental practitioners. Men living with HIV specifically spoke of how reliant they were on these providers. They also spoke of the use of harm reduction services, such as needle-exchange, more frequently than HIV-negative MSM.

“My doctor’s the best! He’s very knowledgeable. He goes out of his way to explain things to me, and he builds me up…”

For immigrants, Canada was viewed as a safe space where sexuality could be openly expressed and necessary services could be easily found. For these men, the country itself was viewed as their main resource for survival.

“In my country, you can be killed for being openly gay!”

Trans participants spoke of the importance of living in downtown Toronto, which provided access to crucial services, including trans-specific services at community sites.

“They have trans-specific training programs at Rainbow Health Ontario. I think that it’s great that they have something specific for us.”

A range of protective factors were identified by men living with HIV as central to developing resilience. These included education, spirituality, family support, long-lasting close friendships and meaningful sexual relationships, as well as their HIV volunteering, activism and advocacy.

“I still have my faith. I go to church and pray regularly… this helps me keep strong!”

Additionally, men living with HIV spoke of serosorting (choosing to have sex only with other men living with HIV, as a way of avoiding rejection) and compartmentalisation (separating their work, family and sex lives so as to avoid disclosing sexual orientation or HIV status) as tools that helped them.

Losing friends and lovers during the first two decades of the epidemic also played a role for several men living with HIV: this contributed to isolation, extreme caution and periods of celibacy which prevented them from acquiring HIV early on and potentially contributed to their survival. Even after their HIV diagnoses, the men spoke of their awareness of co-infections and co-morbidities, largely because of seeing so many loved ones die early on.

Interestingly, men living with HIV spoke of managed substance use as a factor contributing to their resilience. The use of recreational drugs was viewed as a means of coping with the clinical and social impacts of HIV and AIDS and as ‘necessary’ to get through their most difficult times. At the time of the interview, many men were sober and had been substance-free for years. While they acknowledged that other healthier coping strategies would have been preferrable, at the time, substances helped them cope.

“Sounds odd, but without drugs all those years, I may not have lasted this long.”

For HIV-negative men, factors that contributed to resilience included HIV volunteering, meaningful sexual relationships, and losing friends and lovers during the first two decades of the epidemic.

“Having a committed, long-term relationship was the safest way to go!”

“So much death in so little time. I knew I had to get out of the Toronto bath house scene.”

These internal characteristics allowed the men to utilise resources and draw upon protective factors. These included proactiveness, perseverance, having the right attitude, self-awareness and self-control.

For men living with HIV, proactiveness included finding answers to HIV-related questions (either from doctors, online, or from within the LGBTQ community), actively seeking out medications (especially during the early days of the epidemic, when this could mean getting medications from outside Canada), staying on top of medical appointments, and monitoring their laboratory results (CD4 counts, viral loads, STI tests etc). This also extended to persevering and persisting in the face of obstacles, which several men felt was the ultimate factor that saved their lives.

“I took charge of my life… looked after my health… made the right decisions.”

“I just kept carrying on till things eventually got better…”

Mindset and exercising self-control were also viewed as central to developing resilience. This including stopping or limiting alcohol and drug use, as well as being cautious regarding sexual health and STIs.

“You create your own life. It’s knowing what you need to do… making it happen.”

For HIV-negative men, many similar themes came up, with more men citing proactiveness as important. Many men displayed self-awareness by describing how fearful they were of contracting HIV and other STIs and therefore avoided certain venues and sexual activities. They placed a greater emphasis on engaging in what they viewed as safer sex practices in places where they felt safe.

“I’m not into risky sex, not into groups, not into public sex, and not into drugs.”

Trans men expressed how they needed to persevere more than cisgender MSM, as much of the information and services available were geared specifically towards cisgender MSM. Additionally, they expressed awareness regarding their increased risk of physical violence, especially during sexual encounters, and the need to create safe practices, such a private sex parties with clear communication with trusted sex partners.

“I have significant experiences [as a trans man] in different sexual communities. A focus on clarity and clear communication is always key in my engagement with others to secure sexual safety.”

Despite these resources, protective factors and personal strengths, MSM also spoke of significant barriers to the development of resilience in response to HIV. These included problematic substance use, internalized homo- or transphobia, comorbidities, and social ills, such as racism and HIV stigma.

“Party ‘n’ play [sexualised drug use] has major control over the MSM community in Toronto… especially over the newcomers.”

“Gay men would talk as if a man could actually be too gay.”

“I started becoming depressed as I slowly realized how they kept criminalising HIV because of the huge stigma attached to it.”

“As a population that has lived through years of considerable risk or clinical and social impacts of HIV and AIDS, we recognised that the perspectives and lived experiences of our older MSM participants will be able to… inform, influence, and improve healthcare and community-based services, programs, interventions, and policies dedicated to promoting the resilience of both older, as well as younger, MSM to HIV and AIDS,” the authors concluded.