Just in time for your summer holiday! Scientists prove a vacation is GOOD for your health ‘because it cuts your risk of heart disease’

Whether its relaxing on a beach in Mykonos, hiking the Alps or camping at Glastonbury, holidays are something we all look forward to.

And now a study has found getting out of the office or away from the stress of home is good for our hearts.

Scientists discovered the more vacations a person takes over a year, the less likely they are to develop metabolic syndrome.

This is the medical term for a cluster of conditions, such as hypertension and high cholesterol, that together raise your risk of heart disease, stroke and type 2 diabetes.

The study also found that for every holiday a person takes, their risk of metabolic syndrome goes down by a quarter. 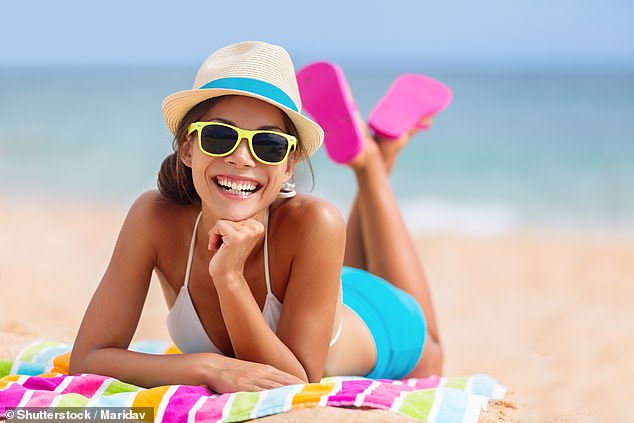 The research was carried out by Syracuse University, New York, and led by Dr Bryce Hruska, assistant professor in the Falk College Department of Public Health.

‘What we found is people who vacation more frequently in the past 12 months have a lowered risk for metabolic syndrome and metabolic symptoms,’ Dr Hruska said.

‘This is important because we are actually seeing a reduction in the risk for cardiovascular disease the more vacationing a person does.

‘Because metabolic symptoms are modifiable, it means they can change or be eliminated.’

Metabolic syndrome is made up of high blood pressure, cholesterol and blood sugar levels, as well as excessive fat around the waist.

It affects up to one in three adults in the US, Mayo Clinic statistics show. And one in four Britons, according to the NHS.

Metabolic syndrome can be prevented or reversed by losing weight, exercising often and quitting smoking. However, how ‘time off’ affects our risk was less well known.

The researchers therefore analysed 63 workers who were eligible for paid holidays.

The employees gave blood samples and had their waist circumferences measured.

Metabolic syndrome was ‘diagnosed’ if the participants had three or more of the following:

The participants were also interviewed about any vacations they had taken over the past year.

In the past 12 months, they enjoyed an average of five breaks and used around two weeks’ worth of their holiday days.

WHAT IS METABOLIC SYNDROME?

Metabolic syndrome is a group of avoidable health issues which combine to raise a person’s risk of developing type 2 diabetes or heart disease or having a stroke.

It is a common condition and around a quarter of UK adults are believed to have it, along with a third of Americans.

Someone may be diagnosed with metabolic syndrome if they have three or more of the following problems:

Metabolic syndrome tends to be caused by a lack of exercise or physical activity or a poor diet.

The illness is not unstoppable and can be prevented or reversed by losing weight, doing regular exercise, eating a healthy diet, and quitting smoking and drinking.

Results – published in the Psychology & Health journal – revealed those who took more vacations had lower rates of metabolic syndrome.

The odds of meeting the syndrome’s criteria was 16 per cent among those who took five vacations a year.

This went up to 46.7 per cent for those who took no holidays.

And for every additional vacation they took, their risk of metabolic syndrome decreased by 24 per cent.

The participants ‘rated vacations positively’. They did not report finding travelling or arranging childcare stressful and had ‘low levels of financial burden associated with vacationing’.

‘Overall, vacations are experienced as positive events,’ the researchers wrote.

The researchers believe holidays let us ‘disengage from work and life’ and ‘spend time with family or share a meal with friends’.

This is significant considering the ‘influential role social relationships have on physical and psychological health’, they add.

Importantly, metabolic syndrome is ‘modifiable’ and could be relieved simply by taking more time off.

‘One of the important takeaways is vacation time is available to nearly 80 per cent of full-time employees, but fewer than half utilise all the time available to them,’ Dr Hruska said.

‘Our research suggests if people use more of this benefit, one that’s already available to them, it would translate into a tangible health benefit.’

The US is the only developed country that does not guarantee paid holiday time to its workers, the researchers wrote.

And among those that do have paid time off, less than half take the days available to them, they add.

In the UK, almost all workers are legally entitled to at least 28 days of paid annual leave, which is the equivalent of 5.6 weeks. An employer can include bank holidays in this.

‘Some thrive on it but, for others, extreme or prolonged stress can prove detrimental to their heart health.

‘Stress may be a trigger for smoking, drinking more alcohol and eating unhealthily, which in turn increases the risk of developing coronary heart disease – the most common cause of a heart attack.

‘Taking time out can be a great way to relieve tension, but you can also talk to friends and family and use your support network to share any troubles.

‘Adopting a healthy diet and getting regular exercise can also help, but it’s important any changes are sustainable and don’t become another source of stress.’