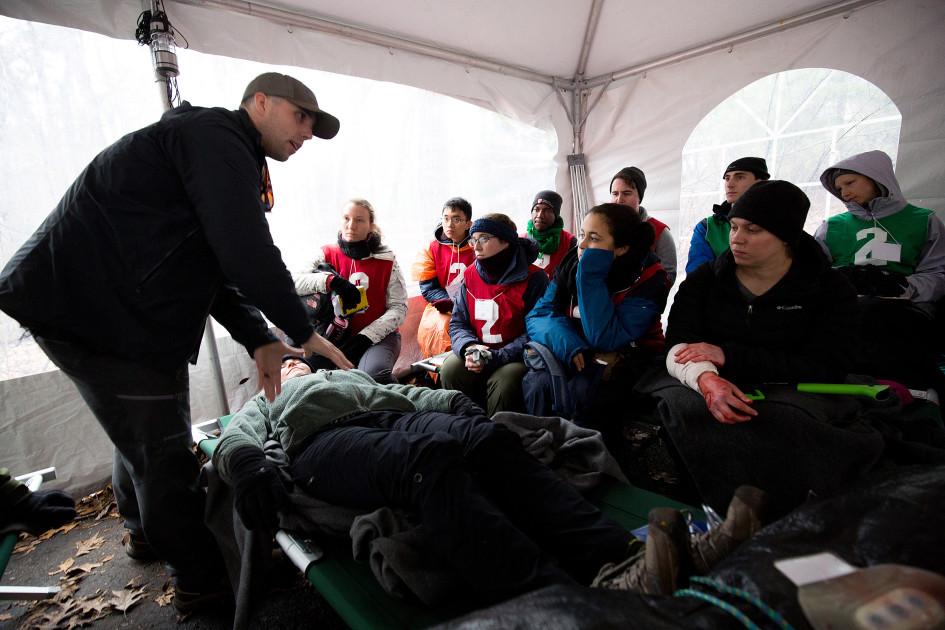 “We have a saying in the simulation: ‘Rain is educational,’” Stephanie Kayden said, considering the cold, wet New England forest around her on a drizzly spring day.

Across the surrounding landscape, 115 students from Harvard, Tufts, and the Massachusetts Institute of Technology were getting a firsthand taste of life as humanitarian aid workers. Divided into 18 teams, they were spread along the roads, lakefront, and trees of Harold Parker State Forest. They interacted with 140 volunteers — some of whom were tasked with giving them a very hard time — who staffed a faux United Nations headquarters, border checkpoints, field hospital, and refugee camps.

“The goal is to put just enough stress on the students so that they know how to do their work under duress,” said Kayden, director of Harvard’s Lavine Family Humanitarian Studies Initiative. “We make them feel what it’s like to really be an aid worker, when they’re cold, stressed, tired, hungry, and running out of time.”

Kayden, who is also an associate professor at Harvard Medical School and at the Harvard T.H. Chan School of Public Health and chief of Brigham and Women’s Hospital’s Division of International Emergency Medicine and Humanitarian Programs, is responsible for overseeing the sprawling simulated disaster that takes over a chunk of the forest in North Andover for a weekend each spring.

This year’s version transported students to the volatile border in the imaginary nation of Worani, where a series of devastating storms have pushed the area’s farmers from their lands. Complicating things is an ongoing conflict in the nation next door that sometimes spills over the border. Organizers emphasize providing as real and immersive an experience as possible, and have designed the weekend to put students off balance, ratchet up stress, and spring at least a few adrenaline-inducing surprises that challenge students to maintain focus and stay on task.

“This is the only way they’ll get experience in a setting like this before they’ll have to do it for real,” Kayden said.

The student teams were playing the roles of well-known aid agencies, such as the International Committee of the Red Cross, Doctors Without Borders, and Save the Children. They interacted with volunteers posing as refugees suffering an array of health and safety concerns. The students’ mission was to discover what had happened, what the people’s needs were, and how best to help. Other volunteers played local residents, officials, or members of the military or a local militia.

Sarah Klem, a master’s of public health student at the Harvard Chan School who was at the simulation, said she became interested in humanitarian work after working on Lesbos, a Greek island just off the Turkish coast that is a stop for refugees on their way to Europe.

“There’s just a lot of need that mostly isn’t talked about,” Klem said. “There’s a lot to do.”