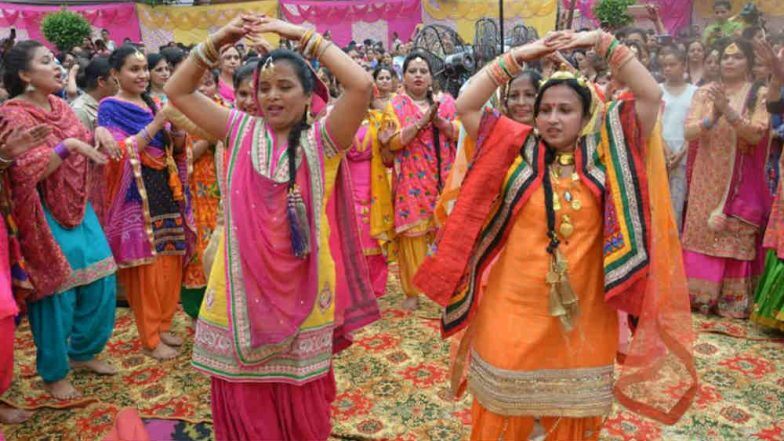 The Hindu calendar month of Sawan has begun and this time around the year, holds a lot of significant festivals. The auspicious month is dedicated to Lord Shiva and Goddess Parvati. Devotees across India are now preparing themselves for Hariyali Teej, the date of which falls on Shukla Paksha Tritiya in Shravana month and is usually observed two days before Nag Panchami. Also known as Choti Teej and Shravana Teej, this year, the auspicious festivity falls on August 3, 2019. Know the significance, celebrations and traditions related to Hariyali Teej 2019. Sawan Shivratri 2019 Date: Know Significance, Puja Vidhi and Muhurat of This Auspicious Day in Month of Shravan.

Hariyali Teej is celebrated on Shukla Paksha Tritiya in the Hindu month of Shravana. According to Drik Panchang, Hariyali Teej 2019 will be celebrated on August 3, 2019, and the Tritiya tithi begins at 1:36 am and ends at 10:06 pm on the same day.

Teej is observed with much enthusiasm by women in the north Indian states, especially in Rajasthan, Uttar Pradesh, Madhya Pradesh, Bihar and Jharkhand. There popular Teej which are celebrated during Sawan and Bhadrapada months of the Hindu calendar namely: Hariyali Teej, Kajari Teej and Hartalika Teej. Hariyali Teej usually falls two days before Nag Panchami. The festival is dedicated to Lord Shiva and Goddess Parvati.

Hariyali Teej is observed to celebrate the reunion of Lord Shiva and Goddess Parvati. Women pray and worship Mata Parvati for marital bliss and happy married life. Women are seen wearing new clothes, preferably green Sari and bangles, visit their parents’ home, prepare swings and use it in pair while singing Teej songs. The tradition also includes parents of the married girl who send Sindhara (a bucket of gifts) to the daughter and her in-laws. It contains homemade sweets, henna, bangles, etc.

Hariyali Teej is one of the significant festivals celebrated in the month of Sawan. Hariyali denotes greenery and represents the green environment as it falls on monsoon season. Women donning in green sarees during the festival is considered auspicious.