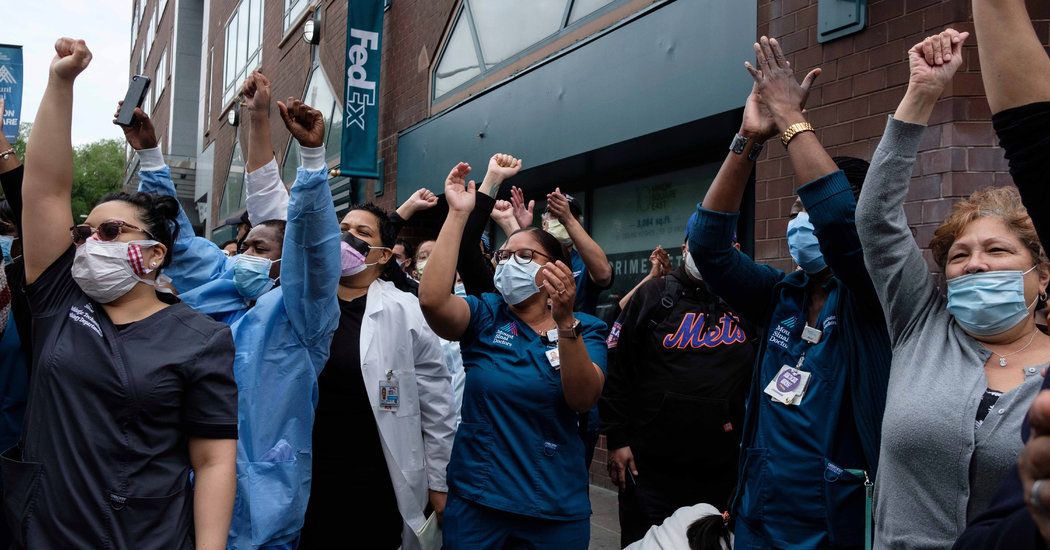 Outside medical centers across the country, doctors and other health care workers have been stopping work in recent days for 8 minutes and 46 seconds to join in protesting the death of George Floyd, who was pinned down by a police officer in Minneapolis for that amount of time before his death.

For doctors in New York who have strained to meet the challenges of coronavirus care for months, participating in the demonstrations has been especially poignant. Workers at a number of the hospitals hit hard by Covid-19 including Bellevue, Downstate, Lincoln, Mount Sinai and Montefiore have held events displaying their support for the protests this week.

Many say they view the deaths of black people at the hands of police as a public health issue. But they also express worries that large gatherings will cause a second wave of Covid-19 cases, and they are balancing their involvement with calls for protesters and police officers to adhere to public health guidelines.

For some black physicians, the protests, like the pandemic, are a reminder of the unequal health risks that black Americans face.

“As a physician, when I hear ‘I can’t breathe’ I’m usually rushing to someone’s bedside,” said Dr. Teresa Smith, an emergency doctor at SUNY Downstate Medical Center in Brooklyn, who thought of her patients with respiratory failure when she saw the video of the killing of Mr. Floyd. “To see George Floyd crying that, that was personal for me as a physician of color.”

To Dr. Smith, these protests are all the more important at a time when a public health crisis is disproportionately affecting black patients. Black Americans comprise 13 percent of the population, but 24 percent of deaths from Covid-19.

In New York City, black and Latino people died at twice the rate of white people, according to data released by the city. A study from the city’s comptroller found that minorities make up 75 percent of the city’s front line workers, and therefore many have not been able to shelter in place.

“The black community has been facing a pandemic that has taken the lives of their family and friends,” Dr. Smith said. “Then the community had to wake up to face the deaths of their people by the hands of those who were supposed to protect them. It’s a double whammy.”

That’s part of what motivated Dr. Rob Gore, an emergency physician, to lead more than 100 residents, medical students and nursing staff in a “die-in” on Thursday at SUNY Downstate. Dr. Gore said the action was intended in part to make medical workers imagine they were personally in Mr. Floyd’s position. As a black physician, Dr. Gore said he wanted his co-workers to understand the fear of police violence as viscerally as they have felt the threat of Covid-19.

Dr. Oluyemi Omotoso, an emergency medicine resident at Lincoln Medical Center in the Bronx, said he could not bring himself to watch the George Floyd video after all the Covid-19 deaths he had witnessed, especially among black patients.

“Seeing clips of it is traumatizing because in the last three months on the front line I kept seeing patients saying they couldn’t breathe,” Dr. Omotoso said. “I remember one shift where five people were intubated and five people died.”

Dr. Omotoso led a solidarity event on Thursday, in which roughly 100 workers at Lincoln Medical Center gathered for a moment of silence and speeches.

But he simultaneously worries that the protests will cause a spike in coronavirus infections.

“The second wave might come sooner than anticipated given what’s happening,” Dr. Omotoso said. “Like most emergency departments in the city, we’re preparing for the worst.”

Some public health experts have also warned that the use of tear gas at protests and other police crowd tactics could increase the risk of coronavirus transmission.

“Arresting peaceful protesters and putting them in paddy wagons increases the risk of transmission,” said Dr. Dara Kass, an emergency room doctor in New York who has spent recent weeks advising patients and colleagues on how to protest safely, and joined a solidarity event at New York Presbyterian. “There’s also no reason to use chemical inhalants that cause people to cough.”

Some physicians have used their involvement in the demonstrations to promote social distancing and ensure that protesters are wearing appropriate protective equipment. Dr. Madison Edens, an emergency medicine resident, said she brought masks to hand out at a protest in Union Square at the end of May, and another gathering for health care workers in Times Square on Tuesday.

Dr. Edens said she feels the role of physicians in the protests is important in a period when people are especially reliant on the expertise of the medical community.

“People are looking to doctors more than they usually do,” she said. “It’s our obligation to stand up and show solidarity even with the risks of gathering at this moment.”

Some physicians say the unity they see at demonstrations has been a comfort after months of seeing patients struggling in isolation, as many hospitals have disallowed or strictly limited visitors during the Covid-19 crisis.

“People have been dying by themselves in the hospital,” said Dr. Hillary Dueñas, a resident physician at Mount Sinai Hospital in New York City, who helped organize the Times Square event. “To see people gather together in silence was so powerful.”