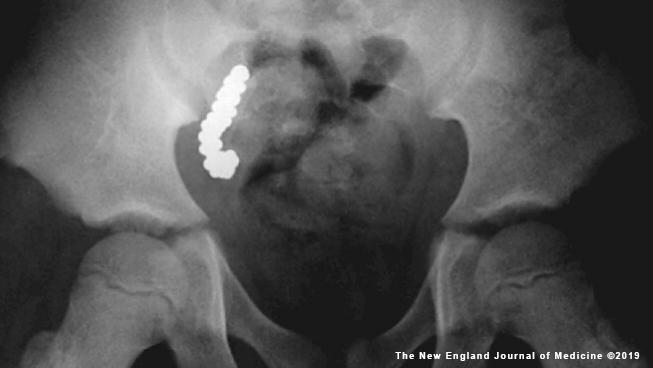 For over two years, an 8-year-old boy from Australia baffled doctors with high concentrations of lead in his body. It started when the unnamed boy complained of a stomachache severe enough to warrant a doctor visit.

Doctors then found over 50 lead pellets trapped inside the boy’s appendix—with no explanation for how the pellets got there from the digestive tract.

However, the physicians didn’t suspect this unusual location right away, according to a LiveScience report.

After identifying foreign objects inside what looked like the boy’s stomach, doctors flushed his digestive system out—but the objects remained unchanged.

The doctors then surgically removed the appendix, finding dozens of lead pellets trapped inside.

The high amounts of lead trapped inside the boy’s body led to symptoms of lead poisoning, including uncharacteristic hyperactivity and lead concentrations of over 5 times more than normal.

The boy’s family regularly ate geese that they killed with shotguns, which could lead to high lead concentrations in itself. However, the boy had swallowed lead pellets while he and his siblings were playing a game with them.

This case was reported in the New England Journal of Medicine in 2013.

According to the Mayo Clinic, a more common source of lead poisoning occurs when children swallow chipped paint from old houses. The U.S. banned lead-based paint in 1978, but some old houses still have this type of paint on the walls.

Other sources of exposure include canned goods, toys or candy from other countries. These countries may not regulate chemicals and products for the lead as heavily as in the U/S. Adults can also be exposed if they work in heavy metals, home improvement or car repair industries.