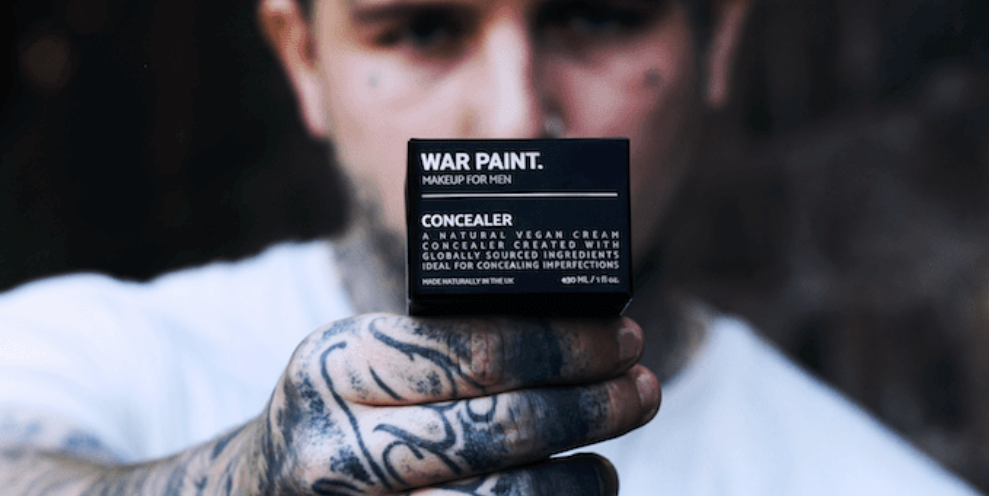 When one twitter user noted that this campaign might appeal to more of “the Axe body spray circa 2000s type” instead of a modern man that’s secure enough with his masculinity to use makeup, the brand responded “Our aim is to allow makeup to be gender neutral and to do that we must have male specific brands also.” This only fueled the fire of outraged Twitter users.

The brand claims the products are specifically tailored to the needs of men’s skin. Cool, cool, but is there even a difference? While a man’s skin is thicker and tends to produce more sebum (sometimes in excess creating oily skin), you can most certainly use the same makeup as a woman does. Stellar ingredients in your skincare routine like glycolic acid help to fight oily skin and break outs, but when it comes to makeup, your skin won’t be damaged by using a concealer that’s used by the female gender to cover imperfections—however, we can’t say you won’t get cooties.

Guys, do we really need a tough Hells Angels biker, burly lumberjack, or a gun-toting cowboy to tell us it’s okay to use a skincare or beauty product if we want to? Haven’t we evolved past this? War Paint clearly thinks not.

On the War Paint website, in a video titled “Our Story,” founder Daniel Gray can be seen running around London, jumping on the London metro, and chatting about his brand that he claims is successfully growing. Absolutely zero products are shown, because again, why would the products be important? More skulls, please.

“I genuinely believe there’s a lot of guys out there, like me, looking for a brand just like War Paint,” says Gray in the video. Based off of the Twitterverse reaction, we’re going to have to call bullsh*t.