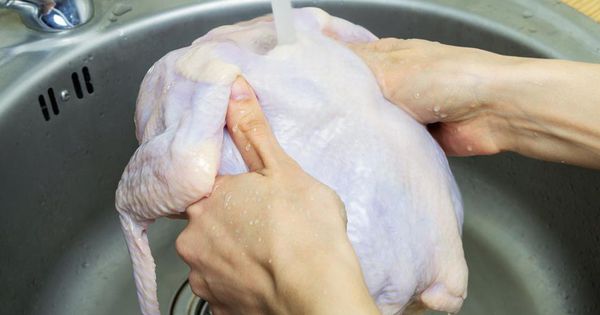 Do not do this. (Photo: Getty Images)

Here’s a difference between raw chicken and your genitals. You should not wash raw chicken.

The Centers for Disease Control and Prevention (CDC) emphasized the dangers of washing raw chicken with the following tweet:

Don’t wash your raw chicken! Washing can spread germs from the chicken to other food or utensils in the kitchen. https://t.co/QlFpd1alG3 pic.twitter.com/bLB1ofcuh7

If you wash raw chicken, you risk creating quite a splash. That would be a splash or perhaps a mist of bacteria such as Campylobacter, Salmonella, and Clostridium perfringens. The trouble is, you can’t then see where this bacteria may go, such as on your counter-top, your utensils, your plates, your other food, or your dog. That’s because bacteria are really, really small, and really, really quiet. They also don’t wear loud clothes. You’d be surprised how far you could fling bacteria by washing raw chicken. If this bacteria goes into your or anyone else’s mouth, you could soon get a nasty surprise.

If you were to spin the raw chicken, bacteria “Wheel of Diarrhea”, you would most likely end up with Campylobacter. The U.S. Food Safety website describes Campylobacter as “one of the most common causes of food poisoning in the United States.” In about two to five days after swallowing the bacteria, you can develop cramps, fever, vomiting, and diarrhea. This can be bloody diarrhea, and not bloody in the U.K. parlance sense, but with actual blood in it. A study published in 2016 in the journal Epidemiology and Infection found poultry to be the most common food behind outbreaks in the U.S., and it wasn’t just a “poultry” or paltry amount. A search of the U.S. Foodborne Disease Outbreak Surveillance System revealed 1114 outbreaks from 1998 to 2012. Of these, poultry was a culprit in 279 or 25% of them. Keep in mind that outbreak reporting does not include single isolated cases. Therefore, the actual number of food poisoning cases is most likely a whole lot higher.

Then there is Salmonella, which I’ve already given you the poop on multiple times. That’s because there were at least 16 reported Salmonella outbreaks last year, as I wrote for Forbes. Salmonella can also mess around with your gastrointestinal tract, but in some can cause potentially deadly complications. For example, Tessa Vanderhart and Austin Grabish reported for CBC News on two deaths from a Salmonella outbreak in Winnipeg, Canada, linked to Celebrate-brand frozen profiteroles and mini chocolate eclairs.

Clostridium perfringens food poisoning ain’t no party, and it ain’t disco, either. Within six to 24 hours, you can begin developing diarrhea and abdominal cramps. While symptoms may be limited to under 24 hours, some, like very young or older folks, can have more severe symptoms lasting for a week or two. This can result in dehydration and further complications.

Therefore, resist the temptation to wash your raw chicken and instead concentrate on washing other things. Besides, why would you wash raw chicken anyway? Unless, you are washing it with hand sanitizer (which you should absolutely not do), you would be doing nothing to get rid of the bacteria. The way to get rid of the bacteria is to cook the chicken to an internal temperature of at least 165°F.  Oh, and make sure that you thoroughly clean anything that has touched the raw chicken.

Of course, there are other differences between raw chicken and your genitals. For example, you typically do not put raw chicken in pants. In life, it is important to be able distinguish when to do what and whom to listen for what. There have been well-known chefs who have advocated for washing raw chicken. But not all chefs are microbiologists or doctors.