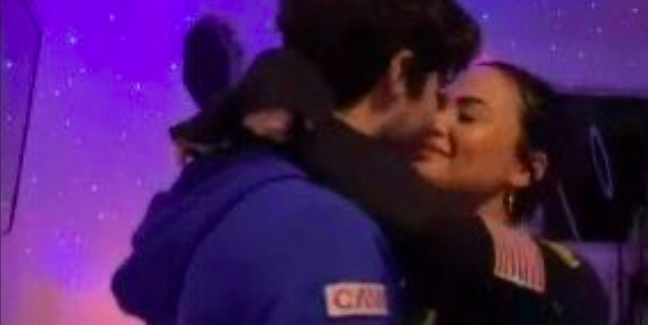 While some celeb couples have broken up during quarantine (see: Kristin Cavallari and Jay Cutler, Cara Delevingne and Ashley Benson), others have been thriving. And thanks to Ariana Grande and Justin Bieber’s new “Stuck With U” music video, we have a little more intel on two of those thriving famous couples, namely Ari and her new boyfriend Dalton Gomez, as well as Demi Lovato and her new boyfriend Max Ehrich.

Demi and Max have only been dating for a few months, and the two have been pretty low-key about their relationship so far (Demi didn’t seem too thrilled when she accidentally walked into Max’s Instagram live in March, supposedly because they were trying to keep things private). However, it looks like Demi and Max were ready to go public, cause they appeared in the “Stuck With U” video, dancing and kissing. Not only that, but on Friday, Demi posted a clip of them in the video along with the caption, “Happy to be a part of something so special right now. Like really REALLY happy if you can’t tell…”

Max also posted the clip from the “Stuck With U” video on his Instagram, captioning, “my whole heart.” Aww!

And even though the two have been all up in each other’s Instagram comments since they started dating, neither has outright said anything about the relationship until just now. These posts also mean that Demi and Max have going Insta official, so congrats to them!