From finding the right bike to practicing your journey first, we’ve listed 10 things every person cycling to work needs to know about ahead of Cycle To Work Day this Thursday (6th August)

There are a plethora of reasons why cycling to work should be your first choice of commute.

Health benefits, saving money, beating the traffic and avoiding the early morning stress of competing for your spot on an overpacked tube or train are all extremely convincing reasons.

But now there’s an even bigger reason to hit the saddle – reducing your risk of contracting covid-19.

With social distancing being the new norm across the globe, cycling as the main mode of transport looks set to sky rocket. Not only that, lockdown meant strict gym closures across the country, causing people to look for a different form of daily exercise and most people chose cycling.

Indeed in May 2020 as a response to the coronavirus crisis, government plans were laid out by the UK’s transport secretary Grant Schapps, pledging £2 billion worth of investment that will ‘create a new era for cycling and walking’.

Even Olympic gold medallist and British Cycling policy advisor Chris Broadman, has sold his car in a bid to show people that a transition from driving to cycling is the way forward.

Due to the surge in popularity, a cycling revolution was imminent. That was until cycling became so popular it led to a worldwide bike shortage.

As bicycle manufacturers struggle to meet the surge in demand, frustrated buyers are said to be on week-long waiting lists with many stores selling out as soon as new bikes are delivered. 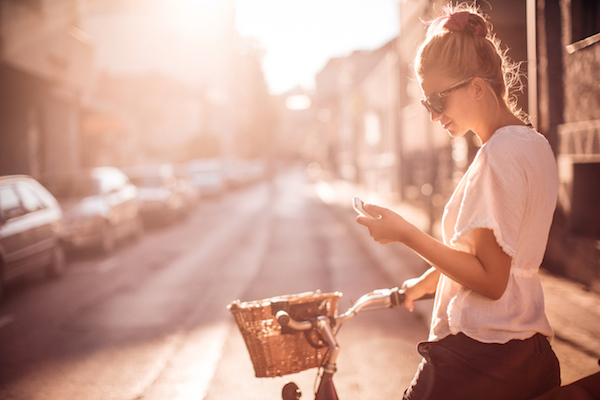 If your old bike is a little worse for wear or if you’re considering cycling to work for the first time – you’ll be one of the thousands looking for a new bike but struggling to find one.

Not to worry though, Healthista has a solution to fix your unsuccessful bike-buying woes, and that brilliant solution is Bikesoup.

Bikesoup is a marketplace for buying and selling bicycles. Simple to sell and simple to buy, Bikesoup sell a huge range of different bikes from road bikes to E-Bikes (electirc bikes) to folding bikes.

Not only is there a vast range to choose from, but there is also a price to suit everyone from affordable prices for those on a budget to high end prices for bike superfans.

Plus, if your someone who has an old bike and could do with some extra cash, why not sell it on Bikesoup? There will never be a demand for bicycles as high as there is right now…

Although the benefits are substantial, knowing these may not be enough to convince you to start cycling to work, especially if you are nervous about trying it for the first time. You may also worry that cycling to work is too dangerous or tiring before spending a long day at the office.

Well, Healthista has put together a list of ten things you need to know, in order to help you decide to ditch the tube and car and opt for a two-wheeler instead…

#1 Cycling to work will reduce risk of covid-19 contagion

As mentioned, the main reason to cycle to work right now is to avoid others and reduce your risk of contracting covid-19. Indeed, the current advice from the Department for Transport is to cycle or walk where possible.

By choosing to cycle to work there will be a greater circulation of air and a smaller risk that you will come into contact with others.

You need to establish what sort of terrain your cycle to work will entail when looking for the right bike for you. Will your journey be flat or hilly? On or off road? Busy or not so busy?

Don’t assume a simple road bike is what you’ll need just because you’ll be cycling on the road. More often than not, road bikes come equipped with thinner wheels rather than thicker wheels (making them more like road racing bikes), which aren’t always suitable for the demands of commuting.

When it comes to E-Bikes, these are recommended for those who live in a hilly area, carry heavy luggage or just need a bit of assistance.

When it comes to E-Bikes, these are recommended for those who live in a hilly area

A major plus with E-bikes is that you can arrive at work without having worked up too much of a sweat before your long day.

Check out Bikesoup to see a varied range of bikes to suit different terrains and commutes into work.

#3 Cycling to work will keep you fit and healthy

Considering current rates, 60 percent of the population will be obese by 2050, so finding a form of exercise that will keep you fit and healthy has become increasingly important.

Cycling is an excellent way to help improve your fitness and lose weight. If you don’t currently exercise on a regular basis, cycling is a great place to start as it is low-impact and adaptable.

Plus where weight loss is concerned, cycling can burn calories at a rate of 400 to 800 calories an hour (depending on weight and speed) making it a great option to trim up and shift a few pounds.

One of the most common reasons for lack of exercise is not having enough time to fit it into you busy day. For those of us who are preoccupied with work, family and social life it can be difficult to find any time at all to exercise.

Cycling to work then, is an excellent way to incorporate exercise into your daily routine. Think about it this way, a short 15 minute cycle to and from work each day would mean you meet the recommended government guidelines for exercise of 150 minutes a week, without even stepping a foot in the gym or waking up at 5am to run a 5K.

What’s more, getting some time outdoors will increase your vitamin D levels which is excellent news for your immune system, brain, bones as well as being protected against numerous diseases and illnesses.

Planning your route the night before is the key to a stress free commute. Be sure to check road closures especially if it impacts cycle lanes.

Be sure to prepare all your gear the night before: kit, shoes, lunch, work bag, lights that are fully charged and dry spare clothes in case you get caught in the rain.

By preparing what you’ll need the night before you’re more likely to just get up and go rather than talking yourself out of it and convincing yourself it will be easier to drive or take the tube. 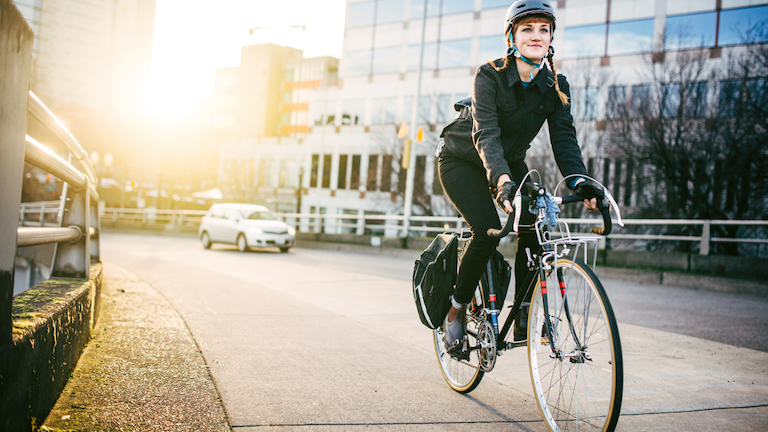 #5 Cycling to work will save you money

Some bikes may be expensive but the cost of maintaining a bike is far lower than petrol and diesel or paying a daily tube or train fare.

With cycling however, your only payouts will be for the bike and your kit. Oh, and one service per year is advisable to keep your bike in safe working order.

#6 Lights are a legal requirement

Lights are not an option, they are a necessity. Not only because they will keep you visible and safe on the roads but they are also a legal requirement.

You MUST have a red rear light and white front light when riding after dusk and before dawn. However, it’s a good idea to use them every time you ride to improve your visibility to others using the roads. Safety first folks.

Ps: be sure to be prepared and charge your lights the night before and at lunch times. 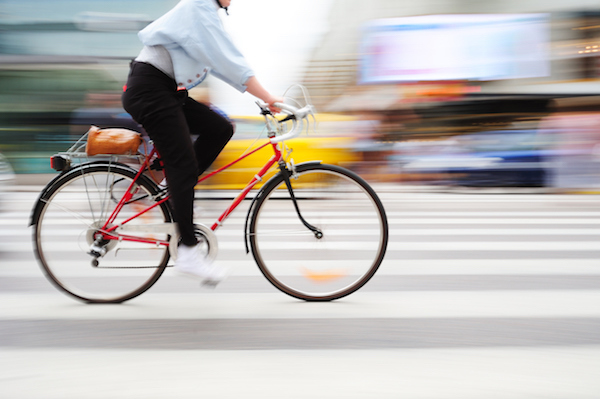 #7 Cycling to work reduces stress and improves your mood

It goes without saying that not being stuck in traffic or being cramped into a stuffy tube will significantly reduce stress levels and improve your mood.

Cycling and exercise in general is a brilliant mood booster. Feel good endorphins, the release of adrenaline and improved confidence after exercise is a great way to start your day.

Not only that, but being outside will increase your time in sunlight which can boost your levels of the feel-good hormone serotonin.

#8 Cycling to work isn’t as dangerous as you think

Despite a not so great reputation surrounding cycling in London, commuting doesn’t actually mean taking your life in your hands every time you go for a ride.

When cycling first became a popular mode of transport, there were a spate of deaths that has seemed to stick in the minds of everyone.

However, because of those deaths, plenty of campaigns and money has led to the installation of dedicated cycle lanes and advertising increasing the recognition and needs of all cyclists in the city.

What’s more, the average speed of cars in central London or most UK cities is actually pretty slow making cycling to work a safer mode of transport.

So fear not. As long as you are confident on the road and communicate with drivers properly, cycle lanes and slower traffic will keep you safe.

Remember these two rules though: never ride down the inside of a truck or bus and always wear a helmet. 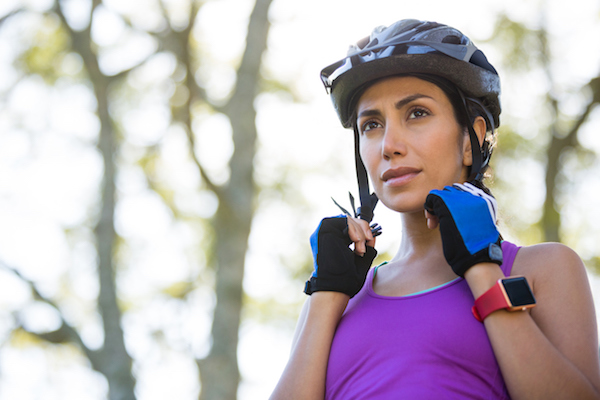 #9 Cycling to work is environmentally friendly

It’s true that using public transport instead of driving to work will cut your emissions by more than half, but why not do even better than that? If you want to reduce your emissions even further (to literally nothing), buy a bike.

In a time where reducing your carbon footprint is so important, cycling to work will contribute to cleaner and healthier air for all Londoner’s, reducing harmful and deadly emissions and ultimately saving lives that are lost to outdoor pollution.

#10 You should practice your journey first if your a beginner

One concern that is common among those who have thought about biking to work is that they are worried about cycling down a specific road or roundabout.

If you don’t feel confident to take on tricky roads and junctions then plan or practice a different route. There are many cycling apps out there and also Google Maps where you can plan a route that is quieter and safer for you to use.

try out a Santander bike and practice in the park

Once you have a route planned, it’s best to have a practice run (or three), preferably at a quieter time such as a weekend. The roads on the weekend are less busy and motorists are usually under less pressure to get to their destination in a certain amount of time.

By practicing the route you will also gauge an estimate for how long your journey will take you, ensuring when you do start your journey into work, you have given yourself plenty of time to get there safely and easily.

If you are really unsure and don’t want to commit to buying a bike until you are, try out a Santander bike and practice in the park prior to making the first move. 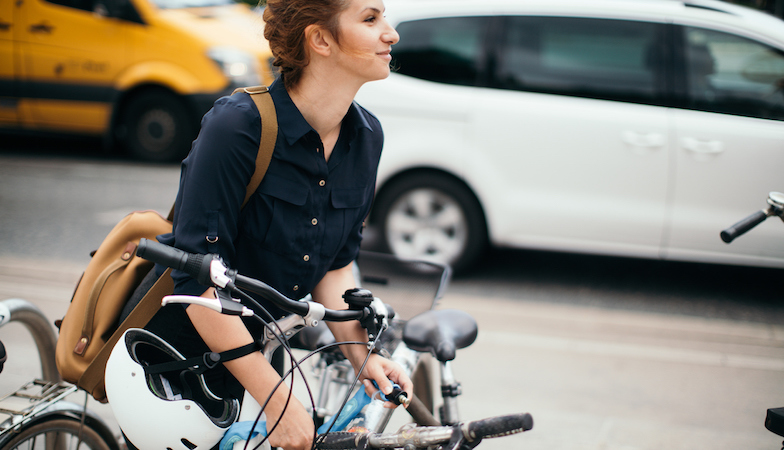 Advice and tips from those at Healthista HQ who cycle:

Do you have a tip for cycling to work? Share your advice with us on Twitter @HealthistaTV

Head over to Bikesoup.com to buy a bike now and avoid manufacturer waiting lists.

The e-bike craze – what could it REALLY do for you?

3 things this TV doctor wants you to know about mood