Curtis Pritchard has opened up about struggling with his body image after being fat-shamed on Love Island.

The dancer is reported to have gained two stone during his stay in the villa over the summer.

He has since signed up as an ambassador for WW, formerly Weight Watchers, to begin a journey to lose the weight he put on.

Soeaking to OK! Magazine, Pritchard said: “I’ve wanted to get a healthy lifestyle because my eating has been up and down all the time.

“I’ve been fat-shamed in the villa, and this and that. Obviously it’s not very nice, it does affect you slightly, and that shouldn’t be happening in this day and age but, it was sort of good for me… it means I can live that healthy lifestyle now.” 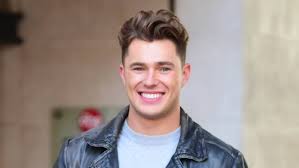 Curtis had reportedly gained two stone in the villa

Pritchard also explains that he feels that men are less talkative about their weight changes than women are.

Pritchard had previously found the fat-shaming “ridiculous” when speaking to the Metro.

“Obviously, coming out of the villa I was fat-shamed by the papers. Can I just say, in 2019, I think this is ridiculous. People shouldn’t be fat-shamed,” he said at the time.