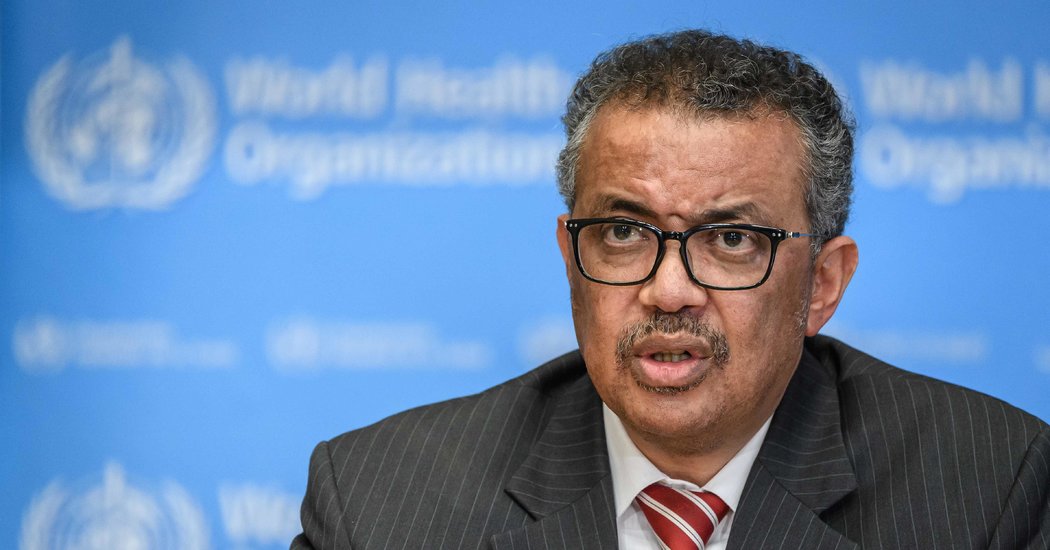 The spread of the coronavirus is now a pandemic, officials at the World Health Organization said on Wednesday.

“We have rung the alarm bell loud and clear,” said Tedros Adhanom Ghebreyesus, the W.H.O.’s director-general.

Dr. Tedros called for countries to learn from one another’s successes, act in unison and help protect one another against a common threat.

“Let’s all look out for each other, because we’re in this together to do the right things with calm and to protect the citizens of the world.”

He pointed several times to the success of China, which has cut new infections from over 3,500 a day in late January to a mere 24 in the most recent daily count. The world is watching to see whether China can keep its numbers down as it gradually releases millions of city dwellers from quarantine and lets them go back to work.

South Korea and Singapore have also begun to see cases drop. But the rest of the world is seeing alarmingly rapid rises.

The W.H.O. is emphatically not suggesting that the world should give up on containment, Dr. Tedros said.

“We are suggesting a blended strategy,” he said, referring to a blend of containment and mitigation. “We should double down. We should be more aggressive.”

Get an informed guide to the global outbreak with our daily coronavirus newsletter.

China, South Korea and Singapore have shown that aggressive contact tracing and rapid isolation of the sick can work. Unlike Western nations, all three rejected the idea of home quarantine, because cases rapidly spread in families.

Some alarmed public health experts have described Beijing’s approach as draconian or brutal, but the W.H.O. has referred to it simply as aggressive.

Wuhan and surrounding cities, the outbreak’s epicenter, have been shut down since late January, and travel elsewhere is strictly limited.

Everyone must wear a mask outdoors and submit to constant temperature checks, which are administered at the doors to every office building, store and restaurant, as well as bus, train and subway stations — even at the entries to apartment houses and residential neighborhoods.

The use of sanitizer or hand-washing on entry is mandatory.

People who think they are infected are screened at special “fever clinics,” not at doctors’ offices. They get temperature checks, flu tests, white blood cell counts, CT lung scans and laboratory tests for the virus, according to Dr. Bruce Aylward, leader of the W.H.O. observer mission that visited China in February.

Anyone who appears to have the new virus, instead of flu or bacterial pneumonia, is held until the lab results are in or while testing is repeated. Some are held at repurposed hotels.

If they are found to be infected, they may not return home — almost 80 percent of infections were within families, studies in China found.

If infected persons are seriously ill or elderly, they are hospitalized. Those with milder cases recuperate in isolation centers with hundreds of beds and nursing care. The centers are segregated by sex and age; even children who are infected must go.

No visitors are allowed, but there activities like dance classes to fight the boredom and keep people active.

As difficult and aggressive as they are, such measures “reduce the number of cases that are wheeled through the doors of hospitals,” said Dr. Michael Ryan, head of the agency’s emergencies program.

The largest number of deaths in China occurred in Wuhan, because its hospitals were overwhelmed in early January, when the authorities were suppressing news of the danger.

The fact that 90 percent of the world’s cases are in four countries — China, Italy, Iran and South Korea — indicates that the pandemic can still be contained if countries act fast, Dr. Tedros said.

The number of cases in the world doubles every six days, epidemiologists have estimated.

The epidemic is thought to have begun with a single infection of a person in Wuhan, presumably by a butchered animal, in mid-November last year. Without any containment measures, it would now be at about one million cases; by the end of April, there would have been over 250 million.

Exactly how many cases were prevented by China’s crackdown is unknown, said Dr. Aylward, “but it’s in the hundreds of thousands.”

The goal of an aggressive containment response, W.H.O. officials explained, is to hold down the number of deaths and critical illnesses until a vaccine can be rolled out, possibly by early next year.

Although declaring a pandemic is largely symbolic, given that the virus has been spreading around the world for weeks, health officials hope the action will raise public awareness of the approaching danger.

Many countries have been slow to prepare, and the W.H.O.’s appeals for funds to help the poorest countries get ready have largely gone unanswered as the world’s wealthiest countries struggle to protect themselves.

Declaring a pandemic does not change what the W.H.O. will do, Dr. Ryan said. It is an effort “to galvanize the world to fight.”

A lot of thought was given to finally using the word, he said, because of the fear that it would cause countries to give up the fight as hopeless.

For many days, when pressed on whether the disease is a pandemic, W.H.O. officials have drawn a distinction between “uncontrolled spread” and “uncontrollable spread.” They argued that China’s thus far successful effort to drive new cases down proved that the global outbreak could be controlled in places even without a vaccine.

Although Dr. Tedros said some countries were not moving fast enough or taking the threat seriously enough, Dr. Ryan declined to name them.

“The W.H.O. does not criticize its member states in public,” he said. “You know who you are.”

Declaring a pandemic has no legal meaning and does not impose any new measures.

On Jan. 30, the W.H.O. declared the virus a public health emergency and said that distinction was more important than whether to call it a pandemic.

Agency officials have often declared themselves frustrated by pressure — which often comes from journalists — to say exactly when a pandemic is officially underway.

After the 2009 pandemic of H1N1 swine flu from Mexico to the Americas to Europe and beyond, the W.H.O. gave up its old definition of a pandemic: “sustained human-to-human transmission of a novel pathogen in two or more W.H.O. regions.”

Journalists quibbled with a W.H.O. media representative over the judgment that the spread in both North America and South America did not qualify as pandemic. (They comprise a single W.H.O. region.) And reporters wondered how many cases in Britain constituted “sustained transmission.”

In February, W.H.O. media representatives said they had given up declaring pandemics so as not to reopen a never-ending discussion.

But the usefulness of the term for raising alarm apparently proved irresistible.

The W.H.O. has sought $ 675 million for the fight against the coronavirus. It has received only $ 100 million in pledges and $ 51 million in cash, according to its website.

Dr. Ryan urged countries to hire thousands more contact-tracers, who find everyone known to have come in contact with an infected person and isolate anyone who may be infected. At the height of its outbreak, the city of Wuhan, China, where the pandemic began, had 18,000 contact-tracers working in teams of five.

Many were government employees who had been reassigned from various government departments and retrained on the job, according to Dr. Bruce Aylward, a W.H.O. assistant director-general who led the agency’s mission to China in February.