Plasma is a booming export business in the US – and in many cases it literally run on the blood of poor Americans.

And the amount of plasma collected in the US has only increased year-over-year, hitting a record high in 2014, according to the latest data from the Plasma Protein Therapeutics Association (PPTA).

Market Watch predicts the blood plasma industry will be worth $ 44 billion by 2024.

Unlike most countries, however, the US pays for plasma, does to limit the number of (paid) donations can be made and collectors and distributors target low-income Americans, according to a report from Mint Press and several studies. 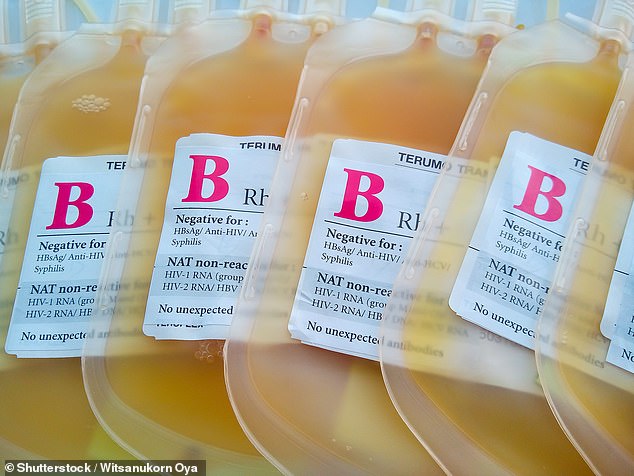 Blood plasma donations have tripled since 1999. Experts and donors themselves claim the increase is driven by poor Americans donating their blood plasma because they face job  instability and collection centers target them with incentives (file)

From the PPTA’s numbers, plasma donations have nearly tripled since 1999 – and it’s not because Americans have become more philanthropic.

But plenty of people are giving more of their bodies.

It may be because, as long as you’re reasonably health and over 110lbs, ‘donation’ centers will pay you to give the plasma for your blood, which is vital to treating immune disorders, clotting and respiratory disorders, and is the base for a number of pharmaceutical treatments.

For a first-time donor, CLS, for example, offers up to $ 400 – depending on ‘location and weight – placed on a debit card that gets reloaded every time a donor gives more plasma.

According to Mint Press, a donor can rake in an average of $ 30-$ 50 per blood draw, and they’re allowed to donate twice a week.

Contrary to common beliefs, the Food and Drug Administration has no prohibitions against paying for whole blood or red blood cells.

It does, however, require that blood that a donation center paid for be labelled accordingly.

Most centers don’t pay for ethical reasons and because the promise of monetary gain might tempt some donors to try to lie about their medical histories to ensure they were eligible to donate blood that then goes to recipients.

All blood is tested for certain diseases and pathogens, including HIV and hepatitis B and C but, the draw process that separates blood plasma from red blood cells – which get returned to the donor – then further divides the plasma into constituent parts.

These become the basis of treatments, so there’s no direct transference of plasma from donor to patient, a safety net against disease transmission.

So donation centers pay, and donors come to collect.

Mint Press’s interviews suggest that they know who will come to donate, too.

‘The centers are never in a good part of town, always somewhere they can get a never ending supply of poor people desperate for that hundred bucks a week,’ Andrew Watkins, who sold his blood in Pittsburgh, Pennsylvania for around 18 months, told Mint Press.

‘The people who show up are a mix of disabled, working poor, homeless, single parents, and college students…this is probably the most reliable income they have.’

Another donor, Rachel, from Wisconsin, told Mint Press that the donation centers incentivize return donations and referrals, even giving ‘bonuses.’

‘They know you are desperate and if you don’t do your $ 30 donation you won’t get your 50 next time,’ she said.

‘Apparently the plasma is worth something in the hundreds, so it is not surprising that you’re screwed over.’

In a Wheaton College talk, Dr Kathryn Edin, a Princeton University sociologist and author of the book $ 2.00 a Day: Living on Almost Nothing, calls plasma donation ‘the lifeblood of the $ 2 a day poor.’

It can come at a cost to donors however.

About 70 percent of the 64 people in a small Case Western University study said they had at least one side effect, most often fatigue, dehydration and soreness.

These might not be considered ‘severe,’ but they may create a vicious cycle: people who are desperate for money turn to plasma collection centers, which pay them to take blood, leaving them weak, and potentially impairing their ability to do other work.

And those without steady work are the lifeblood of the plasma industry, experts say.

‘The massive increase in blood plasma sales is a result of an inadequate and in many places non-existent cash safety net, combined with an unstable labor market,’ Dr H Luke Schaefer of the University of Michigan, who co-wrote $ 2 a Day with Dr Edin, told Mint Press.

‘Our experience is people need the money, that’s the primary reason people show up at plasma centers.’