There’s a burgeoning breakout in one corner of health care.

The IBB biotech ETF has surged 6% over the past week, roughly triple the gains on the broader XLV health care ETF.

Ari Wald, head of technical analysis at Oppenheimer, expects the group to continue to grind higher.

The IBB “had been in this narrowing range for the last year, that is to say it was making both higher lows and lower highs and the action really since the start in November has now resolved itself to the upside, so it’s been a very steep move,” Wald said on CNBC’s “Trading Nation” on Monday. “The expectation should be higher lows, followed by higher highs.” 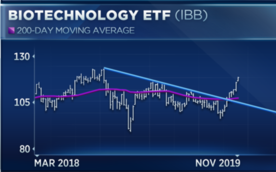 Wald says biotech’s breakout is part of a broader move higher for health care. However, he sees a better way to take advantage of that move.

“We’ve been playing the strength actually more on the managed-care side,” Wald said, pointing to the IHF health care providers ETF. “Very similar breakout in absolute terms. Why this one is really compelling for us is that relative to the market, it’s also breaking higher. It’s put in this bottom versus the S&P, it’s now made a higher high on a relative basis. I think the tide has turned, and that’s why that one really stands out.” 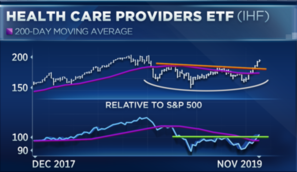 But Bapis cautioned that near-term headwinds from Washington could keep the sector on edge.

“The one negative to it, which will shake out in obviously 12 months, is the political landscape and going into the elections, there’s going to be a lot of talk around this sector. I think we’ll get past it. Short term, pretty positive. Long term I think we’re very positive on the space,” Bapis said.