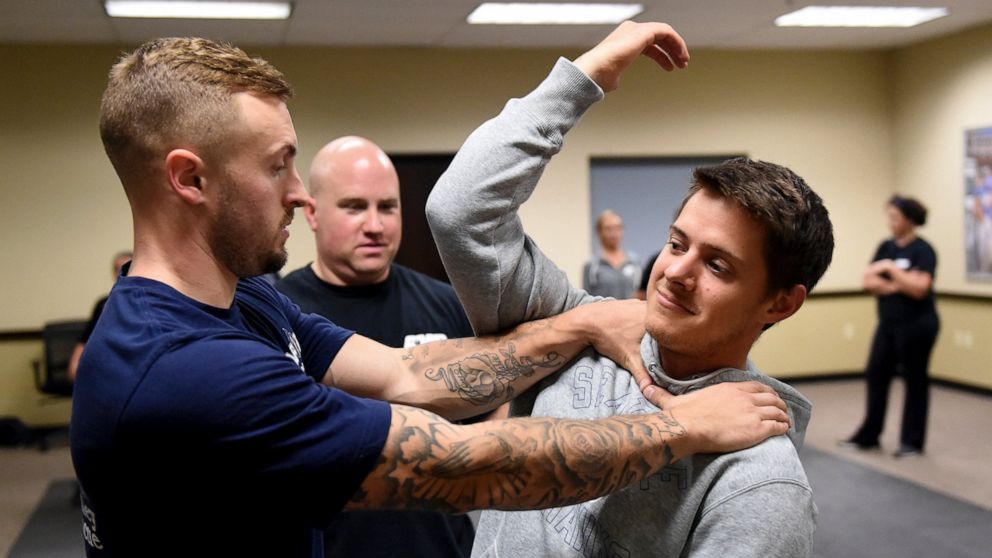 Trisha Preston was transporting a patient in a mental health crisis in the back of her ambulance when suddenly the woman undid her seatbelt, jumped off the gurney and began attacking the veteran paramedic, punching her and pulling her hair. By the time Preston’s partner wrestled the woman to the floor, Preston had a concussion and bite marks on her arms.

“It took me a good couple of months to get it out of my head. I was constantly thinking about it,” Preston said. “We’re all on high alert these days.”

Her experience is part of a rash of attacks in recent months on paramedics in this Pacific Northwest city as they respond to a growing number of 911 calls for patients in mental health or drug-related crises. The uptick in violence is so severe that the private ambulance company that holds Portland’s 911 contract is training more than 500 of its employees in defensive tactics.

The company is trying to better understand what’s happening in the field.

The increase in assaults dovetails with a new policy for the transport of patients in a mental health crisis that grew out of a 2012 federal investigation that found police used excessive force against those with mental illness.

Now, paramedics — not law enforcement — routinely take patients on mental health holds to the hospital, most often to a new psychiatric emergency room created specifically to stabilize those in the throes of a psychiatric crisis. In the past, police transported these patients in the backs of patrol cars, in handcuffs, to traditional emergency rooms less equipped to help them.

The policy puts the city at the forefront of a growing national movement to decriminalize mental health by treating a psychiatric crisis as a medical emergency similar to a heart attack — not as a crime.

“If an ambulance comes to your house and takes you somewhere versus if the police come and take you away, that’s a whole different thing,” Zeller said. “These are medical issues … and when you have an exacerbation, you need the same type of emergency help that you would get if you fell down the stairs.”

For paramedics, however, the shift that began in 2016 has meant a significant change in their daily work.

For the past three years, the ambulance company has seen 911 calls for behavioral health increase 3% to 5% each year, while overall call volume has also increased. Behavioral health calls come with specific challenges, “where we may have a patient who is compliant, calm, easy to work with, and for whatever reason, they turn,” McDonald said.

The policy on ambulance transportation is also paired with a new approach toward handling police calls for those in a mental health or drug-related crisis. Under the settlement with the federal government, Portland now deploys a team of specialized officers who are paired with outreach workers from a local organization called Cascadia Behavioral Healthcare. The force has also given 100 front-line officers enhanced training to address mental health issues that arise on service calls.

“Policing was never set up to have a police officer diagnose and evaluate somebody who’s in mental health crisis. So at least, and with these professionals … it’s in the medical arena,” said Sgt. Brad Yakots, Portland Police Bureau spokesman. “And it’s a better fit.”

Mental health advocates applaud the changes but caution the fallout for paramedics points to a much larger problem with the mental health care system in Oregon and nationwide.

Oregon’s mental hospital is so overcrowded that the state recently was sued for making court-ordered patients languish in jail as they awaited beds. Overall, the state lacks mental health care options that fall between the extremes of going to the emergency room and being institutionalized for weeks or months.

Walk-in options for people who recognize they are in crisis — or headed that way — are almost nonexistent, making paramedics the front-line caregivers when those symptoms reach a crisis point, said Chris Bouneff, executive director of Oregon’s chapter of the National Alliance on Mental Illness.

“People with a mental health diagnosis are much more likely to be the victim of a violent crime (than) the perpetrator. So it’s important to bear that in mind,” said Sarah Radcliffe, a managing attorney at Disability Rights Oregon, which advocates for mental health patients.

At one defensive tactics training, paramedics in sweatpants and sneakers practiced deflecting blows from an instructor who was trying to hit them with padded batons, dodged a fake knife and worked up a sweat wrestling their way out of choke holds. Several described recent scary situations on the job, including a patient who attempted to hijack a moving ambulance.

Tifphany Hofstetter, a lead paramedic, recounted how she had to jump out the side door of her ambulance after her patient unbuckled his seatbelt, crawled to the front seat and wrestled the steering wheel away from her partner.

“He was answering our questions and was redirectable, and then he just kind of snapped all of a sudden,” she said. “He was really close in my face and confrontational and definitely a threat.”

Instructor Jeff Birrer said he’s also noticed more attacks on ambulances from people who are not patients but are at or near a 911 response. The week before, he said, a man threw a rock at his ambulance, and another man pounded on its windows from the outside.

“At some point in time, as a society, we stopped waging a war on poverty. We stopped taking care of people. And as EMTs and paramedics, that’s absolutely what we do. We are the safety net,” he said. “The question is how do we do that and keep the providers safe?”