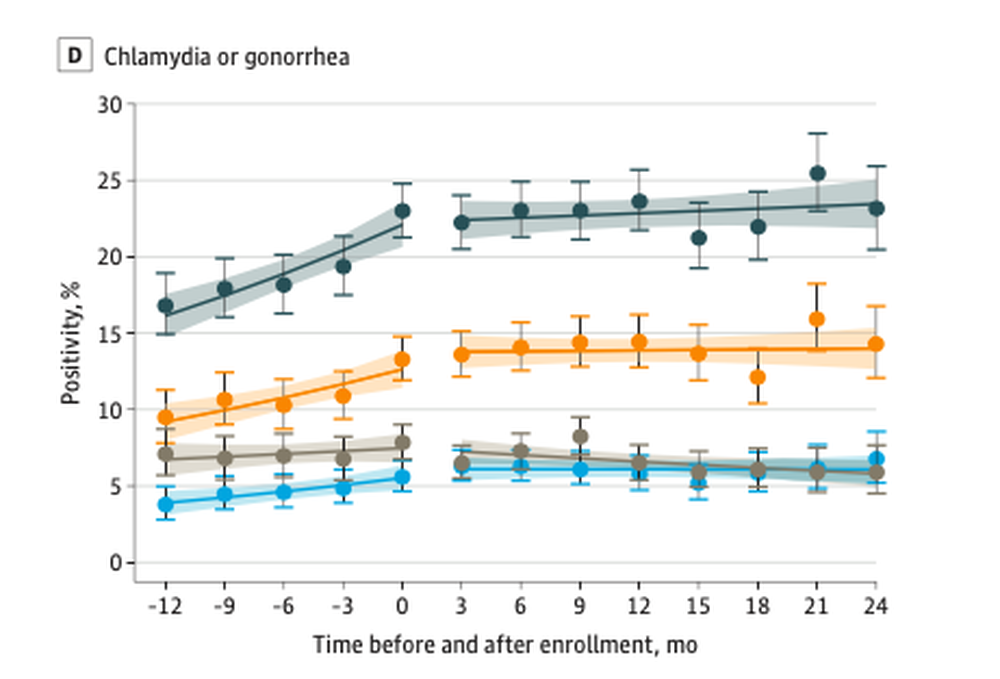 A study of gay and bisexual male participants in the first large implementation study of HIV pre-exposure prophylaxis (PrEP) in Australia has found that although rates of bacterial sexually transmitted infections (STIs) were high, they did not increase in the two years after starting PrEP. In contrast, they increased significantly in the year before men started PrEP.

In the year before PrEP 50% of participants were diagnosed at least once with chlamydia, gonorrhoea or syphilis, and 16% were diagnosed twice or more. In the two years after starting PrEP the annual diagnosis rate was 52% and 20% had two or more diagnoses.

The last part of the large intestine just above the anus.

In everyday language, a general movement upwards or downwards (e.g. every year there are more HIV infections). When discussing statistics, a trend often describes an apparent difference between results that is not statistically significant.

A sexually transmitted infection that can have serious consequences if left untreated. Symptoms include genital or rectal ulcers.

Whether PrEP directly causes gay men to take greater sexual risks and catch more STIs has been a hotly debated question, and different studies and meta-analyses of studies have come to different conclusions. The evidence is summarised in PrEP in Europe’s research briefing.

The largest meta-analysis, which looked at 17 studies covering 4388 participants, found that in the six months starting PrEP, diagnoses of the three STIs did increase, by 24% overall, and by 39% for rectal infections. However, an Australian study found that the STI increases were concentrated among a minority of the highest-risk men and were partly explained by higher rates of STI testing while on PrEP.

Meta-analyses are able to review large sets of data, but their reliability may be affected if the findings of the studies they cover are very heterogeneous or they use different methods. So it is useful to have a quite large study that follows the same group of people throughout.

The present study looked at 2404 out of the 9709 EPIC-NSW participants who had had at least two tests for gonorrhoea and/or chlamydia in the year before they enrolled in EPIC-NSW, and at least one in the two years after enrolment. A smaller number (1228 or 51% of this study’s participants) had also been tested for syphilis using the same criteria. STI diagnoses prior to enrolment were available from a large national database of sexual health and primary care clinics in a sentinel programme called ACCESS.

EPIC-NSW enrolled participants between March 2016 and April 2018: the span of this study stretches from the beginning of the previous year (2015) to the end of 2018. The small number of EPIC-NSW participants who were not men who have sex with men were excluded, as was anyone who had accessed PrEP, even informally, before joining the study.

As already mentioned, in the year before EPIC-NSW enrolment, diagnoses of one or both chlamydia or gonorrhoea increased, from 17% at baseline to 23% during the quarter prior to enrolment. Chlamydia diagnoses increased from 8% to 13%, and gonorrhoea from 10% to 14% (higher than the rate after starting PrEP, though not significantly so). The quarterly rate of increase of diagnoses of gonorrhoea and chlamydia during that year was 8%, and this was statistically significant.

In the two years after starting PrEP, the diagnosis rates stayed more or less steady, at a rate of 22-23% per quarter for diagnosis of chlamydia or gonorrhoea (13-14% for chlamydia and 12% for gonorrhoea).

Syphilis rates did not increase during the whole study, remaining at 2-3% per quarter throughout.

The authors comment that their findings suggest “that previously described increasing incidence of STIs among men taking PrEP mainly reflects a pre-existing increasing trend in STIs in these men.” It is not the only study to find this: a 2017 study from Seattle in the US found rises in all three bacterial STIs in the year prior to starting PrEP. The year after, syphilis rates declined, and gonorrhoea rates stayed flat. Chlamydia did go up, but this may have been due to more STI testing among PrEP users, which could have detected more asymptomatic cases.

The rates of STI tests in the current study did increase after participants started PrEP, from 3.2 tests a year to 4.45. If anything, for reasons similar to the Seattle study, this would tend to increase the number of infections detected after starting PrEP, not before. However, as the authors point out, they selected only the EPIC-NSW participants who had had at least two STI tests in the year before PrEP. This was only a quarter of all participants (and, for syphilis, only an eighth), and these would tend to be those at highest risk already. So we don’t know if STI rates followed a similar trend in the other three-quarters of predominantly lower-risk men.

The lack of any further increase in STI rates during PrEP may be due to there being no further increases in risk behaviour. However, it could also support the argument, advanced by the World Health Organization among others, that frequent STI testing may improve STI detection rates and therefore treatment – and that PrEP could be a catalyst for this.

This finding may seem to contradict recent studies that show that the less common STIs such as LGV and sexually transmitted hepatitis C, previously concentrated among HIV-positive gay and bisexual men, are now more common among HIV-negative men.  This may not reflect a general increase in condomless sex, but a greater willingness to have unprotected sex with men of the opposite HIV status, due to PrEP and awareness of U=U.