By Ben Spencer Medical Correspondent For The Daily Mail

Common antibiotics taken in pregnancy raise the risk of birth defects in babies, a study suggests.

It found macrolides – a group of antibiotics commonly used to treat chest and urinary tract infections – significantly increase the chances of disorders of the heart, genitals and brain.

While most antibiotics, such as penicillin, are safe during pregnancy, the study raises new concerns about the macrolides group, which includes common antibiotics such as erythromycin, clarithromycin and azithromycin.

These treatments have been given to about three per cent of pregnant women in Britain over the past 26 years, according to the study by researchers at University College London.

A total of 31 per cent of mothers take antibiotics during pregnancy, with 21 per cent using penicillin. But macrolides are among the most frequently prescribed for the many women who are allergic to penicillin. 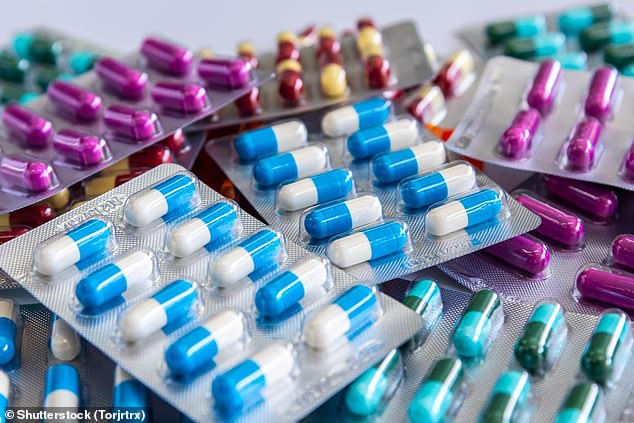 University College London scientists said their findings raised concerns about a type of antibiotic called macrolides, which are used to treat bacterial infections in people who are allergic to penicillin (stock image)

The research team, whose work is published in the British Medical Journal, found babies whose mothers took macrolides in the first trimester of pregnancy were about 55 per cent more likely to be born with a defect than those whose mothers took penicillin.

Some macrolides come with warnings that they should not be taken in pregnancy. But others – including erythromycin, the most commonly used macrolide – are officially listed as ‘not known to be harmful’ in pregnancy.

Researchers used a database of just over 1million children born in the UK from 1990 to 2016, tracked until the age of six. Of those, 105,000 had mothers who had taken macrolides or penicillin during pregnancy.

After adjusting the figures for other factors that could influence the findings, the researchers calculated that 28 in every 1,000 babies whose mothers took macrolides during the first three months of pregnancy developed birth defects.

Macrolides led to a risk 55 per cent greater than for penicillin, which resulted in 18 defects per 1,000 births, roughly the same general risk that any baby will be born with a health defect.

WHAT ARE MACROLIDE ANTIBIOTICS?

Macrolide antibiotics are a type of medication which is very similar to penicillin.

They can perform the same function for many infections and are generally safe for people to take if they are allergic to penicillin.

Macrolides can be used to tackle sexually transmitted infections, skin infections and lung infections like pneumonia.

The main types of macrolides can be identified by their names, which end in ‘mycin’.

Erythromycin, which is used to treat syphilis, chlamydia, urethritis and pneumonia

Azithromycin, which may be used for flu, chlamydia, urethritis, gonorrhoea, typhoid, trachoma and Lyme disease

Clarithromycin, which is used to kill bacteria called Helicobacter pylori, which can cause sores in the stomach

Spiramycin, which is used to treat toxoplasmosis

While the greatest risk was seen in the first trimester, taking macrolides at any point in pregnancy pushed up the risk of birth defects by 23 per cent when compared with penicillin.

Professor Ruth Gilbert, a researcher at the UCL Great Ormond Street Institute of Child Health, said: ‘Our findings suggest it would be better to avoid macrolides during pregnancy if alternative antibiotics can be used.’

But she added: ‘Women should not stop taking antibiotics when needed, as untreated infections are a greater risk to the unborn baby.’

The team stressed that the size of the risk remains very low.

Researcher Heng Fan said: ‘These findings suggest that an additional four children would be born with cardiovascular malformations for every 1,000 children exposed to macrolides instead of penicillin in the first trimester of pregnancy.’

Dr Pat O’Brien, vice-president of the Royal College of Obstetricians and Gynaecologists, said last night: ‘It is important to realise that untreated infections during pregnancy, such as urine and chest infections, can cause harm to both mother and baby, so it’s important that they are treated appropriately.

‘On the basis of the findings of this study, it seems reasonable to be cautious about the use of this type of antibiotic during pregnancy until further research is carried out to clarify whether or not there really is an increased risk.

‘Other antibiotics, such as penicillin, which are safe in pregnancy, are alternatives.’

But he added: ‘In some cases, for example in women allergic to penicillin and where the infecting bacteria are resistant to other antibiotics, erythromycin may be the only suitable antibiotic.

‘In this situation, it seems very likely that the risks of an untreated infection will be greater than the possible risks of using erythromycin.’

But Gino Pecoraro, associate professor at the University of Queensland in Australia, said ‘dredging data’ to look for adverse effects has become a ‘disturbing trend in medical research’.

‘These observational-type studies are not sufficiently powered to prove causation and can unnecessarily fuel anxiety in pregnant women and sometimes even lead to denial of what can be important treatment options,’ he warned.

‘The benefits of using a drug should be weighed against the risks to the mother and developing baby of not providing treatment and where a safer and available alternative exists, that drug should be preferred.’