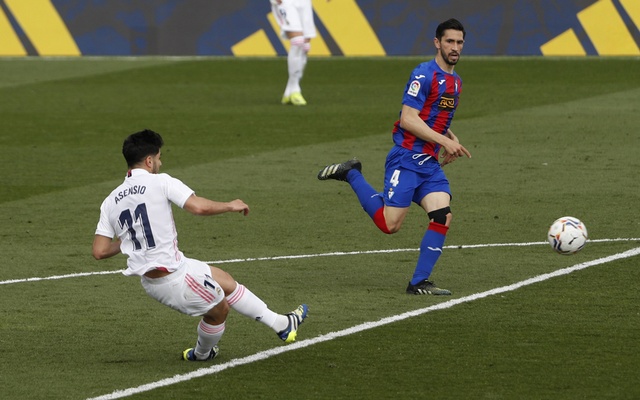 Asensio finally gave Madrid the lead late in the 41st minute after his side had two goals ruled out for offside, latching on to a Casemiro through ball and curling his effort into the bottom corner despite losing his footing as he took the shot.

After controlling the first half, Real struggled for a long spell in the second as torrential rain poured down on the Alfredo di Stefano stadium and goalkeeper Thibaut Courtois almost committed a howler when he miscontrolled a backpass from Lucas Vazquez but managed to kick the ball away just before it crossed the line.

Real then had a goal ruled out for offside for the third time but eventually got the all-important second goal when Benzema headed home a cross from Vinicius Jr. in the 73rd minute.

“We could have killed the game off earlier than we did but we still played well overall and created a lot of chances.”

A third consecutive league win lifted Zinedine Zidane’s side to second in the standings with 63 points, one point above Barcelona. Leaders Atletico, who visit Sevilla on Sunday, are on 66.

With an eye on the quarter-final first leg at home to Liverpool, Zidane shuffled his squad to rest defender Raphael Varane while starting without Toni Kroos and Vinicius, handing rare starts to Marcelo and Isco.

Sergio Ramos missed out after picking up an injury on international duty and is set to miss both games against Liverpool as well as next weekend’s ‘Clasico’ at home to Barcelona.

Real made a bright start and should have taken the lead when an Eibar defensive mishap led to the ball falling at the feet of Benzema, giving him a free run at goal. But the French striker could not dribble past keeper Marko Dmitrovic.

Benzema later had a goal ruled offside while Asensio had the ball in the net soon after with a delightful backheel but his strike was also chalked off.

Asensio quickly overcame the setback to break the deadlock while Benzema joined him on the scoresheet in the second half, netting for the seventh game in a row in all competitions.

“Today we made a few changes but it didn’t affect us at all, we went for the game from the start and in the first half we were spectacular,” said Zidane.

“The second half was different because of the storm and we had 20 difficult minutes until we scored the second goal. Now we have to rest well because we have a busy week ahead.”