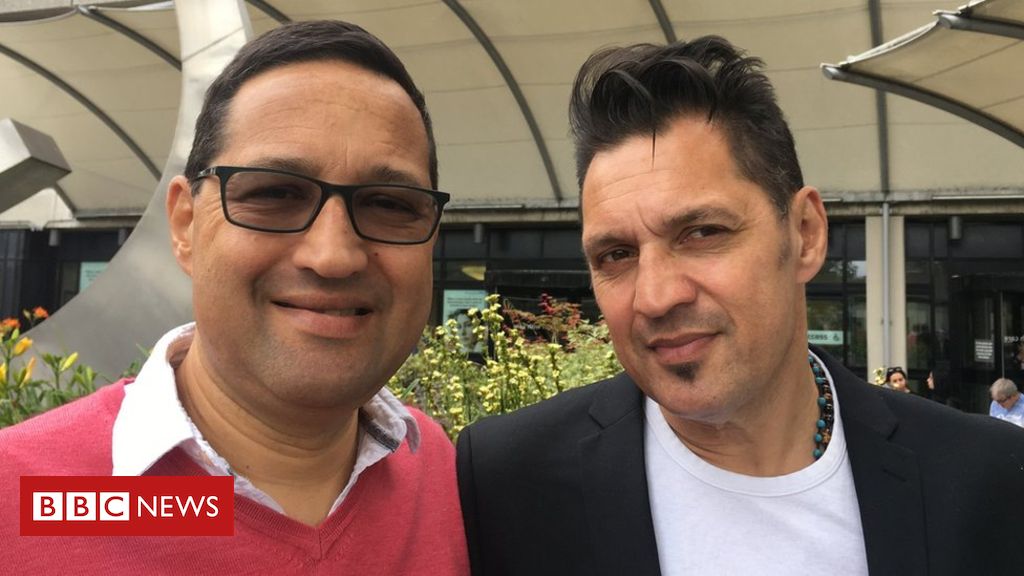 A new form of medicine called “gene-silencing” has been approved for use by the NHS in England.

The drugs will be used to reverse a disease called amyloidosis, which causes nerve and organ damage. It can be fatal.

Vince Nicholas, whose twin brother and mother both died from the disease, says the therapies are giving him hope.

Doctors say gene-silencing is making the “previously untreatable, treatable” and has huge potential in medicine.

How bad is amyloidosis?

“My mum had five siblings and they all died of it. There are five of us, three of us have it and one has died.”

The disease is passed down through families and there is a fifty-fifty chance that children of affected people will develop the disease.

The first signs of Vincent’s disease were pins and needles in his hands and feet.

“You lose that very gradually and then suddenly it all goes.

“My legs are numb from my knee down and it was going to my hands as well.”

Eventually patients end up needing a wheel chair. It can affect eyesight, dangerously weaken the heart and cause chronic pain.

There are different forms of amyloidosis and the Nicholas family have hereditary transthyretin-mediated amyloidosis.

They have a “rogue gene” that leads to the build-up of sticky, toxic proteins in the body.

The protein, called transthyretin, is made by the liver and damages organs and nerves.

It can be fatal within three to 15 years of symptoms first developing.

It affects about 150 people in the UK.

How does the treatment work?

A gene is part of our DNA that contains the blueprint for making proteins, such as hormones, enzymes or raw building materials.

But our DNA is locked away inside a cell’s nucleus and kept apart from a cell’s protein-making factories.

So our bodies use a short strand of genetic code, called messenger RNA, to bridge the gap and carry the instructions.

This drug, called patisiran, kills the messenger in a process known as RNA interference.

This effectively silences the rogue transthyretin gene and lowers levels of the toxic protein in the body.

Patisiran is the first treatment of its type to be approved. A couple of weeks ago, inotersen was also approved for this disease and it uses a different approach to disable the messenger RNA.

How big is the impact?

Studies, published in the New England Journal of Medicine, showed patisiran “halted or reversed” the disease.

Carlos Heras-Palou, a surgeon at the Royal Derby Hospital, was on the trial and said the drug had saved his career.

“This is making a disease that was previously untreatable, treatable,” Prof Julian Gillmore, from the Royal Free hospital in London, told the BBC.

“I’ve been watching these patients get worse for 25 years, I know families that have been devastated by this disease.

“This has the potential to change that, it’s amazing, it’s exciting.”

What about patients in the rest of the UK?

These decisions are devolved to the respective health bodies in England, Scotland, Wales and Northern Ireland.

The National Institute for Health and Care Excellence, which makes decisions for England, said the treatment was “unique and innovative”.

The drug was approved by the Scottish Medicines Consortium a couple of weeks ago.

What other diseases could gene-silencing work in?

The discovery of RNA interference won the Nobel Prize for Medicine in 2006, but its journey from pure science to medicine has been long.

But studies have shown the drug works in other genetic diseases that run in families such as porphyria.

And an experimental drug showed the defect that causes the neurodegenerative disease Huntington’s has been corrected with gene-silencing in early stage research.

Prof Gillmore said: “This [amyloidosis] is probably the first of many potential diseases that will be treated by gene-silencing.

“This has very far-reaching potential consequences, it has a huge potential.”

There are also suggestions gene-silencing could tackle dangerously high levels of cholesterol that runs in families and other neurodegenerative diseases such as Parkinson’s or Alzheimer’s, although this is research is the early stages.

What’s the reaction been?

Dr Heras-Palou, from the ATTR Amyloidosis Patients’ Association, said: “Today’s announcement has the potential to change the lives of families across the UK who are affected by this cruel disease, offering them an option that could reduce the burden of symptoms that can be crippling to many.”