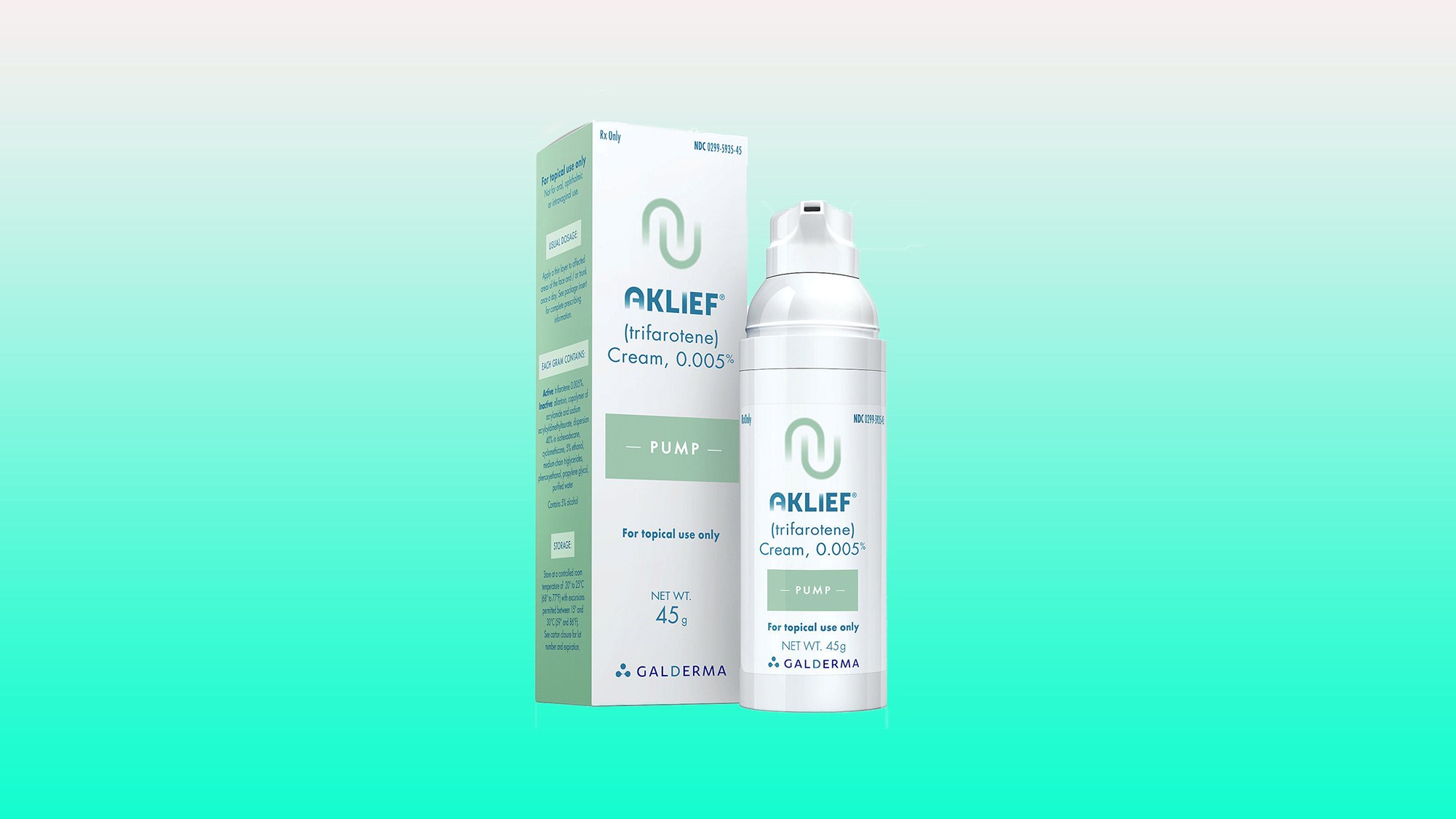 Usually, when we talk about retinoids gaining approval by the Food and Drug Administration, we’re talking about different formulations or strengths of a certain retinoid, or a retinoid that’s gained approval to be used on a different part of the body. The FDA approval of a new topical called Aklief, however, is totally different — because it’s a new retinoid altogether. In fact, it’s the first new retinoid molecule to be approved by the FDA in more than 20 years(!).

But let’s back up a bit. Aklief is the brand name for a topical cream that contains a molecule called trifarotene, which is the first new retinoid to hit the market in two decades. Quick reminder that retinoid is the umbrella term for all retinol-containing products.

We first reported about trifarotene in 2018, when a study was published in the British Journal of Dermatology that outlined its benefits, basically touting it as having the same benefits you’d hope for from a retinoid (clearer skin, exfoliation, etc.) with potentially fewer side effects (irritation, peeling, etc.). Now, as of a few days ago, the molecule has gained FDA approval in the form of Aklief, a topical cream that’s approved to treat acne on the face and the trunk, which includes the chest, back, and shoulders.

“The product was designed specifically to make it suitable for use across large areas,” Chris Chapman, vice president and general manager U.S. prescription at Galderma (the manufacturer of Aklief, as well as Dysport and Restylane), tells Allure. “Aklief cream is approved for the topical treatment of acne vulgaris, and is the first topical treatment specifically studied and proven safe and effective to treat both facial and truncal (chest, shoulders, and back) acne.”

So, what exactly sets trifarotene apart from all the other prescription retinoids out there? According to New York City-based dermatologist Dhaval Bhanusali, the answer is twofold. First, it’s approved to treat acne in multiple areas of the body (face and trunk), which is brilliant because, for acne sufferers, it means that you can use the same single product on your complexion, shoulders, back and chest, as needed. This is also why the product comes in pump-dispenser packaging, rather than a tube of cream.

Second, as mentioned, it’s thought that trifarotene is gentler then other retinoids, which is good news for those of us who often experience the lesser-wanted side effects of retinoids, including irritation and flaking of the skin. Scientifically speaking, trifarotene is potentially gentler on skin because it “selectively targets the gamma retinoic acid receptor,” Bhanusali explains.

This is the most common retinoid acid receptor (or RAR) present in our skin. “By only targeting here, it essentially decreases the chance and amount of many of the traditional retinoid side effects like irritation, dryness, and stinging,” Bhanusali says.

Bhanusali has been following the approval process of Aklief since he first heard about the trifarotene molecule at presentations at national and international dermatological meetings. “I am hopeful this will provide an option for those who otherwise can’t use retinoids,” he says. “It’s ideal for face and body acne, especially [in] those who tend to have sensitive skin.”

Although it is considered gentler than other retinoids, trifarotene is still very potent; Aklief cream contains a concentration of 0.005 percent of the molecule. Aklief is expected to become available later this year, and you’ll need to get a prescription from your dermatologist in order to get your hands on it.

More acne news to check out: