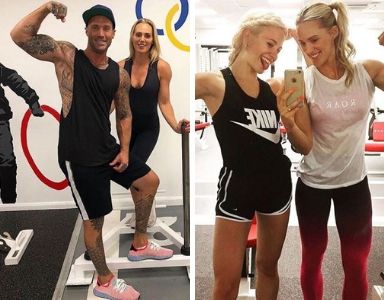 One woman’s diet rule is another’s deprivation but not where celebrity trainer Sarah Linsday – who trains Pixie Lott, Callum Best and Caroline Flack – is concerned, here are her smart women’s diet hacks

If you need some no-nonsense diet and nutrition advice do not leave this page – I mean it. Take some advice from someone who knows a thing or two about nutrition, diet and fitness and that’s Sarah Lindsay aka Roar Fitness Girl

Passionate about everything health and fitness, Lindsay really does practice what she preaches and has a unique ability to inspire and empower every single one of her clients to take control of their health and fitness.

Well if it’s good enough for the celebs that sure as hell means Sarah’s one to listen to, how does she stay in shape herself I hear you ask?  Well apparently a lot of her secrets come down to nutrition believe it or not.

I think the first port of call always has to be quality nutrition – quality food for optimal health. This means eating organic or unrefined food. It really is important that you become mindful of the quality of the food you are eating.

Then think balance, vegetables, protein, complex carbohydrates and essential fats, you need to be making sure you’re not missing out on any of those main macros.  Macros stands for macronutrients which are proteins, carbohydrates and fats, essential to include in every meal.

You read this diet or that diet or someone’s doing this, someone’s doing that. Or someone will say ‘oh I lost weight and I’m doing this’ – that’s because it will fit their lifestyle. There will be a reason why it suits them, but an off the shelf plan rarely suits anybody, never mind everyone.

So just because it worked for someone else does not mean it will work for you. People say things to me like, ‘Oh but they drink loads of wine they just don’t eat their dinner’.  That’s SO not a good thing, just because they’re thin and they do that doesn’t mean that it’s good for them or that it will be any good for you and your health and fitness journey.

It’s important that you get some professional insight so that you can find a plan that really works for you, that way you’re more likely to stick to it long term.

Food prep wherever you can.  Knowing about your food, learning and being able to make more educated food choices is the key to a successful diet.

One food I often meal prep are mini egg muffins. I often leave the house early in the morning and if I train early I don’t want to feel sick, so I need something quick and easy that I can take with me. These are perfect and so easy to make.

3. In a jug, beat the eggs along with a pinch of seasoning then stir through the cheese and spring onions.

4. Then carefully pour the mixture into the ham lined cups.

6. Remove from the tray and cool on a rack.

But with egg muffins, you’ve got control, you’ve made them yourself, you know what’s in them, and they still look pretty darn nice – when food looks nice it’s so much more appetising right?

We did a transformation with my friend Dean Edwards, who is a chef and he inspired the recipe. Dean did so brilliantly and was cover model ready by the end  of it. Dean was a chef for six years actually, but I helped him with his food and gave him nutrition advice.

He struggles to eat enough though and it was tough for him as I had him on so many calories during the transformation; around 4000 calories daily. It was too much for him, but he was happy to blend his food.

Dean saw me eating cold scrambled eggs and just said ‘you’re disgusting, why don’t you just do this?’ (the egg muffins).  So I took that recipe and I’ve made them ever since. I should tip my hat to him, I don’t think he invented egg muffins but he did tell me about them.

I eat for performance, I eat to perform on the gym floor and I eat to recover from my training sessions, so my food and training work together. I don’t like trying to diet for fat loss, though that usually means you end up eating well anyway because you want to eat food that gives you a lot of energy and doesn’t make you tired.

The quality of what you eat after a training session will seriously help your recovery, and therefore make the transformation journey fat easier. I like to eat for that purpose and focus on training and performing well. For recovery focus on eating protein, so fish such as salmon, tuna and meat such as chicken, turkey and lean mince.

That kind of positive mind set of eating to fuel and recover, instead of training to lose weight or eating to lose weight, which is quite negative, is how I try to get people to start thinking when they come to Roar Fitness. If you eat for performance and eat to enjoy your training, then the body will follow.

Rule #6 Treat yourself with REAL food

I know I’ll sound like a real dork, but because I like quality food and I like food that tastes real, I wouldn’t eat things like cake or doughnuts because to me those foods don’t really taste of anything. They also don’t have any nutritional benefits – it just doesn’t taste of food to me.

I like real flavours and I quite like the theatre of making your own food.  So I’ll put the time and effort into making a carrot cake or a chocolate avocado cake or something like that. It’s still high in calories and high in fat, but to me it tastes like real food.

Rule #7 Plan your meals around exercise

I eat four meals a day. My meals are mostly made up of protein and vegetables, which is the base of my four meals. I then time my carbs around my training.

If I’m training in the morning, I will add oats to my morning breakfast and then after training I will have a sweet cereal – something that’s high in sugar in my post workout shake. Such as, maple frosted flakes which makes it seem like more of a meal.

Having sugar after a training is important as it replaces muscle glycogen (carb stored in muscle to be used as energy). Exercise depletes these stores which you need to replace and it’s easier to absorb high glycemic/sugary carbs at this time rather than slow release carbs.

If I’m training in the afternoon, then I’ll have sweet potato or rice or another type of carbohydrate with my lunch. So bascially, I have some complex carbs before I train and then I have some sugary carbs after I train. WHY I generally keep carbs out of dinner or fats really, that’s because I eat quite late, so I try to keep it really lean.

For dinner I often have white fish, white meat and vegetables. It’s easier to digest protein so normally I’ll have seabass with vegetables.

Rule #8 There’s nothing wrong with a bit off coffee

Coffee often gets shunned but I am a total coffee addict. It’s not great to rely on coffee but there’s nothing really wrong with having it.

I actually only started drinking coffee when I was 30, because when I was an athlete, caffeine would go on and off the banned list.  Certain amounts of caffeine would be banned and we got drug tested all the time so I never really wanted to develop a taste for it.

I think when I retired though, and I could be a grown up I decided I wanted to like coffee; this thing that everybody was obsessed with – which clearly was a mistake because now I’m one of them and I drink coffee all day.

I think the fast food culture where it’s so easy to grab something means that people just aren’t mindful about what they eat anymore. They eat on the run, and if you haven’t planned their food, they will end up eating whatever looks nicest or whatever they crave or fancy.

Grabbing food when you’re hungry is dangerous.  When I’m hungry I will eat anything, the next food that is in front of me I will eat.

That’s another reason I tell people to prepare their food and why I myself prepare my food, because I have no willpower. If I’ve got the right food then I’m fine.

People say, ‘Why would you bother to meal prep when you can get everything on the run’, but it’s always the sneaky ingredients that people don’t realise what it is they are eating. So if you can’t meal prep, read the label.

Obsessed with peanut butter? You’re SO not alone

The rise of ‘freelancer depression’ and what to do about it

Do all humans have a type…on paper?