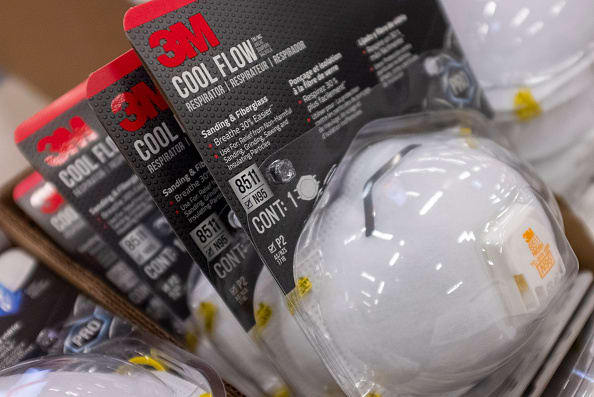 The company, Performance Supply LLC, tried to sell $ 45 million worth of masks at markups up to 500% to New York City officials while falsely claiming to be affiliated with the larger manufacturer, 3M alleged in the lawsuit.

“3M does not – and will not – tolerate price gouging, fraud, deception, or other activities that unlawfully exploit the demand for critical 3M products during a pandemic,” Denise Rutherford, 3M’s Senior Vice President, Corporate Affairs, said in a statement. “3M will not stop here. We continue to work with federal and state law enforcement authorities, and around the world, to investigate and track down those who are illegally taking advantage of this situation for their own gain.”

Performance Supply’s president could not be reached for comment from CNBC.

The shortage of respirators and other personal protective equipment has hampered efforts to slow the spread of COVID-19, forcing health care workers to wear the same gear for much longer than normal.

Other major companies, including Ford and Apple, have started to produce plastic face shields and other equipment to help boost supply.

The lawsuit comes after a heated back-and-forth between President Donald Trump and 3M. Trump announced a deal on Monday that will have the company importing more than 160 million respirator masks to the U.S. over the next three months.

Prior to the announcement, Trump and the company had a public disagreement over where the company was sending the masks. The company has said that the Trump administration asked it to stop exporting its masks to Canada and Latin America.

Trump said in a tweet on April 2 that the company “will have a big price to pay!” and suggesting that the federal government might use the Defense Production Act to direct the company’s production.

3M CEO Mike Roman pushed back, telling CBNC that it was “absurd” to say the company wasn’t doing everything it could to help the U.S. fight the coronavirus pandemic.