Clinical trials experts said these delays were comforting, in a way: They show that the researchers were following proper safety procedures. But for now, details about the nature of the volunteers’ illnesses are scant. And although pauses of vaccine trials are not unusual, some experts said that pausing treatment trials — like that of Eli Lilly’s antibody drug — is rarer, and perhaps more worrisome.

That trial was testing the treatment on hospitalized patients — a group that was already sick, and in which declines in health would not be surprising. So for a trial like that one to be paused, the safety concerns must have been significant, they said.

“I’ve done 50-plus monitoring committees, and it’s quite a rare thing to do,” said Tim Friede, a biostatistician at University Medical Center Göttingen in Germany, referring to his role as a safety monitor for drug trials.

For now, the companies behind the trials aren’t saying much. In a statement in September, AstraZeneca said it paused its trial to investigate “a single event of an unexplained illness.” But two vaccinated volunteers reportedly developed the same condition, an inflammation of the spinal cord called transverse myelitis.

When people volunteer for a late-stage trial, known as Phase 3, they randomly get a treatment or a placebo, and neither they nor their doctor knows which one they received. In the weeks that follow, they’re carefully monitored. People in a vaccine trial may get a checkup each month and record any symptoms they experience in a journal. People who get a drug while they’re hospitalized may be given blood tests and medical exams.

Mild symptoms, like a minor rash or a headache, aren’t enough to pause a trial. But when investigators notice a serious problem — known as an “adverse event” — they have to report it to the sponsoring companies. And the sponsors then have to report to both the Food and Drug Administration and their independent advisers, known as data and safety monitoring boards.

If the board or the company judges the adverse event to be particularly concerning, they may put the trial on pause — even without yet knowing if the event happened to someone who got the treatment or the placebo. 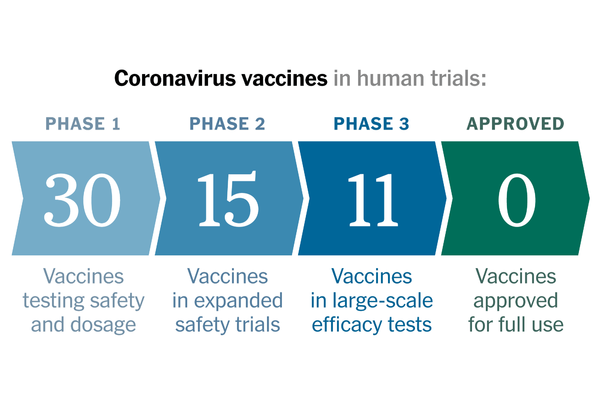 Dr. Paul Offit, a professor at the University of Pennsylvania and a member of the F.D.A.’s vaccine advisory panel, said that pausing a trial is a huge logistical challenge — especially for one like Johnson & Johnson’s, with plans for 60,000 volunteers in 10 countries.

Once a trial is paused, a safety board may ask for a volunteer who experienced an adverse event to be “unblinded” — in other words, to find out if the volunteer got the placebo or the treatment. If the volunteer received a placebo, then the treatment can’t be the cause of the event and the trial can continue.

If it turns out that the volunteer got the treatment, the board does a flurry of detective work. The members look over the medical records. They may ask for more information about volunteers’ health or even order new tests — not just for the people who experienced adverse events, but for everyone in the trial.

The board uses this evidence to come to a conclusion about whether the treatment most likely had anything to do with the event. On very rare occasions, for example, some vaccines can cause a nerve disorder called Guillain-Barré syndrome. But the condition takes weeks to develop. If a volunteer shows signs of Guillain-Barré syndrome on the day of a vaccine injection, it can’t be the cause.

Regulators then review the decision of these boards and may accept it or ask for more information. For trials that are running in several countries at once, this review can make pausing a trial even more of a challenge. After AstraZeneca paused its global trials on Sept. 6 for a review, regulators in Brazil, India, Japan, South Africa and the United Kingdom all gave the green light for the trial to resume. But American regulators are still keeping the U.S. trial on pause as they continue to look over the evidence.

If a safety board rules that an adverse event most likely was not a result of the vaccine or treatment, it may allow the trial to start up again. If, on the other hand, there’s some urgent problem — a contaminated batch of drugs, for example — the trial may have to stop. When the evidence isn’t so clear, the board may let the trial resume with extra tests or exams. A second case of the same event might be more common than you would expect from chance, forcing the trial to end.

But there are some important differences in the way pauses work in trials for vaccines — like Johnson & Johnson and AstraZeneca’s — and for drugs like Eli Lilly’s. Vaccines are designed to be given to millions or billions of healthy people. So they require extreme safety. If even one person in a vaccine trial gets sick, that warrants a closer look.

“It is not at all uncommon for this to happen,” said Dr. Anna Durbin, a professor of international health at the Johns Hopkins Bloomberg School of Public Health. “In the vast majority of cases, the trial continues.”

And in a trial as big as Johnson & Johnson’s, you expect some sort of adverse event to happen, regardless of the potential risks of the treatment being tested. It would be strange if investigators reported nothing. “Then you’re concerned that the surveillance system for adverse events isn’t working,” said Saad Omer, the director of the Yale Institute for Global Health.

Dr. Stanley Plotkin, a vaccine expert and professor emeritus at the University of Pennsylvania, was not surprised that two vaccine trials were paused. After all, a huge number of vaccine candidates — 43 to date — are being tested in clinical trials. Many of them are based on cutting-edge designs that have never been licensed before. “It means a lot of new ground is being broken,” he said, “so people are being doubly careful.”

But pauses of treatment trials are not as common. There’s a simple reason for the difference: The people getting drugs have a disease, sometimes a very serious one. For Eli Lilly’s trial, for example, researchers are only recruiting people who are already hospitalized with Covid-19. In such a group of seriously ill people, even a death would, sadly, not come as a great shock.

As a result, the evidence for an adverse event often has to reach a higher bar to pause a drug trial. Indeed, that seems to be the case with the paused Covid-19 trials. One patient was enough to cause Johnson & Johnson to halt its trial. But a National Institutes of Health spokeswoman said the Eli Lilly trial was paused because the safety board found that the patients who had received the antibodies showed a different “clinical status” than those who had received a placebo.

Dr. Eric Topol, a professor of molecular medicine at Scripps Research in La Jolla, California, is still hopeful about the antibody treatment. He observed that both Eli Lilly and another company, Regeneron, have already given monoclonal antibodies to thousands of people with Covid-19 without any previous reports of problems (although some of the trials were on people with relatively mild cases). “I’m still fairly optimistic,” he said.

Although pausing trials is a standard procedure, it’s not a familiar one. Before the pandemic focused the world’s attention on clinical trials, researchers would pause trials and investigate adverse events without much notice. If a paused trial has to be abandoned, that pause might get mentioned a year later in a scientific paper about the trial.

But if a trial resumes and ends successfully, then the pause may just seem like an irrelevant detail. “You may very well never mention that,” said Peter G. Lurie, president of the Center for Science in the Public Interest and former associate commissioner for public health strategy and analysis at the Food and Drug Administration.

But in a pandemic — especially one in which the president of the United States claims without justification that a vaccine will be ready by Election Day and that monoclonal antibodies are a miraculous “cure” for Covid-19 — these pauses are drawing attention like never before. “That is something we are not used to at all,” Dr. Friede said.

Nevertheless, Dr. Friede said, it is vital that researchers stick to their protocols, no matter the pressure they feel to speed things up. “That’s a very difficult situation to be in, but I think it’s very important that we keep up the standards,” he said.

No matter what the outcome of the pauses, many experts found the caution heartening. “It shows me that people are taking safety very seriously,” Dr. Durbin said. “This is an example of how things are supposed to work.”